This may seem trivial to some or not worth the time to read for others, but I was around in the early years of women's judo and believe there is a need to accurately portray the history of women's judo, in particular, here in the USA. 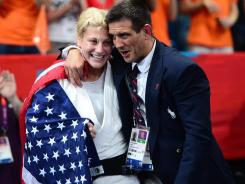 Kayla Harrison made history. She's the first U.S. judo athlete to win a gold medal in the Olympic Games. She is an authentic success story and deserves the honors she has won. 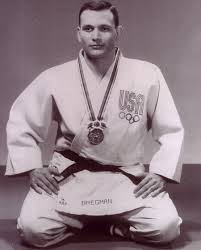 "Demonstration" sports have no less importance and are of equal standing to any other sport in the Olympic Games. The gold medals won by Nakatani below right, 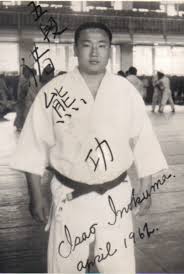 Okano,Inokuma and Geesink in Tokyo in 1964 are as valid as any gold (or other) medal won in any year in any

Olympic Games by any athlete. Likewise, the medals earned by Lynn Roethke in the 1988 Olympics and Jim Bregman in the 1964 Olympics are as valid as the medals won by every other medal winner in every other Olympic Games. I am friends with both Lynn and Jim and know of the sacrifices they made and how hard they had to fight to win the Olympic medals they did. That aside, fair is fair and it's important to give credit to those who deserve it.

Real history is real history and what actually happened leading up to including judo in the 1964 Olympics is that the IOC accepted judo as "an optional sport at the discretion of the host country." In 1958, when the IOC         awarded the 1964 Olympic Games to Tokyo, the organizing committee in Tokyo immediately petitioned the IOC to include judo. As some of you may remember, once the IJF and IOC worked out the weight classes, judo was accepted, but as an "optional" sport. Judo was accepted as a "full" sport for men in the 1972 Munich Olympics. I n 1988, the IOC permitted Korea to include both taekwondo as a demonstration sport and judo for women as a "demonstration" sport. Taekwondo was again included as a demonstration sport in 1992 (eventually gaining "full" status in 2000). Judo for women was accepted as a "full" sport for the 1992 Olympics.

In 1980 the IJF recognized women's judo and the first World Judo Championships for women was held in New York. That opened the door for women's judo to eventually be included in the Olympic Games. Growing Judo, September 2012 Page 10

In 1988, women's judo was included in the Olympics in Seoul as a "demonstration" sport. As Nicholas Soames and Roy Inman wrote in their excellent book OLYMPIC JUDO: HISTORY AND TECHNIQUES: "The term 'demonstration' was nonsense. This was a real competition in all but name..." The top 8 women in the world in each weight class competed in the 1988 Olympics. Finally...women's judo had made it to the Olympics.

The USA won 2 medals in the women's judo event in 1988. Lynn Roethke won the silver medal in the 61 kg. class and Margie Castro won the bronze medal in the +72 kg. class. Lynn won her silver medal before Margie did due to the order of the competition, so, for the record, Lynn Roethke is the first U.S. female judo athlete to win an Olympic medal of any type.

This, by no means, diminishes the historic achievement of Kayla Harrison. She deserves credit for being the first U.S. judo athlete to win an Olympic gold medal. Winning a medal in the Olympic Games is a huge deal. And because of that, we should give credit to each and every U.S. judo athlete who wins a medal in the Olympic Games. Overall, NBC's coverage of the Olympic Games in London has been good, but they made a mistake in this case and it needs to be corrected. And, to be honest, women's judo was sneered at by the powers-that-were in judo and female judo athletes had to fight to earn the respect they finally gained from the judo community at large. I fondly remember the first year (1973) that there were women's judo tournaments on the national level. The YMCA Judo Nationals in Racine, Wisconsin and the USJA Women's Judo Championships in N. Little Rock Arkansas attracted some of the toughest female judo athletes in the United States. It was those women judo athletes, their coaches and supporters who paved the way for women to gain full recognition and acceptance in the judo community at large. Kayla Harrison and

Marti Malloy are the latest in a long line of exceptional and outstanding female judo athletes in the United States.