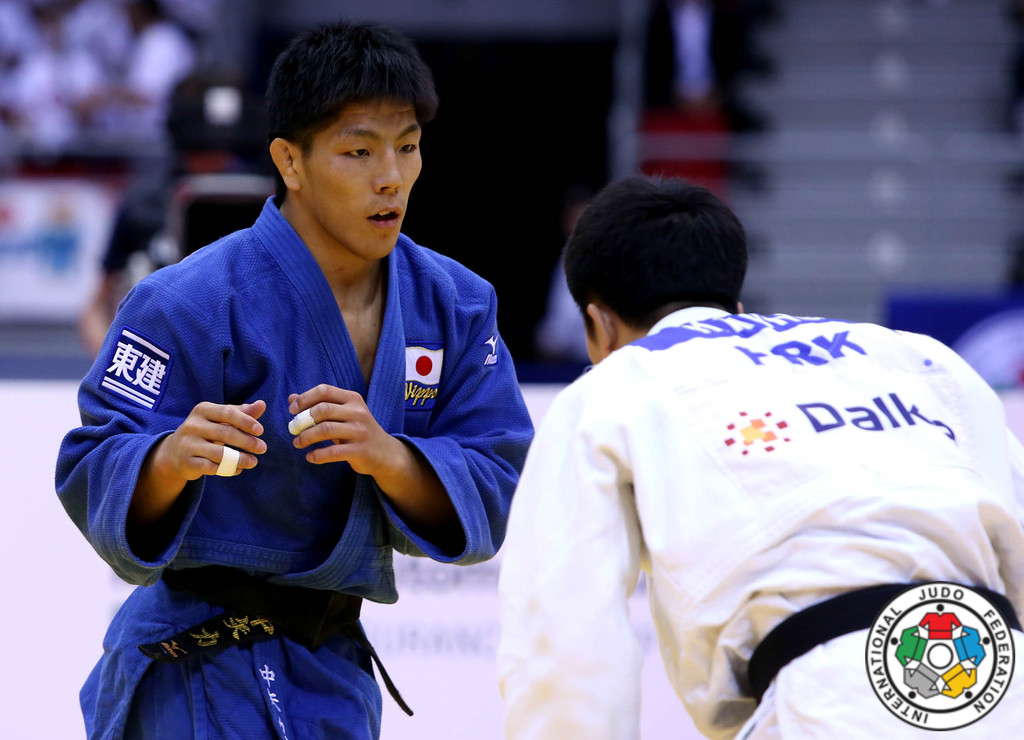 The third day of the World Championships, Chelyabinsk 2014, was a pulsating feast of judo as two new champions were inaugurated at the Traktor Sport Arena.

The women’s -57kg and men’s 73kg categories were contested as reigning world champions Rafael SILVA (BRA) and ONO Shohei (JPN) were unable to impose themselves to anywhere near the level they did when they won their 2013 gold medals.

Day three belonged to Japan who fielded two judoka in each category and registered a clean sweep of the titles as UDAKA Nae (JPN) and NAKAYA Riki (JPN) were the hero’s as Olympic champion MATSUMOTO Kaori (JPN) and ONO were left reeling by defeats in the preliminaries.

The United Arab Emirates made history as the highly-regarded Victor SCVORTOV (UAE) won his country’s first medal at the premier competition on the IJF World Judo Tour.

“This medal will greatly help the development of judo in UAE. It’s a real example for the youth. We are looking for a new generation of judo players who will be ready to follow the path drawn by Victor today. I am happy for the team and I wish good luck to our other athletes.”

Before the final block there was a special contract signing between the International Judo Federation and leading international sports brand and manufactures Green Hill.

-57kg: UDAKA proves herself at top level while MATSUMOTO falters

Tokyo Grand Slam winner UDAKA Nae (JPN) won the world title for Japan as the 29-year-old handed Telma MONTEIRO (POR) her fourth defeat in a world final. The result was in stark contrast to Olympic champion and overwhelming favourite MATSUMOTO Kaori (JPN) who went out in the preliminaries by juji-gatame against Marti MALLOY (USA) after just 24 seconds. UDAKA, who took silver at the Paris Grand Slam in February, had never won a medal at this level before today while the immensely disappointed MONTEIRO had to suffer at the final hurdle yet again. UDAKA received a shido for passivity after 90 seconds before MONTEIRO was penalised for a false attack which sent the scoreless contest into golden score. The Japanese judoka searched for an opening with ashi-waza and unsettled her opponent sufficiently enough to lose focus and go for a leg grab which resulted in hansoku-make.

UDAKA, who reacted by raising both her hands in the air and waving to the plentiful Japanese fans in the crowd, said: “MATSUMOTO Kaori is very popular in Japan and everybody was waiting for her to be the world champion here in Russia. I wanted to do my judo, to enjoy fight after fight and to do my best. This is the title that I wanted but it is not my final goal. I want to reach the level of Matsumoto. Until now, I was only able to win in Japan. Now I know that I can also win abroad.”

MONTEIRO said: “Today is my fifth medal at the World Championships. I knew from the beginning of the day, that I was not among the favourites but I didn’t want to be a favourite, I wanted to win a medal. I believe in my judo and in my work. I am just thinking about winning and until the final that is what I did. I am happy. I had some great fights today. I wanted people to know that I will never give up until I decide to stop. But this time has not come.”

In the first semi-final UDAKA subdued Olympic bronze medallist Automne PAVIA (FRA) by scoring a yuko from an osoto-gari before receiving three shido penalties for passivity as Japan guaranteed another medal. PAVIA was unable to threaten UDAKA with her usual power and precision on the edge of the tatami and entered the repechage.

In the second semi-final MONTEIRO downed World Judo Masters winner DORJSUREN Sumiya (MGL) with a rousing display which ended with an ippon for the former from a morote seoi-nage who went close to taking the lead with a drop seoi-nage effort.

The first bronze medal was won by 22-year-old Sanne VERHAGEN (NED) who saw off DORJSUREN to decide the first medal winner on day two. Former Junior world and Junior European silver medallist VERHAGEN made her day count on the world stage as she scored a yuko from a drop seoi-nage which was the only score in the contest.

The Dutch fighter said: “It is my first medal at this level so I am happy of course. Everything went very well until the quarter final against the Japanese who surprised me. Then I had to get focused again to go for bronze. Honestly I didn’t expect such a result. I was dsappointed by my fight against UDAKA but of course overall I’m really happy.”

The second bronze medal was won by PAVIA as she inflicted the second humbling of the day for reigning world champion Rafaela SILVA (BRA). The latter led with a yuko from countering an uchi-mata by rolling her opponent who fired back with an uchi-mata which had more substance to earn the same score. In golden score SILVA was penalised for passivity after two minutes of added time to capture her first world medal and deny SILVA a palce on the podium this year.

PAVIA said: “That’s it! I’ve got it! This world medal is what I’ve wanted for so many years. I was feeling really good all day long even if I had the impression at one point that the medal won’t be for me this year again. Last year in Rio, I was in the same position, losing in the semi-final and having to regain my composure for the bronze medal fight but I was not able to do it in Brazil. I didn’t want that to happen again but SILVA is the athlete who I am the least comfortable with on the circuit as her judo troubles me a lot. That’s why this bronze medal tastes even better.”

-73kg: NAKAYA back to his best to wear gold in Russia

Olympic silver medallist NAKAYA Riki (JPN) returned to the summit of the -73kg category as he rediscovered the form which saw him win world gold in 2011 and Olympic silverware a year later. NAKAYA, 25, was tasked with a tough assignment against Ulaanbaatar Grand Prix bronze medallist HONG Kuk Hyon (PRK) who, while a staunch outsider before today, gave the world a sublime showing as he kept winning to contest the final. NAKAYA was penalised with a shido for a false attack after 90 seconds and, after both judoka infringed for negative gripping, NAKAYA sealed his return to the top of the sport with a ko-uchi-gari earning ippon with 94 seconds left.

NAKAYA said: “Three years ago I was world Champion in Paris. But since then, I was not able to find again my sensations and my best judo even if I got the silver at the Olympics. So it took me three years to be back on the top of the podium. Last year I lost in the quarter final, but this morning I was really confident and felt stronger and stronger throughout the day.”

In the first semi-final HONG met 21-year-old Yertugan TORENOV (KAZ) who was thrown with a hara-goshi for waza-ari and ended up losing by ippon.

In the second semi-final NAKAYA bested Budapest Grand Prix winner Victor SCVORTOV (UAE). The Japanese fighter was close to being caught with a de-ashi-barai but just managed to keep his balance before registering a yuko score which he protected to advance to the final.

The first bronze medal was won by SCVORTOV who made sure that the U.A.E flag would be among those raied at a World Championships for the first time in the history of judo in the country. SCVORTOV and World Military Championships winner LEE Young Jun (KOR) traded shido penalties and were tied to force the contest into golden score. SCVORTOV seized the moment as he scored ippon after 64 seconds of extra time by countering a ouchi-gari with a ko-soto-gake.

SCVORTOV said: “It is my best result at the world championships. I had a very good season and today I win the first ever medal for the United Arab Emirates at the world championships. This is fantastic and this result is the consequence of a fantastic team work. Of course I was on the tatami today, but this victory goes also to my coach, my teammate, to the federation and to all the people who are supporting us.”

The second bronze medal was won by home favourite Musa MOGUSHKOV (RUS) who repeated his 2011 world bronze with a win over TORENOV. MOGUSHKOV was penalised with a shido for passivity which gave him the push he needed as he worked his way into a ko-uchi-gari for waza-ari which went on settle the contest.

MOGUSHKOV said: “I dedicate this win my mother who brought me up from an early age on her own and this is for her. I was very disappointed with how things went for me at London 2012 and afterwards I even thought about leaving the sport but my mum insisted I stayed and it’s because of her I’ve accomplished this result today.”

Plus a look back at last years World Championships: Women -57kg & Men -73kg 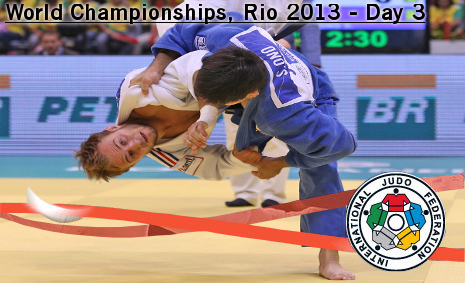