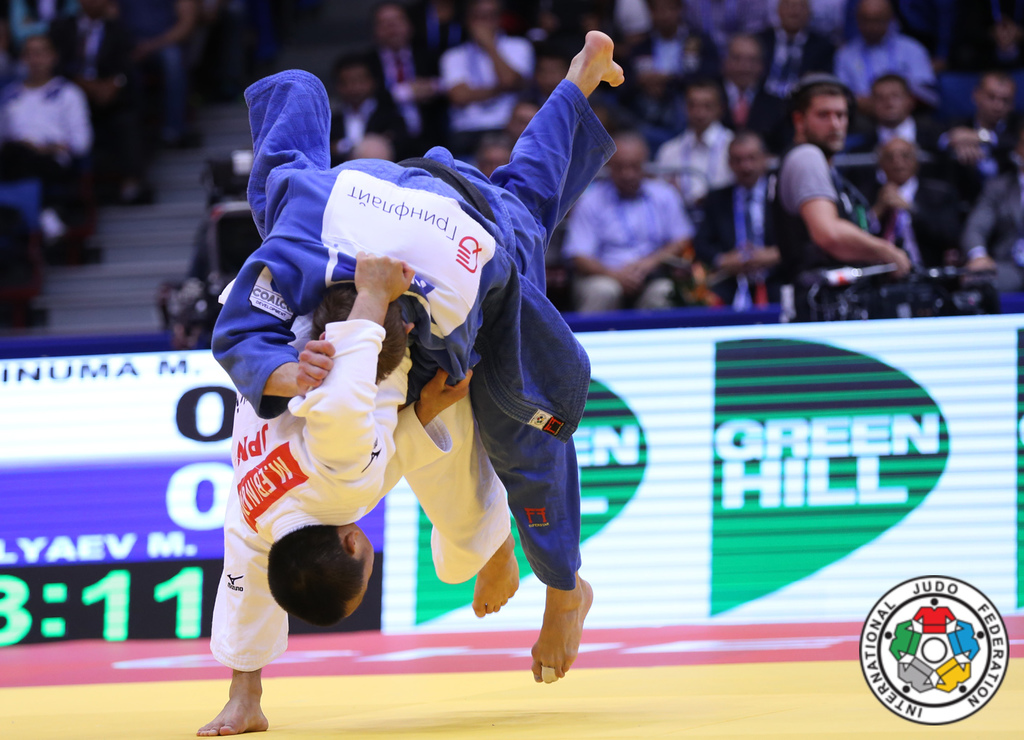 The World Championships, Chelyabinsk 2014, continued with an explosive day of judo which was savoured by an international audience on Tuesday at the Traktor Sport Arena.

Two more world champions were crowned on day two as the women’s -52kg and men’s –66kg titles were decided in front of an avid crowd of knowledgeable judo fans.

Before the final block, the accredited media attended the first press conference at the competition venue as delegates talked about the highly-encouraging start to judo’s annual extravaganza.

The Majlinda KELMENDI (IJF) era is in full flow as the European champion won her second consecutive world title. Judo hero KELMENDI started brightly against European bronze medallist Andreea CHITU (ROU) in the -52kg final and immediately tested the defence of her opponent with an uchi-mata effort. The opening score was inevitably from the reigning champion who scored a waza-ari after 95 seconds from a powerful o-goshi before adding a yuko from an uchi-mata as KELMENDI was in all-out attack mode. KELMENDI put her head in her hands when she was awarded the contest by the referee and momentarily laid down on the tatami as she cherished every second on the tatami.

KELMENDI said: “I am so happy. It’s unbelievable. You know, being the current world champion, I came here as a favourite but I was ready for any medal. So the gold is fantastic. I know that everybody was following me live in my home country. They must be so happy now. Tonight I really want to thank the IJF President, who has been supporting me for many years. He promised me to come if I would be gold medallist. I am waiting for him (laugh). This morning I was really nervous but fight after fight, I was feeling better and better. I am happy that I can make my people happy.”

CHITU said: “I am really happy tonight with the silver medal. Of course I train everyday very hard for gold and I came here to be world champion but I’m happy with any medal and the silver is just great. I felt really good all day long.”

In the first semi-final KELMENDI blocked the route of Natalia KUZIUTINA (RUS) to deny a home finalist in the -52kg category. The eventual winner received a shido after two minutes for passivity before her rival was penalised for going out of the area. With 34 seconds remaining KELMENDI made her move as she rolled the Russian on edge of tatami by countering an uchi-mata attack. In the second semi-final CHITU bested world silver medallist Erika MIRANDA (BRA) who was therefore assigned to repechage duty and a bid for a bronze medal. The Romanian fell behind to an ouchi-gari after just 27 seconds and a minute later both judoka were penalised with a shido for passivity. CHITU saved her best until last as she struck with 38 seconds remaining as she won by ippon.

The first bronze medal was won by MIRANDA who put the disappointment of her semi-final defeat behind her to defeat Yanet BERMOY ACOSTA (CUB). The Brazilian is already casting herself as one of the early favourites for the Rio 2016 Olympics and this result shows her consistency at the highest level which bodes well for the next Olympiad. MIRANDA won on shido penalties as BERMOY ACOSTA was unable to impose herself in the contest. MIRANDA said: “I would have been very sad to come back home without a medal, but I came here for golds so I am a little sad. I will train harder to be on the top of the podium next time.”

The second bronze medal was won by KUZIUTINA as the home crowd lapped up the performance of their compatriot as she denied 30-year-old MA Yingnan (CHN) who put forth a titanic effort on day two in the best result of her career. MA was penalised with a shido for going out of the area but KUZIUTINA was not going to end her day without another score as she produced a determined sumi-gaeshi which eventually registered a yuko as MA could not hold out against the technique.

Olympic bronze medallist EBINUMA Masashi (JPN) remarkably won his third consecutive world title as he defeated the accomplished Havana Grand Prix winner Mikhail PULYAEV (RUS) in the -66kg final. EBINUMA, who won world gold in 2011 and 2013 either side of a bronze medal at London 2012, is a class apart and at 24 is already a talent for the ages. With the most atmospheric setting of the competitions so far, the Japanese ace scored a hane-goshi for ippon and winning took a deep breath as he realised his goal and won Japan’s second gold medal in as many days. The stunning victory for EBiNUMA saw him become part of an elite band of Japanese judoka who hold three world titles as he joined legends KOGA Toshihiko and Japan Head Coach INOUE Kosei as a three-time world champion.

EBINUMA said: "I felt good, very happy to win and I will strive to build on the success at the Olympics. Since the beginning of the competition until the end of the last fight, I was very nervous, but the excitement only spurred me on. Yesterday's loss for TAKATO Naohisa taught me a lot. I am very grateful to him for what he told me how to fight Russian and it is partly thanks to him that I won today."

PULYAEV said: "There was a great desire to win, but in the final it was not enough. Tactically I got it wrong and it was necessary to act differently. Until today, the number of victories was equality - in one battle he won in the second I won. On the whole, I am satisfied with silver, especially since this is my first medal at a World Championships. I dedicate it to my family and coach."

In the first semi-final EBINUMA faced Loic KORVAL (FRA) in a contest which really pitted the best of the best against each other in the form of the reigning world kingpin and the European champion. KORVAL battled and battled but there was no way past Japan’s leading man who progressed as a result of two shido penalties against the Frenchman as EBINUMA registered an unblemished record. In the second semi-final PULYAEV had his first encounter with a Japanese fighter as the plucky TAKAICHI Kengo (JPN) forced himself into contention in Chelyabinsk. With 13 seconds left the Russian broke the resistance of the 21-year-old Budapest Grand Prix winner to the delight of the home faithful as he delivered a waza-ari which consigned TAKAICHI to his first defeat of 2014.

The first bronze medal was won by Kamal KHAN-MAGOMEDOV (RUS) who countered beaten semi-finalist KORVAL with an ura-nage following a drop seoi-nage from the French fighter as Russia built momentum on day two. That yuko score separated the judoka after five minutes and the crowd chanted the name of their bronze medallist who pointed to his coach to acknowledge his contribution while the classy KORVAL clapped the man who beat him after the contest was awarded to the Russian.

said: "A bronze is a nice reward, but of course, I would like to have at least reached the finals. This season, I won another silver in the Baku Grand Slam and both medals are very valuable for me because I was in a hard struggle. I was pleased that I was able to take the bronze medal at the World Championships in Russia."

The second bronze medal was won by the phenomenal Georgii ZANTARAIA (UKR) who defeated TAKAICHI. ZANTARAIA missed with an uchi-mata effort before threatening with a trademark hane-goshi. The dynamic Ukrainian prevailed as a result of a shido being given to the Japanese judoka for not taking a grip. ZANTARAIA sprinted to his coach to celebrate while TAKAICHI slowly left the tatami as he cut a forlorn figure but gave more than a respectable account of himself on the biggest stage of his career.

Plus a look back at last years World Championships: Women -52kg & Men -66kg 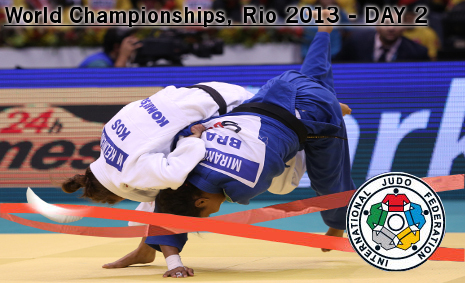