What do Norwegian Ambassador to Indonesia Stig Traavik and Indonesian Hollywood actor Joe Taslim have in common? They both started their early careers as internationally competitive judo athletes. Last week in Jakarta, Traavik and Taslim fought a friendly match and shared their stories on how judo has made them who they are.

“This is the first time Joe and I met in person, actually. But we’ve been following each other on Twitter for a few months,” said Traavik, who competed in the 1992 Summer Olympics in Barcelona. Traavik and Taslim have toyed with the thought of training together for some time.

“It’s been four years since I last trained,” said 32-year-old Taslim, who retired from his 12-year career with the Indonesian Judo National Team in 2009 following repeated injuries. However, a bad knee and the need to take extra care did not stop Taslim from giving his best fight for the night.

The dojo, or judo training hall, was filled with a several dozen uniformed judokas (the name given to judo practitioners), all wrestling, locking and throwing each other while trainers gave them tips on perfecting their techniques. The judokas ranged in age from their mid-teens to late forties, and hailed from different countries and walks of life. But in the dojo, they put their differences aside and united in one mission to train in an honorable fight.

As the judokas paired up on the mat for groundwork practice, Traavik and Taslim bowed down to each other. With a quick lock, Taslim wrestled the ambassador and nailed him on the floor. But with a persistent struggle, Traavik eventually turned things around and ended up having Taslim pinned face down. Even then, Taslim managed to free himself from Traavik’s powerful grip and the two men rolled over and laughed.

Both displayed impressive techniques that could only have been achieved through years of dedicated practice.

“Thanks to judo, I have friends all over the world. Whenever I arrive in a country, all I have to do is show up and ask the sensei, ‘May I join your training?’ And the answer is always yes,” Traavik said.

Japanese polymath Jigoro Kano, who founded judo as a derivative of jujitsu in the late 19th century, once said the martial art transcended mere combat. Traavik and Taslim agree that judo is full of positive values that go a long way in life.

“I wouldn’t be the actor I am now if it wasn’t for judo,” said Taslim, who started acting professionally in 2007 following the economic crisis that affected the sport and left him with too much spare time. 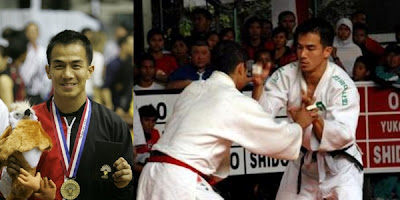 “The most important thing [judo has taught me] is honor, because when you respect what you’re doing, you give everything.”

Taslim said that a judoka honored his or her opponent by being the best fighter possible and thus giving the opponent the opportunity to reciprocate.

“In acting, the spirit is similar.

But in acting, you give your energy because it’s your responsibility to make a film good. When we deliver a good scene, it’s not me, it’s not you, it’s all of us.”

“Karma,” the 2008 horror film in which Taslim made his screen debut, did not perform very well at the box office.

“I learned a lesson from making ‘Karma.’ I made mistakes, it was not my best performance and I tried to evaluate and to be better the next time,” he said.

“ ‘The Raid’ was my third film and I was pretty lucky. It opened the door for me to go international and to be part of the ‘Fast and the Furious’ franchise. I think it’s a dream come true.”

Similarly, Traavik admitted that judo had taught him that winning did not come easy.

“I think it was good that I didn’t win in the beginning,” said Traavik, who in 1977 was just nine years old when he picked up the sport, but didn’t start winning until his mid-teens.

But once Traavik experienced victory, he became the best in Norway and started representing his country in European Championships and other international competitions.

“By then I had understood that it’s hard work that makes you win,” said Traavik, who also studied full time throughout his judo career.

“I trained early in the morning, then I’d go to the university and study, then I’d attend the second training in the evening. Whenever I traveled, I brought my books with me.”

Traavik finished his studies in 1994 and joined the Royal Norwegian Ministry of Foreign Affairs. “Judo is still a very important part of my life,” added Traavik, who trains weekly in a local dojo.  judoinside.com

Traavik still competes in veterans’ competitions, and is preparing to fight in Abu Dhabi this coming November, and in Ukraine next year.

“These days I don’t have as much time to train as I used to. But if I’m going to be in a competition, I push myself. I get up early in the morning, I do my training, I stay in shape. I tie myself to the mast.”

A frequent question Traavik gets asked is how different his diplomatic career has been from judo.

“As an ambassador here, I also have to give my best to present my country in a good way. I need to make sure that my team delivers the best they can. You win together, you lose together.”

That said, Traavik admitted that judo had taught him the values that made his diplomatic career strong.

“[It’s about] having respect for the people around you. If you are not scared of people, you approach them, you show them what you want without being aggressive, we often find out that there is a common ground,” he said.

Having earned a silver medal for Indonesia in the 2007 Southeast Asian Games, Taslim agreed that athletes were under great pressure when representing their countries in international competitions.

“When you win, it’s a glory for every citizen. But if you lose, you feel that you’ve disappointed not just yourself but also your country. You represent a lot of people, who have been giving you hope to win,” he said.

Taslim said that his decision to retire from judo and pursue acting was smart and well-timed.

“You have to love your job to be good at it. I love judo, I love acting, so both are going pretty good,” said Taslim, who has been cast in another upcoming martial arts film in 2014.