Richie’s judo journey began in 1980, when following the path of his grandfathers. He became part of the third generation in his family to practice judo at San Fernando Dojo, which started back in the 1930's with Grandpa Ralph Nakamura & brothers. In 1986, Richie’s judo classmates convinced him to start competing on a regular basis. In his first novice tournament Richie placed first and was hooked! He continued competing in all the local, state, and national competitions – falling just short of placing in most of them.

In 1988, things took a turn and Richie placed third at the USJI High School National Championships. During his competitive years, he earned six gold medals at high school and junior national championships, and in 1990 was honored with a USJI All American Award. By the time he turned 18, Richie became the ninth judo black belt in his family.  In 1991, Richie gradually left judo competition to concentrate on his college education.

Richie returned from college and began assisting his head sensei, Roy Murakami, with teaching judo at San Fernando Dojo in 1996. After many years of dedication to judo, not only at San Fernando but also for Nanka Judo Yudanshakai, Richie was honored with the invitation to become the Head Instructor at San Gabriel Judo Dojo in December of 2013. 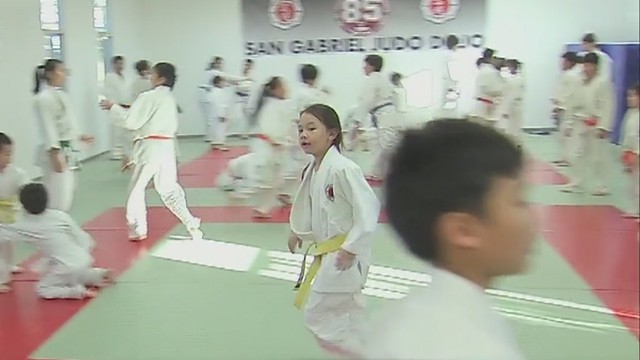 Move over Ronda Rousey a whole new generation of Judo masters are on the horizon. Many of them girls!!!

As head sensei, Richie has accomplished the following:
• Increased the club’s membership to over 130 students and growing on a weekly basis.

• Has made several local, state, and junior national champions.

• At the national competitions, his students have earned seven gold medals, nine silver, and six bronze.

• In 2016, his student, Ryder Yoshitake, was named Most Outstanding Male Competitor at the Summer Nationals.

• In 2016, his student, Isabella Coulter, was named Female Athlete of the Year at the California State Games.

• In 2016, Richie was proud to accompany two San Gabriel judoka who earned spots on the U.S. team at the Infantil Pan American Judo Championships in Santo Domingo, Dominican Republic, and coach them to third and fourth in their divisions.  While in Dominican Republic, Richie also coached, Nazareth Chukulyan from Hayastan Dojo, who won a silver medal in the PanAms and a gold medal in the Caribbean Cup.

• In 2016, at the Lil Judokas 4-7yo Championships, his students, Waverly Tamanaha and JaRon Phan, were named Most Outstanding Female and Male Competitors.

• In 2016, Richie had a live television broadcast of San Gabriel Dojo with Sandra Endo on the FoxLA Morning News.

• In 2012, Richie directed our club’s 85th Anniversary Tournament which had over 460 competitors.

• Has lead our club to a 10th place showing at the 2016 National Championships, along with several 1st Place Team trophies in tough tournaments, such as 2016 Golden State Open, 2015 Nanka Team Championships, 2016 Taishi Invitational and 2016 Lil Judokas 4-7yo Championships.

In addition to coaching, Richie is also a USA Judo N4 Referee, and has either refereed or coached at every USA Judo national championship over the past 4 years.  He enjoys assisting the Referee Commission with setting up the CARE systems at the national championships to help assure the fairest arena possible.

His students, sensei’s, and parents are most impressed by his commitment to San Gabriel Judo Dojo, as he commutes to the dojo three days a week from Las Vegas, Nevada to Los Angeles! Richie’s dedication to all that he does – judo, work, kendo (his other martial art of choice) – make everyone proud to know and be associated with him.

I’d also like to whole-heartedly thank all my super amazing SG judokas, parents, senseis and longtime supporters of San Gabriel Judo Dojo. I wake up every day excited and motivated to do Judo with the greatest team in the world.

Last, but not least…Big Shouts to my parents, brothers, sisters, aunties, uncles and My Judo Family at San Fernando Dojo with Big, huge exclamation marks to my Bachan*, Head Sensei, Auntie Anne & Paco Iniguez, who are not here today, but busting a tear for me right now up in heaven.  Eternally grateful.  Domo arigato gozaimasu!” – Richie Endow