It is with great sadness that we inform you that Keiko Fukuda Sensei passed away at about 2:30 PM Saturday, 2/9/13. Fukuda Sensei was 99 years of age.

Keiko Fukuda was the highest-ranked female judo practitioner in history, holding the rank of 9th dan from the Kodokan and the United States Judo Federation, and 10th dan from USA Judo, and was the last  surviving student of Jigoro Kano.

“Be strong, be gentle, be beautiful.” 97-year-old living legend Keiko Fukuda (Kodokan 9th dan), the highest-ranking woman in the history of judo and the only living disciple of judo’s founder, lives her life by these words.

Her motto is also the title of a documentary about her inspirational life. Filmmaker Yuriko Gamo Romer and her Flying Carp Productions have completed shooting and are now trying to raise the finishing funds as they edit the film.

Weighing in at less than 100 pounds, Fukuda is the world’s oldest working professional athlete. She lives and still teaches judo today, in San Francisco.

1988 Olympic judo champion Kaori Yamaguchi sees Fukuda as a trailblazer: “If it hadn’t been for Fukuda Sensei, there might be no women’s judo in the Olympics. And certainly no option for myself and [2008 Olympic champion] Ryoko Tani to have children and compete in judo.”

Life should have been easy, comfortable, and predictable for the granddaughter of a samurai. This might have been the case if Fukuda, born in Tokyo in 1913, had chosen to walk the conventional path of a samurai woman. Instead, she chose to “marry judo,” leave her homeland, and struggle up the ranks of the male-dominated Kodokan judo world. 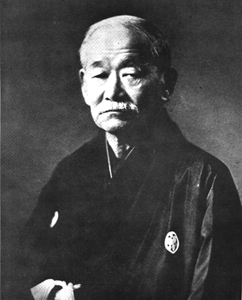 Fukuda’s destiny was set before she was born. Her grandfather, Hachinosuke Fukuda was a master of jujitsu. His top student, Jigoro Kano, went on to transform jujitsu into what is now known as judo. Hachinosuke had died when Keiko’s father was only a child. It wasn’t until 1934, when she was 21, that she met Kano and learned about her grandfather for the first time.

Kano then invited her to study judo at the new women’s division at his school, Kodokan. This was the beginning of a lifelong passion. Everything else had to give way, even the possibility of marriage. Fukuda had been studying ikebana, calligraphy and the shamisen, the arts and skills of a samurai-class wife. But she rejected her family’s marriage arrangements when she realized to perform her duties as a wife, she would have to give up her beloved judo practice.

Fukuda soon learned that judo was dominated by men. Women could participate, but there was always a sense of not quite being equal. This would be an issue that she would confront throughout her life. She commented, “This old-fashioned attitude had them believing that it was okay for women to just stay at the bottom ranks.”
Fukuda fought and flowed through these challenges, using what she learned in judo. She said it was early in her life that she developed her life’s motto, tsuyoku, yasashiku, utsukushiku (“Be strong, be gentle, be beautiful.”)

Kano died in 1938. Saddened by the loss of her master, and to honor his request that she continue to carry the legacy of judo around the world, her commitment deepened. Throughout the devastation of World War II, Fukuda recalled, she continued to practice and teach judo. During the firebombing, she ran through fields of rubble and burning embers to get across town to her judo classes, her community, where they could all comfort each other and share a pot of hot soup.

All martial arts in Japan were shut down during the U.S. occupation. Later, Kodokan was reopened and judo saw a revitalization. It became especially popular with American soldiers in Japan, who brought it back to the United States. But it was impossible for Fukuda to support herself teaching judo. A woman judo instructor was paid the equivalent of train fare.

In 1956, she accepted her first invitation to teach in the U.S. After also traveling to the Philippines and Australia, she accepted a teaching position at Mills College in Oakland. With the devastation of the war, Fukuda’s family had lost most of their assets. Her move to the U.S. gave her financial stability, and the opportunity to make a profound influence on the world.

Soon after moving to California, some of her judo students became aware of the injustice within the Kodokan’s judo rank system for women. Fukuda had been stuck at 5th dan (5th degree black belt) for 30 years. Kodokan had no higher rank available for women.

National Organization for Women organizer Shelley Fernandez, Fukuda’s lifelong friend since 1956, approached Kodokan and petitioned that Fukuda be promoted. After several years they finally gave her 6th dan; they promoted her to 7th dan 10 years later, then to 8th dan 20 years later.

This was front-page news both in the U.S. and in Japan. The Kodokan judo organization had no more glass ceiling–Fukuda was judo’s first woman to be awarded 9th dan.

In 2002, Fukuda was recognized by the Japanese government as a “Living National Treasure.” This is a rare honor that is bestowed upon masters practicing traditional Japanese arts, including potters, musicians, sword makers, kimono artists, and actors. Fukuda is the only martial artist to be recognized with this honor. She is also the last living link to judo’s origin.

Fukuda returned to Japan for one last visit in October 2009. She had not been there in over 20 years and had given up on the possibility of traveling there. She was invited by Kodokan in Tokyo to be an honored guest at the annual All Japan Kata Tournament. Special arrangements were made with doctors and with Japan Airlines to accommodate her travel needs.

“We followed and filmed as she was recognized for her role in judo history,” says Romer. “We also filmed interviews with several Olympic medalists in judo, Fukuda Sensei’s visit to her homeland after 20-plus years of absence, a family reunion, and a visit to her grandfather’s grave to pay homage to her ancestral connection to judo.” 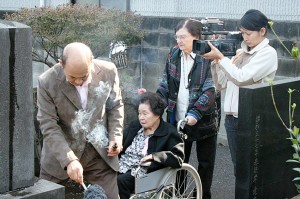 Romer added, “Keiko Fukuda’s spirit can light up a room. Despite her Parkinson’s, arthritis, triple bypass, and heart attack, she still teaches three times a week at her school, Soko Joshi Judo in San Francisco. She has many students around the world who eagerly share their stories of the triumph and courage that they attribute to the wisdom of their judo master.

“She still hosts both her annual women’s judo summer camp, and the annual Fukuda International Kata Tournament. She is keenly aware that her body is slowly failing, but her spirit is still strong.

“Every moment I spend with her, I am nurtured by Fukuda Sensei’s wisdom and love. I feel honored and lucky to be making this film.”

Romer founded Flying Carp in 1999. Her film “Occidental Encounters” aired on PBS and won a Student Academy Award, the Jimmy Stewart Memorial Crystal Heart Award, and the Silver Apple. She also directed, produced and edited “Dancing with God” and recently completed a short historical animation, “Friend Ships,” for a celebration of the 150th anniversary of U.S.-Japan relations.

Romer is a graduate of Stanford University’s master’s program in documentary filmmaking. Prior to that, she spent 10 years as an advertising art director and graphic designer. She has a BFA in art and design from UCLA. Her artistic interests go back to early childhood, when she first discovered painting, ceramics and sculpture.

“Be Strong, Be Gentle, Be Beautiful” will be broadcast both in the U.S. and Japan and has received support from the U.S. Judo Federation, the U.S.-Japan Foundation and the Marra Foundation as well as individual donors.

CLICK HERE: Mrs. Judo - "Be Strong, Be Gentle, Be Beautiful"

No info for Sensei Fukuda's services is available as of now. As soon as we get this info we will inform the judo community.

Comment by MichaelDavid Smith on February 10, 2013 at 11:56am
any information about funeral services