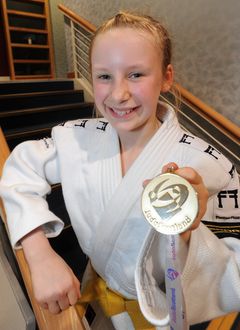 AN AIRDRIE judo ace has told of her joy at winning a gold medal in her first major competition.

The 10-year-old, who lives in Forrest Street, was in top form as she swept to success and left her rivals trailing in her wake.

Emma is a member of the Sportif Judo Club, with thrilled instructor Clare Buchanan labelling her triumph as a “fantastic achievement” for the group.

And the star attraction was bursting with pride as she re-lived her unlikely victory.

“I really enjoy my judo,” the Alexandra Primary School pupil told the Advertiser. “And it felt really good to become Scottish champion.

“I got involved in the sport after judo coaches came to our school and gave a demonstration as to what it was all about.

“My mum and dad, Isabel and Eddie, are really proud of what I’ve achieved but I know I’ve got to continue to work hard.

“It would be great to compete in the UK championships next year and win a medal there.”

Instructor Clare said she was living on her nerves as Emma moved through the competition and won the category for girls aged 10 and 11.

“Emma’s success is amazing for everyone at the club,” the 27-year-old revealed. “We’re all so happy for her.

“The club has been open for two years and we entered five kids just to give them the experience of taking part.

“But when Emma kept on winning her matches, I started to think that she had a real chance.

“She was quite nervous but she performed really well and was very consistent. I was biting my nails when she went into her final match with an opportunity of winning gold.

“This was Emma’s first major competition and we weren’t expecting anything like this.”

Clare hailed Emma’s dedication to the sport and says her success even caught the youngster’s parents by surprise.

She added: “Emma’s victory was well-deserved and is a fantastic achievement for the club.

“She trains twice a week and has worked so hard for her gold medal.”