Satoshi Ishii, the gold medalist in the men’s over-100 kilogram class at the Beijing Olympics, is planning a return to judo from mixed martial arts—but in the United States, Kyodo News learned on Tuesday.

The 24-year-old Ishii turned to MMA in December 2008 after winning the gold that summer in Beijing and finding national fame. He is currently based in Los Angeles.

Ishii has registered and been cleared to compete in the over-100 kg and the 100 kg categories at the April 29-30 national championships in Orlando, Florida.

It will be his first judo bout since the Beijing Olympic final.

He was scheduled to compete on the Strikeforce Challengers 15 show but the recent natural disasters in Japan prevented him from obtaining a visa in time.

His ultimate goal is to receive his United States citizenship and compete at the 2016 Olympics in Brazil. 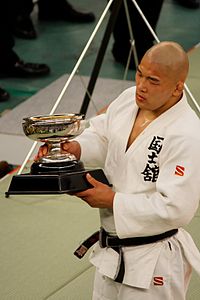