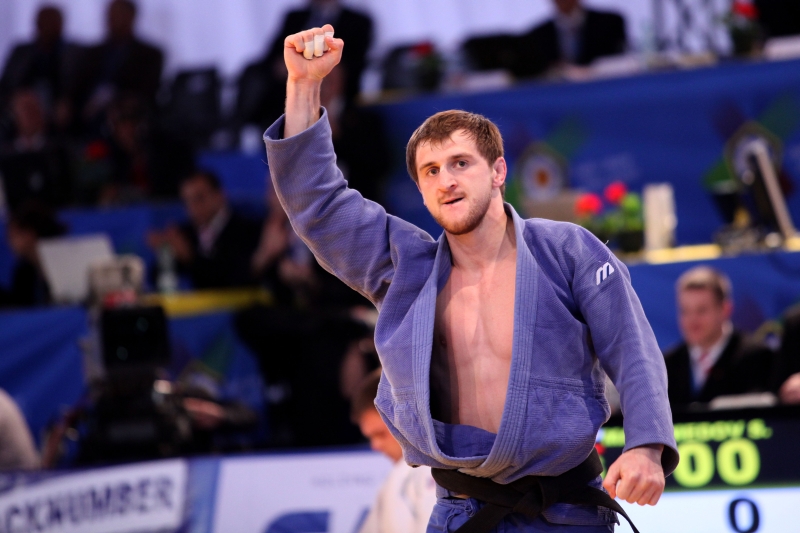 The Russian men were extremely strong today at the IJF Grand Prix in Qingdao. In the men’s U81kg, U90kg and U100 category the Russian took the gold. European Sirazhudin Magomedov defeated Chinese Li Maojian.
Magomedov was awarded as best male judoka. He really smashed Maojian in the final impressively.

Although the field wasn’t the strongest possible it’s characteristic that China have a man in the final. Tomislav Marijanovic won his second medal this year, earlier he won the Grand Slam of Rio, today he won bronze and also the second medal for Croatia this year in the major tournaments.
Another Russian success for Kirill Denisov who won U90kg defeating Kim Kwang-Ho who had his biggest ever success to reach the final. This usually strong category had a good European representation as European Champion Marcus Nyman won bronze as well as Italian Lorenzo Bagnoli.
Also we enjoyed the return of hugely talented Yves Matthieu Dafreville (FRA) to international competition after almost 18 months out through injury. He finished fifth after his loss to Denisov.
Sergey Samoylovich (RUS) defeated Temuulen Battulga (MGL) U100kg. Samoylovich led by waza-ari soon in the match and 50 seconds before the end Samoylovich scored another waza-ari and took the third Russian medal at this day.
Russia won 12 gold medals this year at Grand Prixs and Grand Slams this year, because of today, three more than last year. Eleven out of twelve were for male judoka.

Islam El-Shehaby from Egypt won his fourth gold medal at major events this year. In the plus category he didn’t have to fight and had a walkover against Daniel Andrey Hernandes (BRA) in the final, who was injured due to his previous match against his compatriot Silva.
El–Shehaby started his success this year with a gold medal at the GP of Düsseldorf and proceeded in May with the victory on home soil in Cairo. In July he won the Grand Slam of Moscow and won bronze at the World Championships. Followed by silver in Abu Dhabi and last week’s fifth place in Tokyo teased him to set a good results in Qingdao.
31-year old Hernandes got silver, his second medal this year after his silver at the Pan American Championships in San Salvador. He injured his arm in his fight against Silva but seems to be okay.

In the women’s division Linda Bolder (NED) won the gold U70kg in the golden score against Chinese Fei Chen. The Dutch challenger of Edith Bosch who won bronze last week in Tokyo, was able to score a yuko after a tactical match in Qingdao.
It was the fourth gold medal for The Netherlands in IJF Grand Prix or Grand Slams in 2010. Bolder who fought in many events this year ended 2010 in style. She had also won the GP of Cairo in May, the European Cup in Celje (SLO) and was essential for the Dutch team victory at the World Championships in Antalya. With her Bosch and Kim Polling The Netherlands have an excellent basis to compete with foreign competitors, but only one can compete at the 2012 London Olympics. Before that the three will compete for the two World Championships positions in Paris in August 2011.

In the women’s U78kg it was the expected favourite Yang to win the category. The Olympic Champion of 2008 defeated Tomomi Okamura in the final. Qingdao is decorated with trees in shop windows and colored flashing lights wishing people Happy Holidays can been seen on every street and the people have been especially warmed up for this judo star Yang Xiuli (CHN). In the semi final she defeated Dutch former World Champion Marhinde Verkerk by a devastating point, which was awarded as best point of the day.
Okamura who finished second at the World Cup in Suwon as well competed at the World Championships this year but ended up 17th while she is the Japanese Champion, a title won in April. Earlier in Suwon at the IJF Masters Okamura defeated the Olympic Champion in the quarter final. But today Yang hit Okamura with a beautiful combination for an ippon and gave the crowd where they were waiting for.

In the women’s heavyweight final quite a surprise unveiled in the last seconds of the match. Yu Song fought the tall Huanyuan and made one of the best points of today with a great o-uchi-gari by Yu twelve seconds before the end. What a firework that was from Yu who had also won the World Cup in Suwon two weeks ago.