Ronda Rousey smiles during her weigh-in in Columbus, Ohio March 2, 2012. A judo bronze medallist at the 2008 Olympics, Rousey became the new face of women's MMA after ripping the bantamweight title from Miesha Tate's grasp in March. Picture taken March 2, 2012. 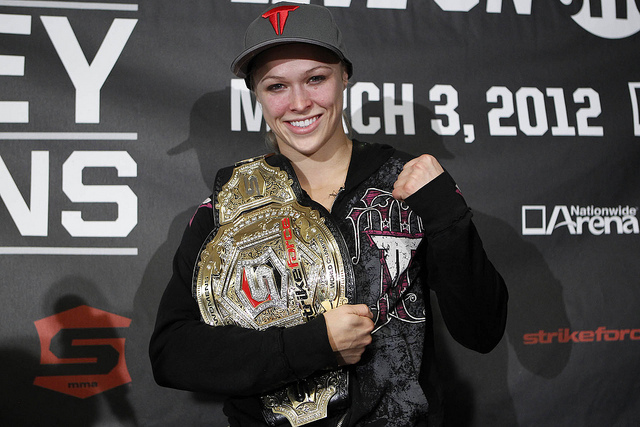 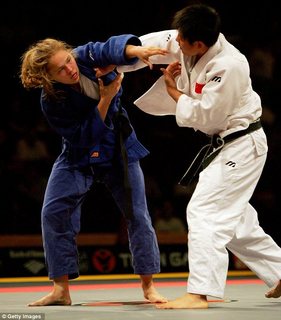 "This girl is nasty," White told "The Jim Rome Show."

"She might be beautiful on the outside but she's a Diaz brother on the inside." he added, referring to the prickly Nick and Nate Diaz. "She's a real fighter and she's very talented."

Rousey (6-0) has won all of her MMA fights in the first round via armbar. She is coming off an August win over Victoria's Sarah Kaufman and previously beat Julia (The Jewel) Budd of Port Moody, B.C.

"Okay I admit it...I'm officially a @ufc fighter :) SO excited! Can't wait to debut! Let @danawhite know who you want my 1st opponent to be!," tweeted Rousey.

The 25-year-old California fighter has become something of a media darling of late, profiled in Sports Illustrated and featured on the cover of ESPN The Magazine's body issue.

Since dethroning champion Miesha Tate in March, Rousey has helped ring the bell to open the NASDAQ trading day and spoken to the New York and California state senates about her sport.

The five-foot-six 135-pounder has wasted little time making her name. Rousey's pro MMA career has lasted all of seven minutes 39 seconds in the cage

Only one of her fights has taken more than a minute. Tate lasted four minutes 27 seconds before tapping out.

Rousey made her name in Strikeforce, which is owned by the UFC. But the UFC reportedly plans to shut Strikeforce down and the signing of Rousey signals the start of a new era for women in the promotion.

The UFC has already showcased Rousey in a well-documented cameo as a guest coach on an episode of "The Ultimate Fighter'' reality TV show.

In the past, White has insisted there isn't enough depth to support women's MMA. But he says he does have a good selection of opponents for Rousey in the 135-pound division.

The other big name in women's fighting is Brazilian Cris (Cyborg) Santos, but the Strikeforce featherweight (145-pound) champion has trouble making Rousey's weight class and is currently serving a one-year drug suspension.

Former star fighter Gina Carano has moved on to a movie career.

Rousey comes from a distinguished judo background. Mother AnnMaria de Mars, in 1984, was the first American to win a world judo championship.

Ronda had her first judo tournament on her 11th birthday. At 17, she was the youngest judo competitor at the Athens Olympics despite tearing her anterior cruciate ligament in 2003. In 2008, she won a bronze medal in Beijing. She lost her quarter-final to a former world champion but reached the medal podium via the repechage. Her judo training has taken her to Montreal in the past.

"I absolutely loved it — it was one of my favourite time periods actually when I was training," she told The Canadian Press in a 2011 interview. "The only thing that kind of sucked was I didn't have a car and I was very dependent on public transportation. Waiting in a blizzard at a bus stop to go to a gym was not that cool.'' Rousey had planned to take a year off after Beijing. In the interim, she worked as a bartender and narrowed her career choices to being a rescue swimmer for the Coast Guard or MMA fighter.

Her first pro fight was a 25-second submission win over Ediane Gomes in March 2011.

The armbar is her mother's move, she said.

"It's kind of been drilled into my head ever since I was a little kid ... to the point that I don't even think about it. It just kind of comes naturally.''

"I tell people it's kind of like doing algebra. If you understand the concept of algebra, it's easy to solve any kind of equation. You don't have to practise doing one equation over and over and over again so you get good at solving that (one equation)."

Prior to signing with Strikeforce last year, Rousey was juggling three jobs while trying to train as a fledgling MMA fighter.

She worked overnights in a gym, taught judo during the day and worked as a canine physical therapy assistant. The jobs took a toll.

"I ended up driving back from a graveyard shift, I just fell asleep while driving and smashed my face into the steering wheel," Rousey told The Canadian Press earlier this year. "That's why I have a deviated septum, not from getting punched in the face, but from having my car run into my face." The ESPN magazine shoot showed a smiling Rousey with her hands — covered in pink wrap with the logo Built to Fight — in a punching stance with a tattoo of the Olympic rings just visible at the top of her thigh.

"I'm like a Monet," she told the magazine. "From far away, I can look like a prissy model, but when you come closer you see the wear and tear of a fighter. 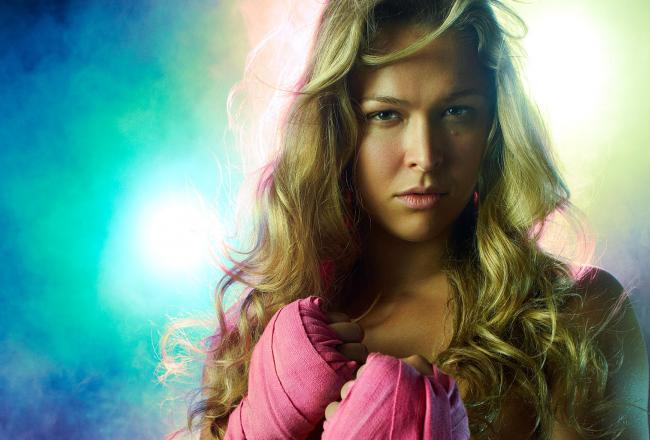 "Women don't have to trade their femininity for athleticism," she continued. "And you don't have to look like an anorexic eight-year-old to be considered beautiful. Skinny girls look good in clothes but fit chicks look good naked." 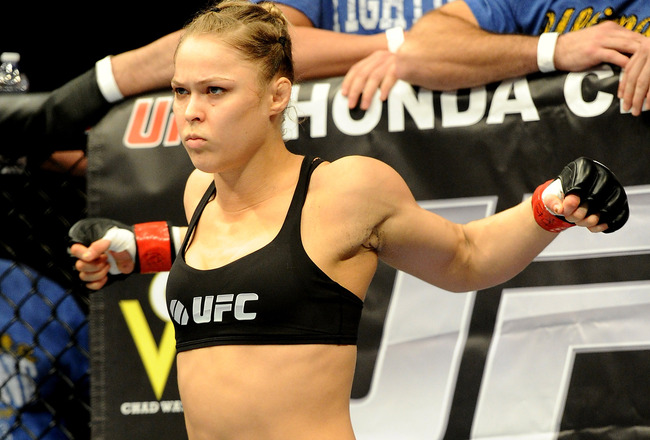