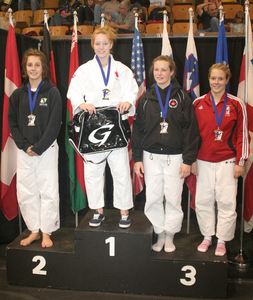 Brampton’s Nicole Jenicek earned two medals, including gold at the Quebec Open International Judo Tournament in Montreal.
The 18-year old claimed the gold medal in the under-20 division of her weight class, among a pool of 22 competitors. She dominated that division winning all four of her matches by ippon (pin), each lasting less than 30 seconds.
She won the final over Elodie Lavoie from Quebec. Earlier she topped Briana McCracken of Ontario. Jenicek also defeated Ariane Bouchard and Noemie Hottie, both from Quebec.
The next day Jenicek moved up to the tough senior division where she claimed the bronze medal, winning three matches with one loss. Her personal coach Ron Angus called it a great comeback for Jenicek who is battling back from injury..