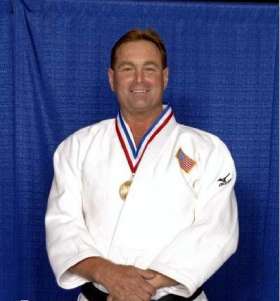 By My Clay Sun

The head instructor at an Orange Park judo club recently won the Masters Heavyweight Judo title at the 2010 Pan American Judo Championships, according to a news release.

Greg DiFranza of First Coast Kodokan Judo is also tactical enforcement coordinator at the Institute of Police Technology and Management at the University of North Florida and a retired Jacksonville
Sheriff's Office police officer.

At the two-day championships, DiFranza "won all of his matches by throwing his opponents with sufficient force to end the match and by submission pins," putting him at the top of the USA Judo National
Ranking Roster in his division, according to the release.

DiFranza was the only representative from North Florida among 300 competitors from North, Central and South America at the event, held at ESPN Wide World of Sports in Walt Disney World.

He also won the gold medal at the 2010 USA Judo Senior National Championships, and a gold medal last summer in judo for the grandmaster heavyweight division at the 2009 World Police and Fire Games in
Vancouver, B.C.

Judo, the first martial art to become an Olympic sport, involves throws, pins, chokes and armlocks, according to the release.