It was about six years ago when Olympian and SJSU graduate Marti Malloy arrived on campus with one clear objective — go to the Olympics.

“One of the first things I asked her was, ‘What’s your plan?’ and she said she wanted to make the Olympic team,” said SJSU judo head coach Yoshihiro Uchida. “She showed a lot of desire and hunger to become a champion.” Malloy's dream was realized this year as she competed at the Olympics in London and earned a bronze medal in the women’s judo 57 kilogram division, according to the official website of the London 2012 Olympic Games.

“It was the weirdest feeling in the world,” Malloy said. “Complete and pure happiness and also disbelief. Not necessarily disbelief because I didn’t think I could win, but because I (won the last match) so decisively.”

During the two years prior to the Olympics, Malloy said she had been competing in international tournaments trying to earn a spot on the U.S. Olympic team.

She said competitors earn points based on where they place in tournaments and the top 14 women are secured a place on their Olympic team.

Malloy said she earned enough points to be ranked No. 10 in the world going into the Olympics.

“It’s stressful because every tournament matters,” Malloy said. “You’re in a constant point race over those two years. For a lot of people, just getting qualified was an accomplishment itself because it was such a hard process.”

Malloy said her dream was realized when she earned a spot on the team after she took third place at the Paris Grand Slam in February, but then injured her shoulder during another competition a week after.

“I was out for six weeks,” Malloy said. “It was a really big high knowing you were going to the Olympics, but a big low thinking you weren’t going to be prepared.”

Malloy said she decided to not have surgery and instead did physical therapy every day for months leading up to the Olympics.

In her first match in London, she defeated Telma Monteiro of Portugal, whom at the time was the No. 2 seed, according to ESPN. 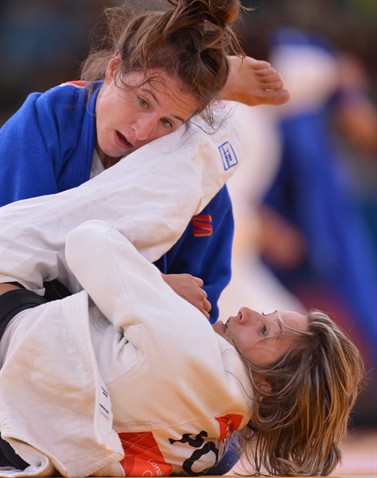 Malloy said the first victory was especially sweet because Monteiro defeated her twice before, both times in the first round of qualifying tournaments.

“I saw my draw for the Olympics and I was so mad,” Malloy said. “I was like I’m not going to let this girl be my first round match in every tournament and knock me out, especially the Olympics.” 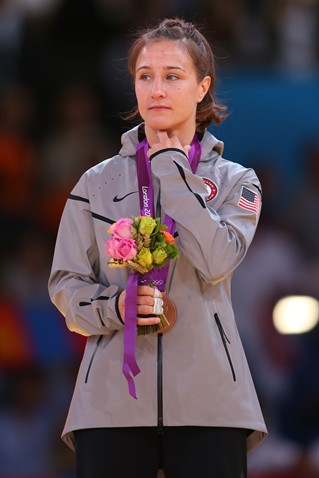 Listen: Medalist Marti Malloy reflects on losing to the same opponent twice in the same matter.

Malloy said she and her coach followed a game plan and it worked.

“I knew I could beat her. It was just a matter of when,” Malloy said. “I just beat the world’s No. 2. I know I’m capable of beating anyone in this division.”

Malloy won two more matches before losing in the semifinals to Corina Caprioriu of Romania, preventing her from competing in the gold medal match, according to the official London 2012 Olympic Games. 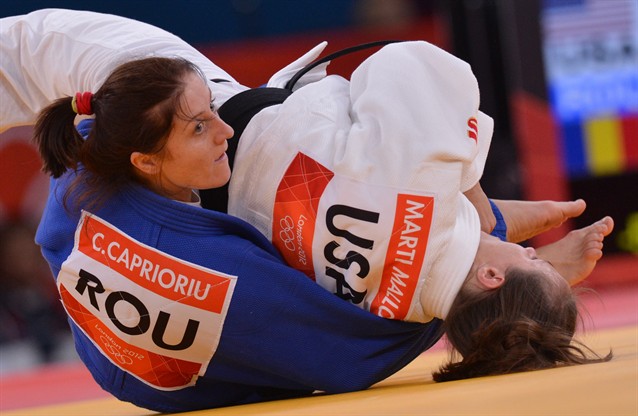 Malloy said she prides herself in being a good sport whether in victory or defeat, but after her only loss in London, she let her emotions get the best of her and threw a water bottle at a bar.

“After the semifinals, I saw red,” she said. “As soon as I hit it, I regretted it. I don’t like to get out of control like that.”

After her loss, Malloy said she had to forget about it quickly and prepare for the bronze medal match, though it was very difficult.

Malloy’s father, Marty, said he was in the crowd in London and watched on.

“Seeing her recover from that (loss), focus and recognize the job at hand epitomizes the kind of woman she is,” Marty said.

Malloy won her next match, defeating Giulia Quintavalle of Italy to earn the bronze medal, according to the Olympic website.

Malloy’s mother, Merry, said she was also in London and to see her daughter win bronze was “exhilarating.”

“It was what she was working for, for so long,” Merry said in a phone interview. “After they won, they swept her away. We didn’t see her until later that night.”

SJSU judo coach Jose Bencosme said he and the judo team were at his house and stayed up late to watch Malloy compete.

“We all stayed up from one o’clock in the morning until eight,” Bencosme said. “We stayed up because we knew she was going to do well.”

Junior kinesiology major Corwin Learned, who is actually enrolled at San Jose City College but trains with the judo club, said he was also at Bencosme’s house to cheer on Malloy late into the night.

“The feeling we all shared right there can’t be set into words,” Learned said. “She did almost as perfect as you can do. And for us to all be together and see it was awesome.”

Malloy said she has been bombarded with the media in London when she won her medal.

She said even when she returned to San Jose, she hasn’t had much time to rest.

“(I was) whisked from one place to the next — media, interviews and photos,” Malloy said. “I thought when I got back to San Jose it was going to die down a little, but I still haven’t got a chance to breath yet. But it’s fun.”

However, Malloy said her dream of being an Olympian began much earlier.

She said interest in judo sparked when she was six years old while her family lived in a naval air base in Washington.

“My dad enrolled my two older brothers in a judo class the base was offering,” Malloy said. “It looks super fun when you’re a kid. You’re throwing each other around, rolling and playing with your friends.”

Malloy said she competed in her first judo tournament within a few months — and won easily.

Her father said she competed in local tournaments and “can’t remember a time when she wasn’t exceptional.” “At six, she showed the discipline and aptitude,” Marty said. “Some matches only lasted a few seconds. She got right in there and stomped them.”

Bencosme said Malloy’s winning ways stayed with her while she was in high school.

“She had won a couple of international competitions at age 16,” Bencosme said. “Everybody knew about Marti in high school.”

After she graduated from high school in 2004, Malloy originally planned to go to an Olympic training center in Colorado but wanted to get a degree.

She said she visited SJSU for six weeks and from then made the decision to move to San Jose.

“I loved it so much that I went home for Christmas, packed up my stuff and moved here,” Malloy said.

Malloy’s father said he and the family were supportive of her moving to San Jose.

“She’s able to attend college and compete. It was a good combination,” Marty said. “To go to San Jose State and work with Uchida and some of the best in the world was a great opportunity for her.”

Malloy said when she first met Uchida, he made it very clear that she must maintain good grades to train and compete with the SJSU judo team.

“If you have bad grades or failing, it is not acceptable to come to judo (practice) instead,” Malloy said. “For me, it’s not acceptable to miss judo. I became a really good student because I didn’t want to risk missing judo for school. School always came first.”

Malloy said before graduating in 2010 as an advertising major, she was a four-time collegiate national champion, an SJSU Club Sports player of the year and was captain of the judo team for four years.

Malloy is now an assistant coach for the university’s judo team and trains with the SJSU judo club.

Bencosme said one competes for the university’s team when he or she is enrolled as a student and then can compete for the SJSU judo club after they’ve graduated.

Junior kinesiology major and judo team member Anthony Kwon said Malloy has always been a good influence on the team.

“It’s obvious Marti’s at an elite level,” Kwon said. “She’s a great role model, captain and leader. She sets the example for all of us.”

Learned said he’s been Malloy’s training partner for at least three years and that training with her has helped him be successful.

Learned said he earned third place at nationals, and after training with Malloy as she prepared for an international competition before the Olympics, he took first place this year.

“As she takes those steps, I see myself taking the same steps,” Learned said. “It helps me so much and I’m grateful to be a part of it.”

Malloy said her next goals are to compete in the world championships next year and in the next Summer Olympics where she has sights seton gold.

“For me, gold was realistic (in London),” Malloy said. “If anything, this bronze medal made me anything but complacent because I know I’m capable of more.”

She said although she is very happy that she earned a bronze medal, she is not satisfied and knowing that she could have won gold keeps her motivated.

Bencosme said Malloy is a good ambassador for the sport of judo.

“She’s been a winner the whole time, but she’s always been humble and kept herself down to earth.” Bencosme said. “She’s well spoken and educated and carries herself well. She welcomes everybody with open arms.”

Uchida agrees that Malloy can do much more for judo other than performing well in competitions.

“She is going to be a great leader, for not only American judo, but for women in general,” Uchida said. “She now feels the responsibility to give back to judo and has taken it upon herself. She wants to help people.” 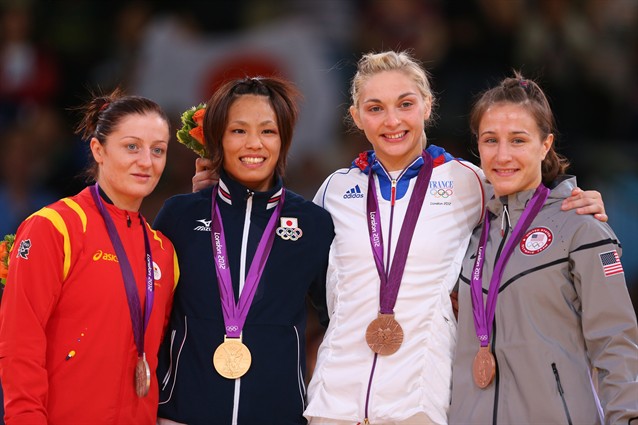