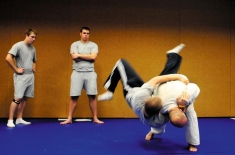 Renae Thomas and Samantha Atwood are having way too much fun for a martial arts class.

Thomas, 40, of Logan, and Atwood, 20, of Athens, are police science students at Hocking College. On this Thursday evening, they're paired off in a small practice room in Hocking's student center, working on a move they've just been shown by Fritz Goss, their instructor in a class on self-defense for police officers.

Thomas and Atwood are trying what Goss calls, with homely precision, the "getting-a-big-guy-off-you" technique. The move, he has explained, is to be used if "I end up flat on my back, and I've got a big thug on top of me."

As the women take turns flipping and slamming each other into a thick blue practice mat, they keep dissolving into gasps of laughter.

"You two are always giggling!" one of their male classmates accuses them.

"You can giggle all you want, girls," Goss assures them. "We want you to have fun."

"Like, how do I finish it?" Atwood asks Goss, having successfully pinned Thomas on her back.

"Just give me a kiss!" Thomas suggests, and they bust out laughing again.

The women are among about a dozen Hocking College students enrolled in the new class. Luring Goss, a resident of Columbus, to the college to teach the course was something of a coup; at age 63, he holds a sixth-degree black belt in judo, has won multiple Ohio AAU Judo State Championships dating back to 1968, won the 1987 National Judo Master's Championship, and during his time as an officer in the U.S. Navy, taught judo to Seal Team One in California.

He's also a born teacher - a job, coincidentally, that he held in a Columbus school system for many years before retiring. As he strides about the room, demonstrating throws and holds, he's constantly joking and telling stories in a mild drawl that makes him sound almost like a native of southeast Ohio.

His teaching style is free of both kick-your-ass swagger and pseudo-Asian "take the pebble from my hand, grasshopper" solemnity. At one point, he asks the students if they have any questions about martial arts.

"Does it get all the ladies?" asks one male student.

"I'll tell you what - I have rescued ladies," replies Goss - and launches into an anecdote about how he once subdued a man who had punched a woman at a New Year's Eve party.

"I beat him all the way down the sidewalk, on general principles," he recounts, grinning. In another instance, he recalls, during a workout run through the streets of Columbus, he chased down and apprehended a flasher who had been exposing himself to a woman and her children.

"I thought I was Dirty Harry," he admits. "It was fun, getting to be the right hand of the law."

The class is clearly made up of beginners in the martial arts, and it's broadly pragmatic in its approach.

Goss teaches a variety of simple judo- and jujitsu-derived moves meant to quickly defuse attacks a police officer is likely to run into on the street. He stresses that for a cop, the aim is to control and overpower violent offenders without hurting them more than necessary.

"This is self-defense against an idiot who is stupid enough to climb your back with a strangle," he explains before demonstrating an over-the-shoulder throw and takedown, complete with an arm-lock as the clincher.

"I love arm-locks," Goss admits. "The average guy on the street is unaware of how to defend against an arm-lock."

He tries the move out on a student volunteer, then sets the class to practice on their partners - with varying levels of skill. The room soon resounds with the thudding impacts of bodies slammed, some rather clumsily, into the top-of-the-line, deluxe padding that covers the floor.

WHILE THE STUDENTS PRACTICED, Goss explained to a reporter the aim of the class.

"It's how to deal with physical altercations that can occur, and control criminals in uncomfortable situations," he said. "It's 100 percent practical." He confirmed that part of the idea is to help officers use appropriate force levels.

"For a police officer, you don't want to be punching people too much," he added.

Calvin Price, dean of Hocking College's Public Safety program, said Sunday that the new class was created to provide "more methods, and better methods, to help police officers when they're on the street."

He said Goss was definitely a catch, both for his martial-arts expertise and his teaching skills.

"He has been a joy to work with - very responsive and helpful to us," he said. "And the students are really enjoying the class and learning a lot."

Some in the Thursday evening class readily agreed.

"I love it," said Thomas. "It hurts, but I like it a lot, I really do... We've learned a lot." Of Goss, she said, "He's a ball! He's a great teacher, and I think he really tries to make sure everybody understands everything."

Brian Follrod, 20, already works in law enforcement, as a reserve deputy for the Athens County Sheriff's Office. He's also a wrestler, who coaches the sport for a local school district; he said he's taking the course to pick up "more skills, and things I can use on the street." He said one of the most valuable things he's been learning is the importance of constant awareness as an aspect of self-defense.

Atwood says she hopes to land a spot with the Ohio University Police after she graduates. She said she, too, is learning a great deal from the class.

"I think it is really helpful," she said - especially for someone with no practical "martial arts" background. "In high school, I didn't get in any fights at all," she explained. She said she especially appreciates Goss's practical approach.

"He teaches the techniques that you need to use," she said.