MONGOLIAN JUDO - From Tradition to Modernity... Judo has now become a king of sports in Mongolia... 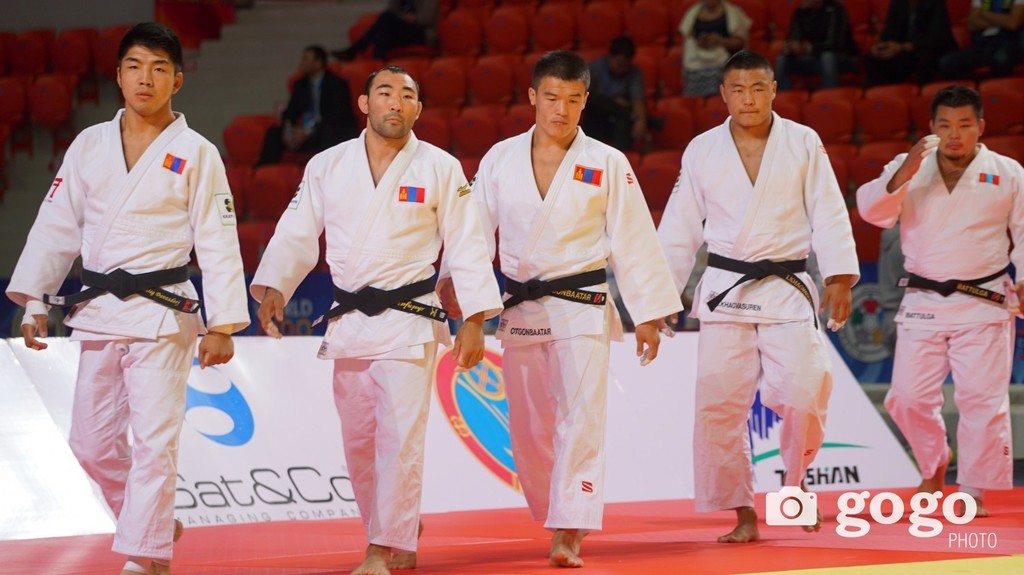 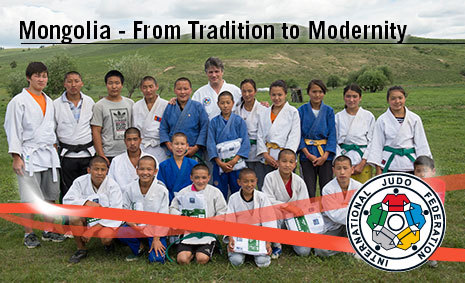 In July 2013, for the first time in history, an IJF Judo Grand Prix was held in Ulaanbaatar, Mongolia. By integrating the World Judo Tour, this event gave its credentials to a country which has already proven its capability in judo.

Regularly present on the international podiums, Mongolia does not need to demonstrate that it is a strong judo country. As is now regularly the case (China, Azerbaijan, USA), the IJF, in cooperation with the Mongolian Judo Federation (MJA), took advantage of the Grand Prix, to launch an educational programme. Thus during one week, IJF and MJA representatives travelled through the country to meet the Mongolian judoka.

Beyond the sporting dimension of these activities, it is the human dimension more than anything else that was important.

First Mongolian Heroes
Without any doubt, judo has now become a king of sports in Mongolia. If the traditional wrestling has and will continue to have a special place in the heart of the Mongols - to be convinced just attend a traditional Naadam festival - the Olympic title brilliantly obtained by Naidangiin Tuvshinbayar in the -100kg weight category in Beijing 2008 put judo in a special position.
"Judo is now widely recognized in our country," said the President of the Federation and Minister of Agriculture and Industry, Mr. Khaltmaa Battulga, before adding: "It is important for us to maintain this status. For that we know that we need to develop a strong educational program which will be based on the youth.
With the strong support of the IJF to organize the Grand Prix, as well as to build a powerful development program, we will be able to instill within the youth the judo values. We believe that it will be ​​useful for our society, which still oscillates between modernity and the traditional culture of nomadism that is so important to us.
"Our champions have all become role models for all the Mongols" 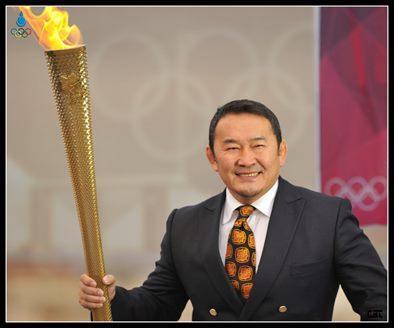 If Naidangiin Tuvshinbayar is a national hero, he is however not the first Mongolian judoka who has shown at the highest level (World Championships, Asian Games and/or Olympic Games). Several hours off road from Ulaanbaatar, in a small town called Erdenet (120 000 inhabitants), the IJF representatives, accompanied by the
Secretary General of the Mongolian Federation, Mr. BUKHBAT Mashbat, were able to meet Dorjpalamyn Narmandakh (-60kg), who was the first gold medallist at the Asian Games in Ho Chi Minh City in 1996. The same year, he won a superb bronze medal on the occasion of the Summer Olympics in Atlanta. At that time, it was the only medal for the Mongolian delegation.
"I started judo at the age of 11," recalled Narmandakh, "after discovering a Japanese movie. With all my friends we started to practice judo, but the conditions were difficult and I was the only one who continued. I attended my first international tournament in Lyon, France. It was a great adventure for me. I remember that what I liked the most was simply having a judogi on my shoulders. I felt really strong with it."
To the question, what does judo represent to you, Narmandakh bluntly responded: "It is an art and it is good for children. Judo has filled my life with happiness. I learned everything from my judo career.  After my medal at the Asian Games and in Atlanta, I even met my wife and I could find an apartment", he added with a smile. Without a doubt, to become 'famous' allowed him to climb the social ladder. His difficult living conditions have improved because of his results. He was suddenly recognized and still is today. After he stopped competing, he became national coach (Beijing 2008) and responsible for the juniors: "Now I still practice, mostly with children. I try to convey to them my passion for judo. At home, I have four boys. Three of them practice judo. Only the youngest does not yet, but he is only six months old. I asked to my oldest child to try judo, and the other two naturally followed him and they all love it.
What do I say to all young people that I meet on the tatami? The most important thing is the technique and especially good technique. In judo, it takes discipline, respect for the opponent and we must respect all the generations. When I was young, my idol was Battulga Sensei, the head coach for the men's team, who was an extraordinary competitor. I had tremendous respect for him." 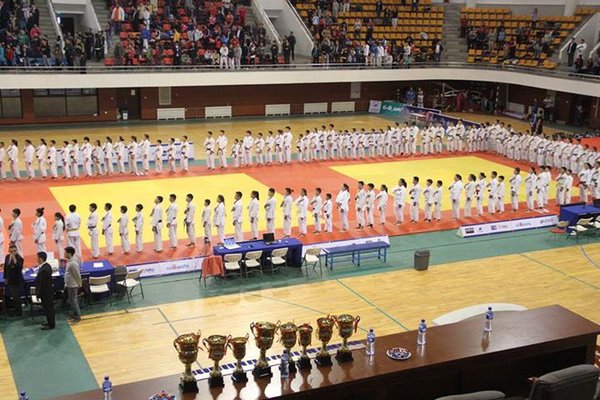 Respect is the Core Value
This true respect is still palpable: "especially of a feeling or atmosphere, clear to the mind or plain to see". During the meeting with Dorjpalamyn Narmandakh, Dashgombyn Battulga accompanied the IJF and MJA delegation. Bronze medallist at the World Championships in Belgrade 1989, the 48 year-old sensei is still recognized when he walks through the streets and is congratulated for his results and commitment to the youth.
For him if there is a secret of Mongolian judo, it might be found at the bottom of a Mongolian Ger:
.
Gers: A Traditional Home 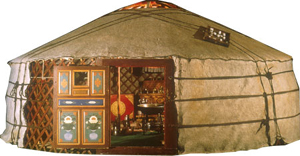 "The secret of Mongolian judo relies on the hard living conditions of Mongolian people. The younger generations now mostly live in the cities and it is more and more difficult to motivate them. Narmandakh, at a young age, had to help his family in its daily work. This made him stronger. But what is also very important, and that is something we are now focusing on, is the pleasure to practice judo. Young children must find pleasure in doing judo. Then the rest naturally comes." 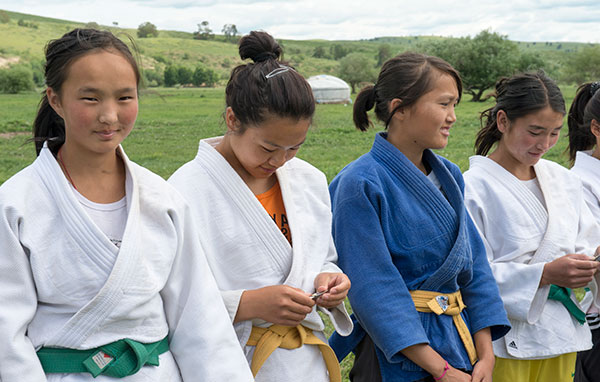 BUKHBAT Mashbat, the Secretary General of the Federation, also emphasized this dimension: "In Mongolia we have a strong tradition of wrestling. It is important for the judo development because bridges exists between judo and our traditional wrestling, like the balance, the standing position, the force. But today, thanks to our President, Khaltmaa Battulga, our federation put particular emphasis on the practice of the young generations and on the values ​​brought by our sport, judo. With the help of the International Judo Federation, we are working to establish a Judo for Children program. Our future depends on projects like this." 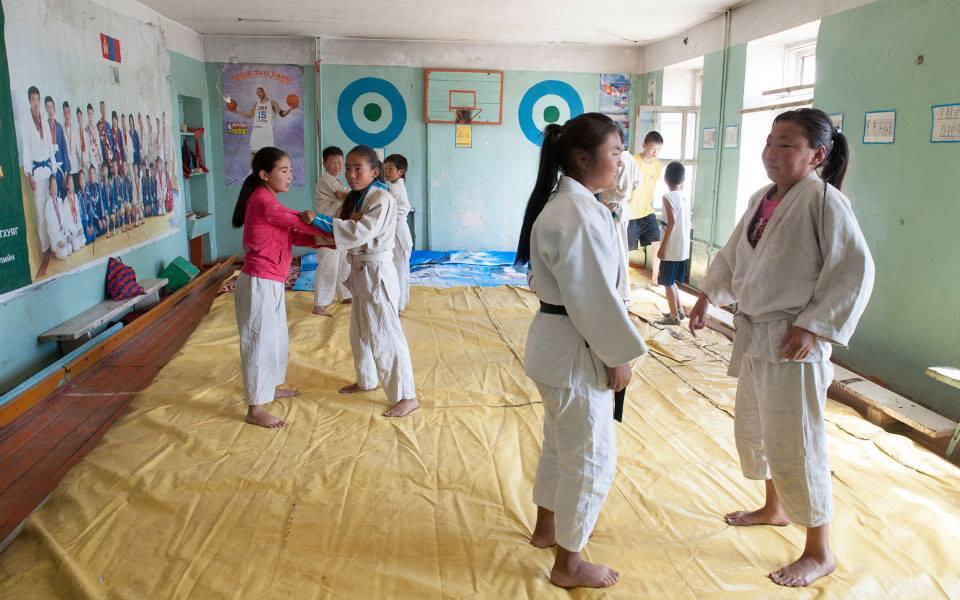 The development of women's practice is also an important development area for the Mongolian Judo Association: "After the Beijing Olympics in 2008 and the gold medal of Naidangiin Tuvshinbayar, all boys and girls in the country wanted to become Olympic champions. Our women's team is getting better and better and that attracts even more girls to judo", continued the General Secretary.
The Spirit of Tradition After this first important meeting with Dorjpalamyn Narmandakh, the delegation literally penetrated into the countryside to discover more about Mongolian Judo. After hours of road chaos, in a middle of beautiful and outstanding landscapes, the reward was at the end of the track, when after the thousandth turn, in the middle of a field surrounded by traditional gers (Mongolian tents) and livestock, a group of young judoka began to emerge. Far from any major urban center, 30 judoka were training, having clearly in mind the words of Narmandakh: "The technique, the beautiful technique, the art", and this whatever the training conditions were. It was an opportunity for Nicolas Messner, representing the IJF to host a judo clinic and deliver Green Hill judo-gi to the children (IJF master supplier) as part of the IJF donation to Mongolia, granted by the IJF President Mr. Marius Vizer. 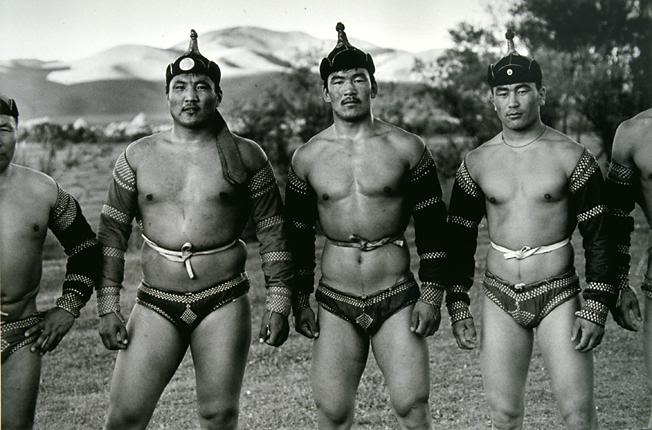 Traditional Mongolian Wrestling
A day's drive later, the delegation stopped in the small city of Rashant, to discover the spirit of traditional wrestling, which obviously has much to share with judo, both technically and philosophically, many wrestling champions being also distinguished judoka, and vice versa.

Judo has Penetrated the Society
Another significant step of the development plan initiated by the IJF with the strong support of the Mongolian Federation, was the visit of a judo club in the city of Moron, in the far north of the country. Once again, the living conditions are not easy 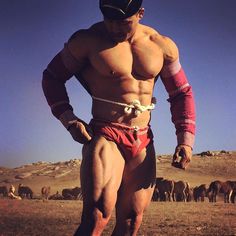 and the fairly mild summer climate should not hide the reality. The small classroom used as a dojo, in the 'School No. 1' is not expandable, the mats are sewn by hand, in winter the temperature drops consistently below -40°C. However, the weathered face of coach Davaadorj, which invests all his time and energy in the club, lighted a huge smile when he could present the work of his students (in total, there are three clubs in the city). Davaadorj trains daily 60 children and 30 adults: "My dream is one day to accompany one of my judo students at the Olympics. That would represent so much for all of us.". A judo demonstration and judogi donation later, smiling children returned home with full energy.
Perhaps the most extraordinary moment of the week of development activities was the meeting with the reindeer people, in the extreme north of the country. Representing 60 families for about 400 people in the whole world, yet they know the Mongolian judo champions, despite their extreme isolation and their living conditions. It is maybe within those images of this family living in a teepee, but knowing judo, where the secret of Mongolian judo might be found. The week concluded with the Moscow Judo Grand Slam images displayed on a small TV, on the lake banks of Lake Khovsgol: 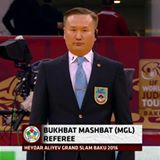 "Judo has got the power to penetrate the Mongolian society, and that is what we are working on", said BUKHBAT Mashbat.
Thanks to hard work of the Federation, and thanks to the results obtained by champions, who have become national heroes, in a context of strong traditional sports, judo plays a major role in Mongolia. Through development projects supported by the IJF, this will be further strengthened in the months and years to come. The presence of Mongolian athletes on the podium of the World Cadets Championships in Miami in early August, already announced the next generation of champions. Meanwhile, Judo for Children programs will allow a greater proportion of the youth to have access to the values ​​of judo. Today, judo Mongolia represents about 120 clubs for about 18,000 judoka. Mongolia: How the Sparsely Populated Land of Genghis Khan Succeed in Sports...

The reasons for its success in sports are simple. Mongolia is a country where one-third of citizens still roam the steppe and semi-desert as nomads. It’s a harsh life that develops muscle and fortitude. “When you get up at dawn to milk the camels or grab the cattle by their horns, it builds natural fitness,” said- “Mongolians: I think we’re tougher than anybody else.”


When their most famous native son is a 13th century conqueror who amassed the largest land empire in history, it’s not surprising that Mongolians have evolved into a rather sporty bunch. The land of Genghis Khan is populated today by fewer than 3 million people. 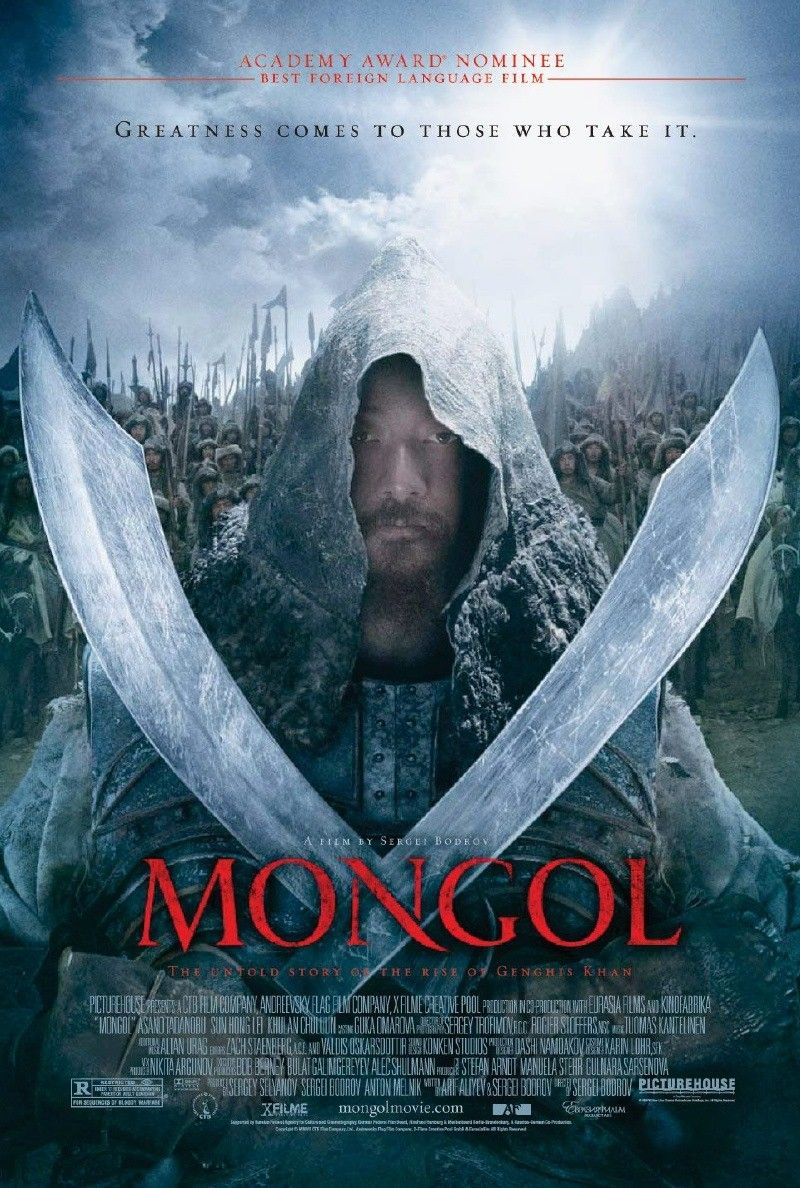 Filmed in the very lands that gave birth to Genghis Khan, ‘Mongol’ transports us back to a distant and exotic period in world history; to a nomad’s landscape of endless space, climatic extremes and ever-present danger.


‘Mongol’ was nominated for Oscar for best foreign language film of the year.

MONGOL: THE RISE OF GENGHIS KHAN