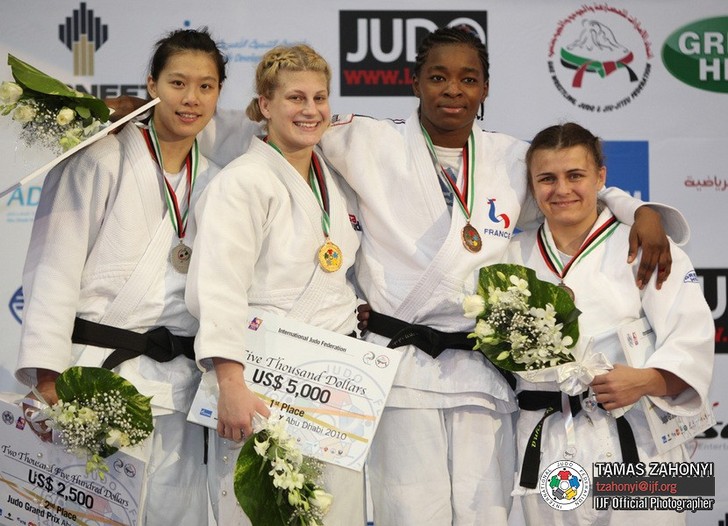 On Wednesday, Harrison won gold in the 78kg division at the Abu Dhabi Grand Prix. The win marked Harrison’s 10th medal on the World Tour circuit – more than any other player in the world this year.

“Kayla proved why she is the World Champion today,” said her coach Jimmy Pedro (Wakefield, Mass. / NYAC / USA Judo National Team FORCE). “This year has been a long, hard year for Kayla and we have been pushing her non-stop since Worlds using these events as training sessions to get better. Her ability to win gold here, despite not being in peak condition for the event, demonstrates that she can beat anyone when she sets her mind to it.”

Harrison had a first-round bye and armbarred Audrey Koumba (GAB) 40 seconds into the match to advance to the quarter-finals.

In the quarters, Harrison earned her third win against two-time World Cup medalist Daria Pogorzelec (POL) this year. Harrison took an early lead when she threw Pogorzelec for a yuko during the opening exchange. Midway through the match, Pogorzelec attacked Harrison with a te guruma (hand wheel throw), but Harrison countered with a throw for a waza-ari (half-point) score. Pogorzelec was ejected from the match, however, for grabbing Harrison’s leg during her throw attempt, giving Harrison the win.

In the semifinals, Harrison fought Audrey Tcheumeo (FRA) for the third time this year. After defeating Tcheumeo in the finals of the 2008 Junior Worlds, the Frenchwoman won their next two matches at the Rio de Janeiro Grand Slam in May and the Rotterdam Grand Prix in October.

With neither player able to score during the regulation period, the match went to Golden Score (overtime) where Harrison threw Tcheumeo for ippon with 40 seconds remaining in the match.

“Jimmy took me back to the drawing board and really helped me with the key adjustments that needed to be made, not only on the mat, but in my head. He let me know that this was going to be a battle and whoever wanted it more was gonna win it,” Harrison said. “He poked me in the chest and he said ‘It’s in here!’ and he was right. I wanted it and I knew as soon as I made up my mind I was gonna win, I would.”

Coach Pedro agreed that Harrison’s mindset was key to earning the win.

“Kayla mentally got up for her semifinal rematch against the Tcheumeo to prove she is the best in the weight class,” Coach Pedro said. “Although that match was a battle, the adjustments that Kayla made, and being disciplined throughout the match, led to her success.”

In the finals, Harrison fought Zhehui Zhang (CHN) – a player she had never fought or seen before, but who impressed the crowd with wins over 2009 World medalists Heide Wollert (GER) and Maryna Pryshchepa (UKR).

“Our strategy was really just to go out there and play my game. She had a great day. She seems like a young up-and-coming competitor and I had never seen her before,” Harrison said. “But I knew that if I played smart and to my strengths that she wasn’t going to beat me. She was strong right off the grip and I have a feeling I'll be seeing more of her in the next few years.”

Harrison scored early in the match with a combination throw for a yuko score and held on to the lead to win the match and the gold, returning to the top step of the World Tour podium for the sixth time this year.

“It feels great to win again. This year has been a long hard year and it’s been all about getting the experience and points towards that big goal – the Olympics – and seeing that I’ve medaled or won most of the tournaments I’ve entered into this year is a huge adrenaline rush. It’s good to know when I'm down and I’m tired and I’m sick of traveling and training that you can see that result and be able to say ‘hey, you know what? It’s working.”

Harrison will now take the next two weeks to train in Japan before her final event of the year – the Tokyo Grand Slam.

Harrison’s win marks the fourth top five finish for Team USA with only six athletes fighting in the event.

“During the past year, each of these athletes has come so far. Our goal has been to get these athletes as much competition experience as possible and that experience is definitely showing in their results,” said USA Judo Director of Athlete Performance Eddie Liddie (Colorado Springs, Colo.) “Kayla, Nick, Travis and Marti have all spent months on the road, but they’ve also worked just as hard every day back home and it’s great to see all of that work pay off.”

Also competing for Team USA on Wednesday, Billy Worthington (Richmond, Calif. / Cahill’s Judo) trailed Temuulen Battulga (MGL) by a yuko when the Mongolian took the match to the ground and Worthington was forced to tap out when his shoulder was injured.

Top five and U.S. results are as follows: