Dubbed "The Assassin" at the 2012 Olympics: Kaori Matsumoto is the 'BEAST' of Japan... 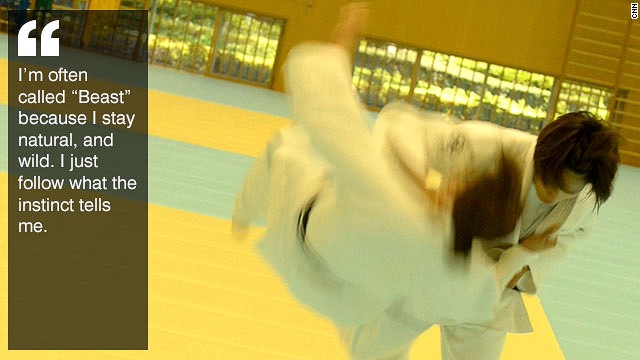 (CNN) -- She was dubbed "The Assassin" after winning gold at the London 2012 Olympics, but Kaori Matsumoto prefers to be known as "Beast."

Her coach, however, says she is more like Peter Pan -- and the judo star herself claims she once saw a fairy like Tinker Bell.

A self-confessed lover of junk food, Matsumoto is far from your average athlete -- and she is breaking new ground in a most traditional sport that was founded in her native Japan in the late 1800s. 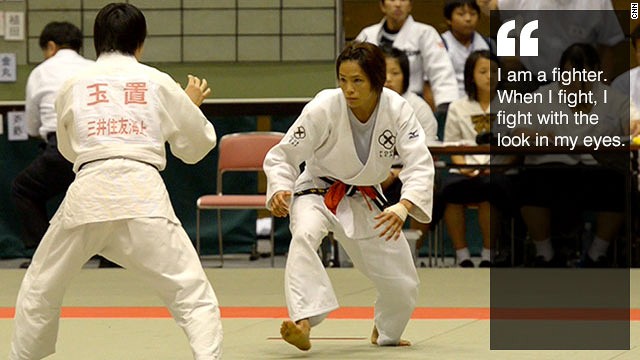 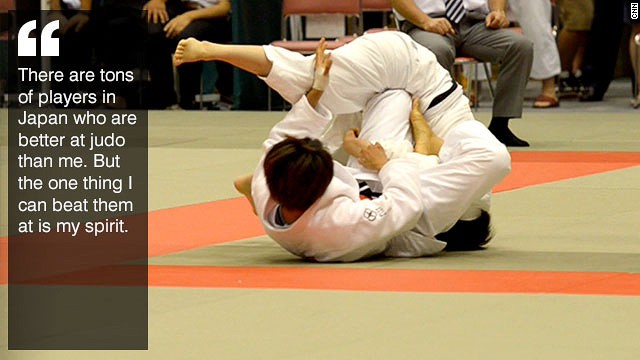 "So I think she has made a new history in the world of judo. And for kids who practice judo, they don't have to be pushed into certain stereotypes anymore now that they have Matsumoto who has broken those barriers."

Matsumoto, who turned 26 last month, earned her nickname not just for the ferocity of her fighting style, but also because of its unfettered natural instincts.

"There are tons of players in Japan who are better at judo than me, but the one thing that I can beat them at is my spirit," she says. 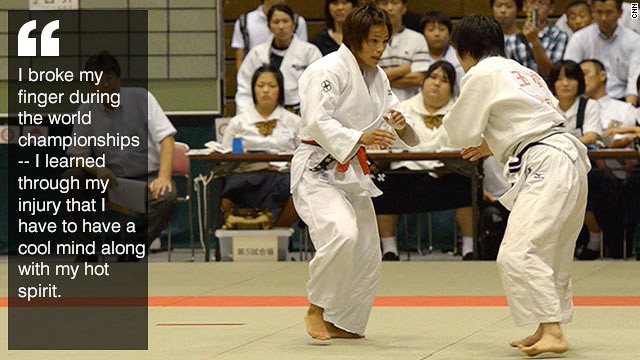 "I tend to go with just my spirit only, so my technique lags behind. My judo is sloppy compared to others'.

"I just go with the feel. I'm often called 'beast' because I stay natural, and wild, I think. I just follow what the instinct tells me. It's just like how people put up an umbrella when rain starts. I just naturally react to the flow of that situation." 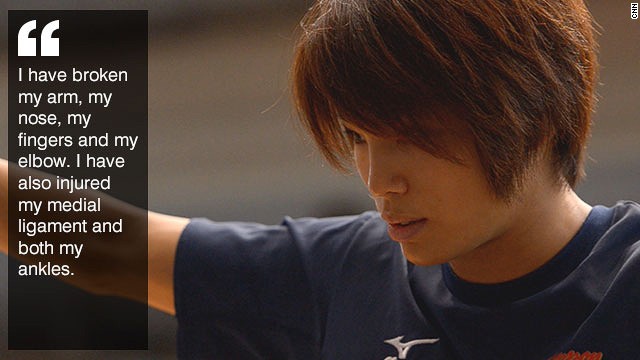 Japan has traditionally dominated judo since its first appearance at the 1964 Olympics in Tokyo, though it was not until 1992 that women were able to compete for medals.

"A judoka like her is unique in a female," Nakahashi says of Matsumoto, who at London 2012 became the first Japanese woman to win gold in the 57-kilogram class. 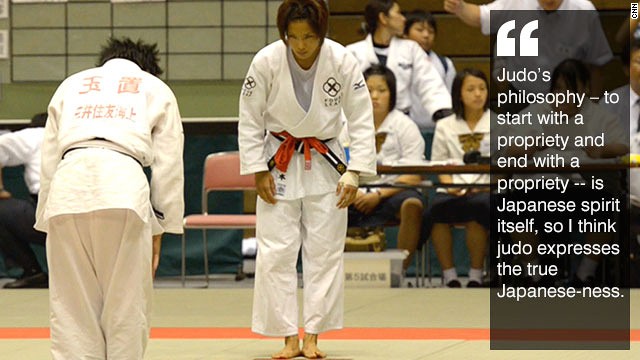 "She has a girlish side to her, but she is more like Peter Pan, with a heart of a young boy. She has something really pure about her."

Matsumoto is from Kanazawa, the coastal capital of Ishikawa Prefecture which is also bordered by the Japanese Alps. "I used to live where there were lots of bugs and forests and nature," she recalls. 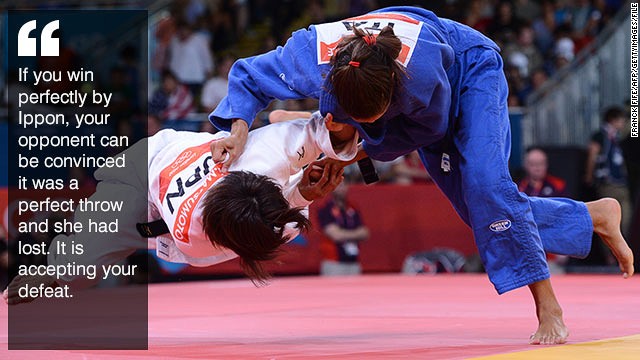 Having started judo at the age of six, by junior high school she was traveling the world as a national representative.

"My mother said, 'You're lucky you can go to so many different worlds.' So I promised her, 'I will take you there.'

"In the beginning it was that I just didn't like losing, but when I thought I want to take my parents to other countries for the matches, when the goals that were only mine started involving other people, I became stronger." 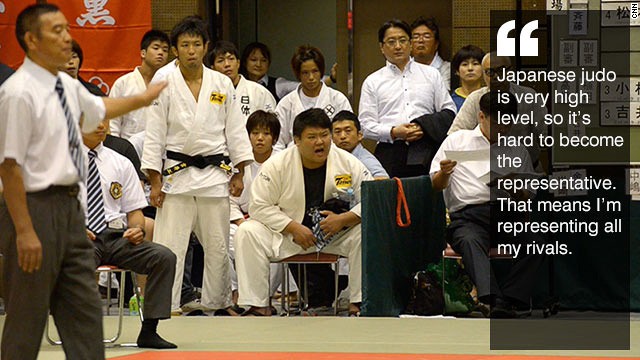 Nakahashi says Matsumoto's family "support her in a way that's invisible to the eye -- they support her soul."

And that attitude has helped her respect not only her teammates, but her rivals too. 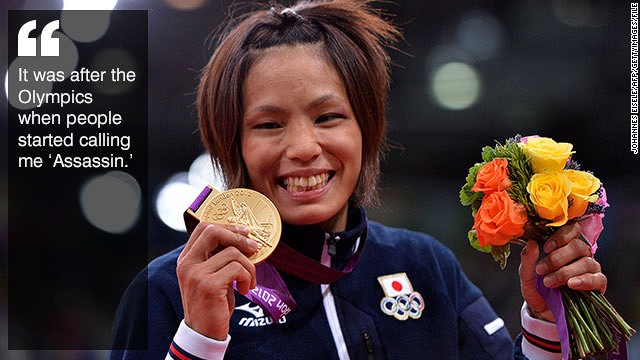 Matsumoto was not only Japan's first female victor in her weight category, she was also the only one of the judo team to win a title at London 2012 as well as her country's first of seven gold medalists at that Olympics. 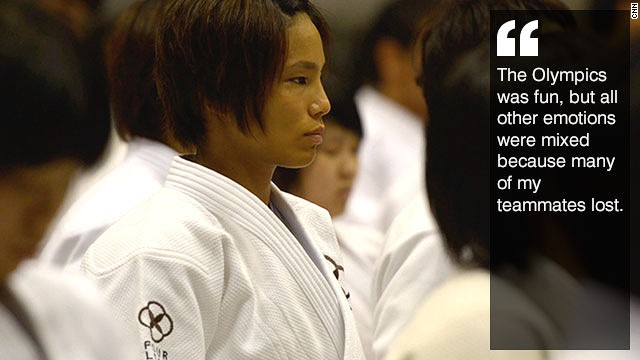 "It was fun, but all other emotions were mixed because many of my teammates lost," she says.

"It was something more than frustration. The two players who had lost their matches before me still came by to cheer me up. I was touched by how amazing they were, and then the feeling of respect to them was stronger than frustration (towards the losses).

"I fought my match holding the respect to them, thinking I would never forget their existence." 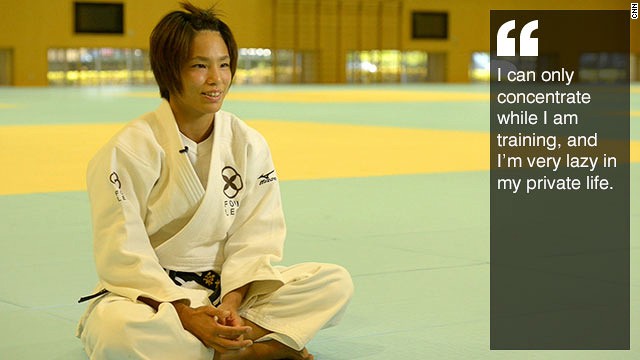 For Matsumoto, judo is a microcosm of what it means to be Japanese -- from the bow at the start of a fight, to the acknowledgement at the end.

While there are many ways of scoring points in the sport, the ultimate goal is to achieve "Ippon" -- a decisive move which ends a contest.

"If you win perfectly by Ippon, your opponent can be convinced that it was a perfect throw and she had lost. It is accepting your defeat. I think that's beautiful, because that's accepting yourself and your weakness." 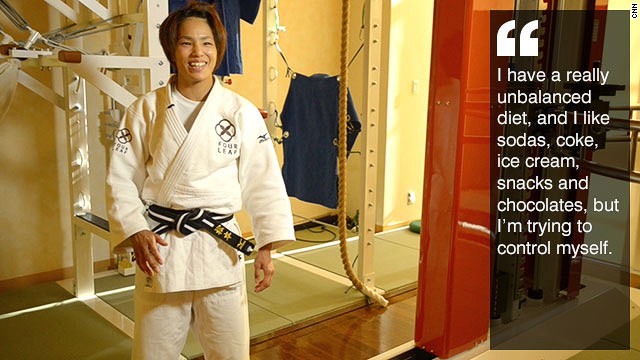 Matsumoto admits one of her weaknesses is her diet, which she is trying to change in order to stop a long series of injuries to most parts of her body ("My arm, my nose, my fingers, and my elbow ... also my medial ligament, both my ankles.")

"Recently I've been eating a lot of organic food and stuff like that. Organic vegetables are a little expensive, but what you eat comes back around to you," she says.

"I have a really unbalanced diet, and I like sodas, coke, ice cream, snacks and chocolates and everything like that, but I'm trying to stay away as much as possible. I'm trying to control myself."

Injuries are part of life as a judoka, and Matsumoto says they provide important lessons.

"I broke my finger during the world championships, but the message then was that I was doing a judo that just pressed forward without even looking at my opponent," explains the fighter, who went from fifth in the world in 2009 to champion the following year.

However, Matsumoto's mind is clearly a curious thing -- as evidenced by her admission that she believes she once saw a fairy.

"In Japan we have tea made out of barley, and we have it in this big bucket during training which everyone can drink out of. And one time from that bucket, a tiny person this size -- like Tinker Bell without the wings -- came out and flew away.

"But that was only that time and I haven't seen any since. It just simply strayed in and then left so that it won't be found by humans."

While Matsumoto is aiming to defend her title at Rio 2016, an appearance at her home Olympics in Tokyo four years later may be a less likely dream -- but not for younger generations of judo hopefuls.

"There are many children who don't have a dream in Japan. I didn't have a dream when I was in elementary school, so I painfully understand the anxiety to that," she says.

"But by watching sports together through the Olympic Games, we can share our dreams with the children. And the more children share those dreams, the more they will be able to have their own."

While Matsumoto didn't have any particular goal -- judo was so entrenched in her life from early on that she couldn't imagine doing anything else -- there was one recurring thought in her mind.

"I used to wonder what it would be like if every single person in the world smiles at once."

Smile, and the whole world smiles with you -- even if you're a "beast."