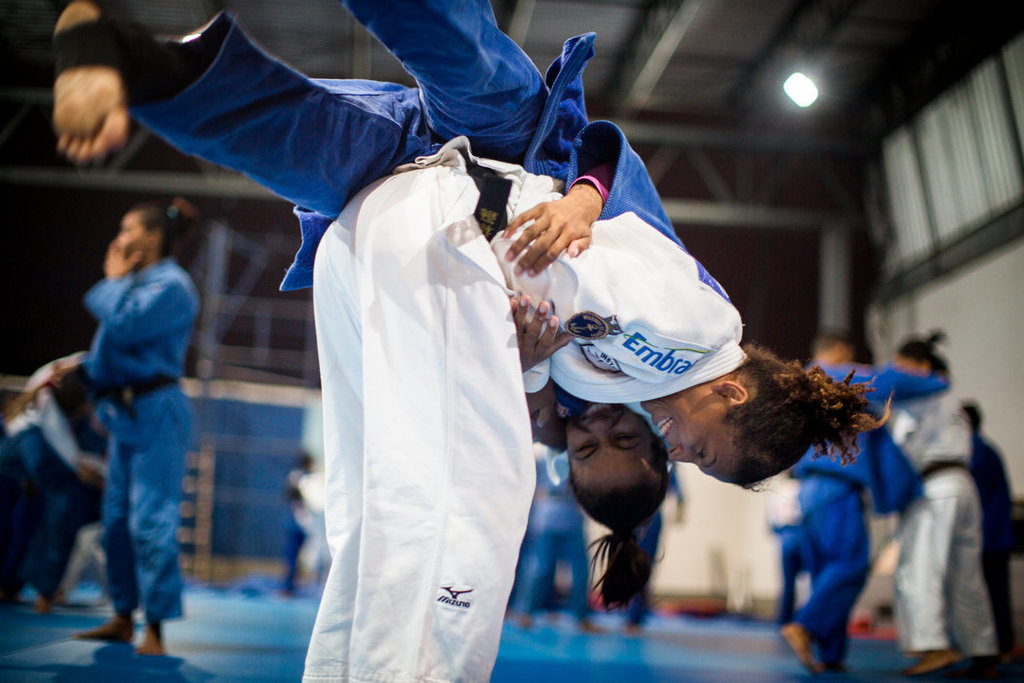 RIO DE JANEIRO — On a narrow, steep street about five miles from where the Olympic judo competition will take place in August, near a pile of unused bricks alongside Rua Agostinho Gama, 31 concrete steps hugged the outside of a building, rose and turned out of sight.

The stairs had no railing, and rebar stuck out several feet in a few places. Like so much of this dichotomous city, away from the beaches and into the hills and into the favelas, things seemed both under construction and crumbling.

A rooster in a cage sat at the landing at the top, and through the door where Rafaela Silva grew up and her family still lives, she shared a chair with her older sister, Raquel.

Few Brazilian athletes will be watched at the Rio Olympics as intensely as Rafaela Silva, the 2013 world champion in judo. Brazil has never won more than five gold medals at a single Olympics, but no sport — not sailing, not beach volleyball, not swimming or track and field — has produced more Brazilian medalists than judo. 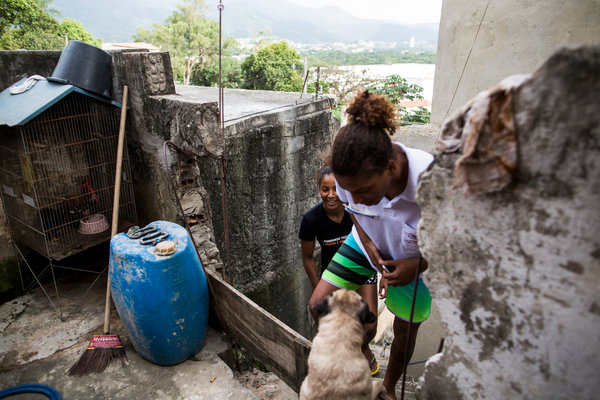 Silva, 23, is expected to add another.

“The only medal I don’t have is an Olympic medal,” she said. “To have a chance to win one in front of my family and friends is priceless.”

The floor of the home was cluttered with laundry — mostly judogis, the heavy canvas judo uniforms — and the walls were covered in judo awards. Raquel Silva, 26, is an international judo champion on Brazil’s national team, too, but she fell short of qualifying for the Olympics.

Down on the street, Rafaela and Raquel’s mother, Zenilda, stood in her small storefront, where she sells propane and an assortment of sundries, like soap and rice. Her daughters built strength by carrying propane tanks on their backs.

She came upstairs carrying food for the guests — a pair of poundcakes, loaves of bread and bottles of soda — and apologized for not having homemade treats. Luiz Carlos, her husband and the sisters’ father, was away at his job as a mover, but he would have baked a cake had the family known that company was coming, she said.

When the girls were in grade school, the family escaped neighboring Cidade de Deus (City of God), Rio’s most famously violent favela, to find a safer place. There is less fear of persistent danger here, just a mile away, mostly because the street dead-ends at the top of the hill. Thieves, gunslingers and drug dealers have only one escape route, so they go elsewhere.

The girls still found trouble, some of their own making.

“Here, if you don’t hit someone, you will be hit by someone,” Raquel said. “It’s survival.” 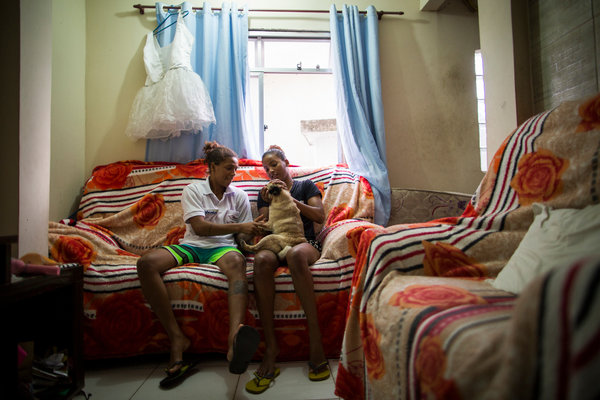 Rafaela and Raquel Silva in the home where they grew up and their family still lives. Their coach thought both of them could reach the national team as teenagers. Leslye Davis/The New York Times

Raquel was once expelled for fighting in school. Rafaela frequently fought the neighborhood boys in the street. Three years apart, they sometimes attended different schools.

“We would meet to walk home together, and I would come around the corner, and Rafaela was already in a fight,” Raquel said.

Their parents helped steer the girls through the temptations. A nearby judo gym was one way. It provided structure and diversion.

The inside of Rafaela Silva’s right biceps, hidden under her judogi during competitions, is tattooed with the Olympic rings and a note, in Portuguese: “God knows how much I’ve suffered and what I’ve done to get here.”

A bit earlier and a few miles away, Silva’s longtime coach, Geraldo Bernardes, described her journey from the slums to the Olympics. Bernardes, with silvery hair and blue eyes, is a former coach of Brazil’s national team. One former pupil is Flávio Canto, a two-time Olympian who won a bronze medal at the 2004 Athens Games and is now a celebrity in Brazil.

In 2003, Canto started Instituto Reação (Reaction Institute), a judo school for all ages and abilities, in Rocinha, Rio’s largest favela. He joined forces with Bernardes, who had his own gyms, including one in Cidade de Deus. They have expanded Instituto Reação into a program with five gyms and 1,250 athletes, including 130 in its “Olympic” program, which Bernardes oversees. (Among the benefactors are the American Ronda Rousey, a 2008 Olympic bronze medalist better known for her dominance of mixed martial arts, who recently donated money to the institute.)

More than a decade ago, Bernardes’s pupils included the young, feisty Silva sisters. He immediately saw potential in them. 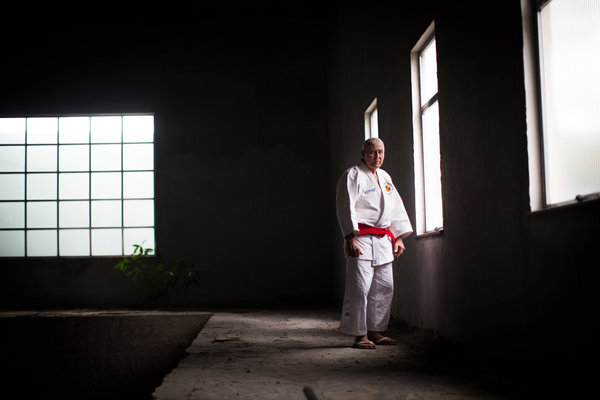 Geraldo Bernardes is a former coach of Brazil’s national team. More than a decade ago, his pupils included the Silva sisters. He immediately saw potential in them. Leslye Davis/The New York Times

“Rafaela was always really aggressive, but in a way that I could direct her in a way that was good for the sport,” he said at Estacio University, where he recently moved his gym to a large open-air pavilion with a metal roof and a padded floor. “She had a lot of energy and a lot of aggressiveness. I saw that her energy could be directed to the sport.”

He thought both of them could reach the national team as teenagers. They did. But Raquel became pregnant when she was 15, knocking her out of training for a couple of prime years. (Her daughter, now 10, was on the family’s couch during a recent visit.) Rafaela caught up to her sister and ultimately passed her.

“She could have been better than Rafaela,” Bernardes said. “But she also had knee surgery and was really delayed. Rafaela overcame her.”

Bernardes said that Rafaela Silva, who competes at the 57-kilogram weight class (about 126 pounds), had judo’s vital characteristics: coordination, balance, a long wingspan and a capacity to learn quickly. She was also left-handed, an advantage in judo the way it can be in other combat sports.

But she also had hunger, he said, even in a literal sense. She felt sick during her first training session with him, he recalled, because she had not eaten breakfast.

“Judo requires from the athlete a lot of sacrifice,” Bernardes said. “But in a poor community, they are used to sacrifice. They see a lot of violence; they may not have food. I could see when she was very young that she was aggressive. And because of where she is from, she wanted something better.”

Bernardes told the girls that he would not give them belt exams if they got into trouble at school or on the streets — enough of an incentive to keep them out of most trouble. He helped pay for the girls’ training, including travel to tournaments that the family could not afford.

“I did it at first because I liked it,” Raquel Silva said. “But Geraldo showed us another world. It was a job. It was a profession. That planted a seed.” 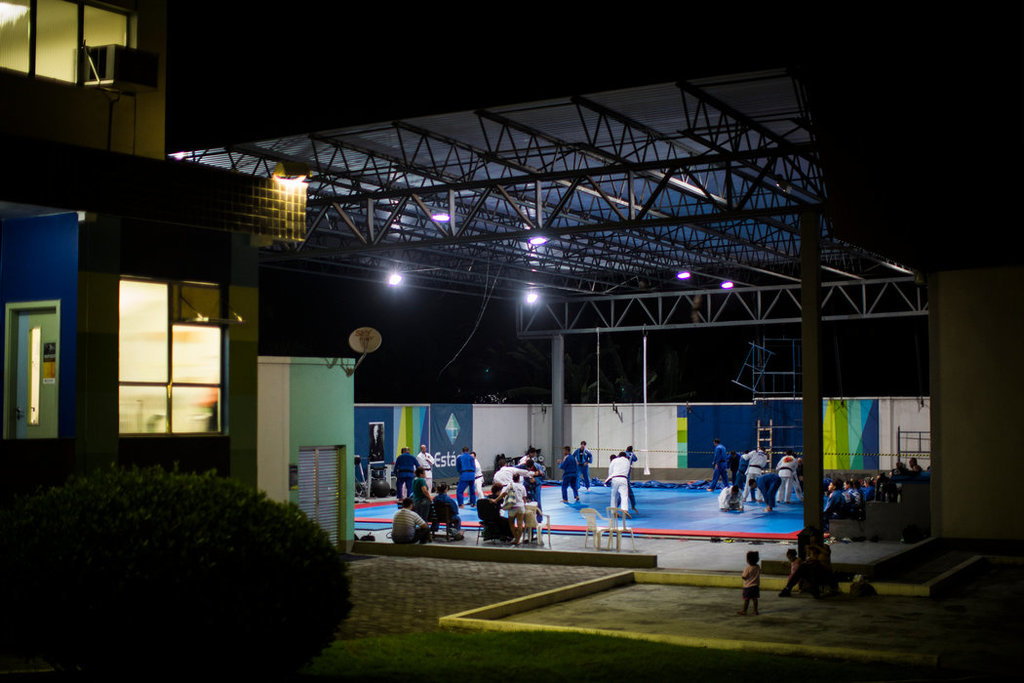 Silva’s gym is a large open-air pavilion with a metal roof and a padded floor. Leslye Davis/The New York Times

Rafaela did not take it as seriously. She still does not like to train. But she earned her black belt at 16 and became a junior world champion.

“Everything changed in 2008 at the world junior championship in Thailand,” she said. “That’s when I realized that this is what I want to do. All my life before then, all my fights were easy. They would last 10 seconds. And I could spend the rest of my time playing. But after the world championships, I realized things could be different.”

At 19, she won silver at the world championships. At 21, she won gold. But the tournament that haunts her was in between, at the 2012 London Olympics.

Then, as now, she was considered a serious medal contender. But Silva was disqualified during a preliminary match for an illegal hold, a technicality related to a recent rule change.

“The opponent was a girl from Hungary who I had beaten easily before,” Silva said. “I don’t know if I thought that I should just do this quickly, but the judge gave me one point, then changed it and disqualified me.”

“I trained four years for the Olympics, and now in a minute they were gone,” she said.

The immediate aftermath was worse. Some Brazilians on social media mocked her and called her racial epithets, one saying that “the place of a monkey is in a cage.” Silva could not resist responding, and did so with vitriolic name-calling of her own. The Twitter war attracted so much attention that the Brazil Olympic Committee stepped in to admonish the attacks, and judo officials persuaded Silva to stop replying to bigoted critics.

Nearly four years later, she does not regret her actions. 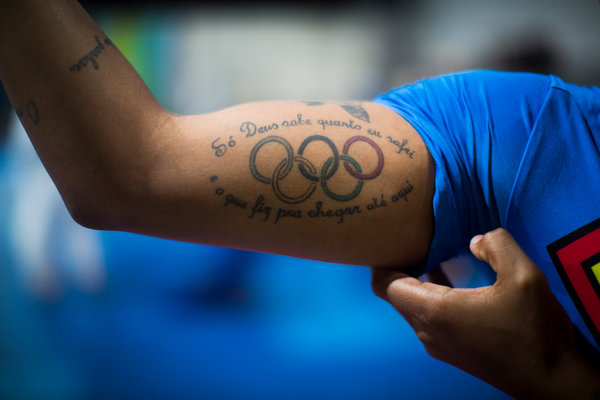 The inside of Rafaela Silva’s right biceps is tattooed with the Olympic rings and a note, in Portuguese: “God knows how much I’ve suffered and what I’ve done to get here.” Leslye Davis/The New York Times

The episode nearly made her quit. She had overcome many obstacles to become one of the world’s best, but the closest she came to quitting was after the London Games, Bernardes said.

“She never showed that she would give up on the sport until 2012, when she was disqualified at the Olympics,” he said. “There were a lot of racist comments on social media. Nasty ones. And she answered some of them, fighting in social media, and got really angry. Then she got scared of going out on the streets and being harassed. I was afraid she would give up on the sport.”

Silva took a few months off. Her family worried for her.

“Rafaela got depressed,” Raquel Silva said. “She watched television all day and cried alone in front of the TV. Our mother cooked her favorite things to cheer her up, but that didn’t work.”

Bernardes wanted Rafaela Silva to come to the institute, to resume training and rebuild the fire. When she finally came, she happened upon a presentation by a sports psychologist. Intrigued and inspired, Silva resumed her physical training and added mental training, too. The next spring, her focus back and her frustration funneled, she became World Champion.

And now the Olympics have come again, this time to her, just a few miles from home. Bernardes will coach her at the institute. Her sister, a weight class below, will spar with her. Her parents are hoping to get tickets to her matches. A nation will watch, expecting a result to celebrate.

And a neighborhood will cheer her on, to see if a young woman from the crumbling, chaotic streets in the hills can construct one of the unlikeliest Olympic stories for the home team.