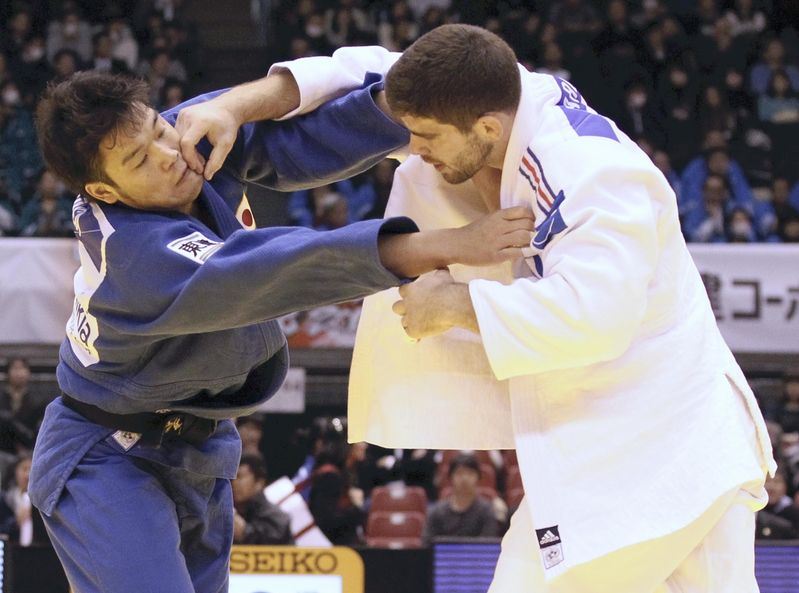 Ryunosuke Haga, left, battles France’s Cyrille Maret in the second round of the men’s 100-kilogram class Sunday in Tokyo.

The home-mat advantage proved to be nothing of the sort for Japan’s struggling judoka in the men’s 100-kilogram class at the Grand Slam Tokyo on Sunday.

Once a weight class that Japan dominated globally, the final day of the three-day tournament at Tokyo Metropolitan Gym only served to confirm a dismal state of affairs.

Japan entered four men in the weight division, and none were present on the podium when the medals were awarded. The best that Japan could do was a seventh-place finish by Kaihan Takagi.

“I’m sure that people think that [Japan] is weak in the 100-kilogram class. We have no choice but to try desperately,” said Takagi, although he seemed to lack a sense of crisis.

The situation manifested itself when, for the first time ever, Japan did not enter anyone in the 100-kilogram class at the world championships in August. At the Asian Games in South Korea the following month, it was the lone weight division out of the 14 for men and women in which Japan failed to win a medal.

“It’s pitiful that not sending anyone [to the world championships] has had no effect,” said former 100-kilogram world champion and current Japan heavyweight coach Keiji Suzuki.

Suzuki could only watch as the team members were pushed around by the foreign opponents and racked up losses one after the other.

“They didn’t use any techniques, and I have no idea what they were trying to do,” Suzuki said.

For the Rio de Janeiro Olympics, which are less than two years away, the top 22 in the world rankings earn berths. The highest-ranked Japanese at 100 kilograms is currently No. 35 Ryunosuke Haga, who lost in the second round Sunday.

Daiki Nishiyama won the silver medal in the men’s 90-kilogram division, while Ruika Sato was runner-up in the women’s 78-kilogram class.