"Judo Jimmy" looking to impress: Jimmy Wallhead's ready to step out of the shadows and impress at BAMMA 12

We chat with hugely respected British welterweight contender, Jimmy Wallhead, ahead of his bout against Matt Veach at BAMMA 12 next weekend

“Judo”Jimmy Wallhead is one of England’s very best MMA fighters and- until recently - one of its most neglected. 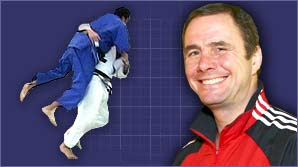 First trained under the near-legendary world champion judoka Neil Adams CLICK HERE: World Champion, 2 x silver olympian 8th Dan Judoka Neil Adams, Wallhead grew slowly and steadily as a Mixed Martial Artist, quietly amassing a reputation as one of the outstanding Welterweights on the UK scene, defeating the likes of the heavy-handed John Phillips and the recently released UFC fighter, Che Mills. That was until 2011 when, stepping in at the last  minute, he was on the winning end of a split decision against one-time UFC title challenger, Frank Trigg; which propelled him into the consciousness of all fight fans.

Now back in the UK, and with his name now known and held in high regard on both sides of the Atlantic, Wallhead was in buoyant mood ahead of his fight against former Division 1 wrestler, Matt Veach, at BAMMA 12 in March. Speaking after putting pen to paper on an exclusive multi-fight deal, he enthused about fighting on home soil and a possible rematch with an old friend.

“It’s a long awaited return for me, really. I had to go and finish off my contract with Bellator. But now I'm back and looking forward to four good fights in front of the British fans.”

Wallhead dropped a decision on his American excursion with Bellator to Tiger Schulmann prospect, Tyler Good. Good’s dynamic kickboxing and stiff jab were the deciding factors in a back and forth clash, but Veach will provide a very different test as an explosive, high-level, wrestler- not an easy style to replicate in Nottingham, where Wallhead’scamp, Team Rough House, resides.

“It's always going to be hard to find someone with identical wrestling skills. But this is MMA and we have some good guys and training partners who will definitely have me prepared for what he's going to bring.”

With his opponent moving up from lightweight and “Judo Jim” having fought in higher weight classes in the past, one may be forgiven for thinking that the match-up was a classic contest of power vs speed. However, on the night, the Midlands native doesn’t think the disparity will be all that great.

“I don't think the weight difference will be that much. He usually makes a big cut to lightweight which I don't think he really wanted to do with the long flight over. It’s been years since I fought at light-heavy, and I only stepped in at Middleweight against Trigg at the last minute- and I was fat! I'm not really that big a welterweight. But maybe there will be a slight speed advantage to him, so I'll have to work hard to impose my game.”

Jim certainly didn’t think the fight would be a simple matter of keeping the fight on the feet. Keen to emphasize his own grappling background, he warned his opponent that he would bring to the cage all elements that befit the modern Mixed Martial Artist, despite the huge strides he has made with his striking in recent years.

“I think if the fight was all boxing, yes, I'd probably come out on top. But I can't see that happening - he has a really fast shot. So, if I were to get reckless with my striking, the speed of his level change could put me on my back, so I have to be sensible.”

“My judo base has helped massively in my transition to MMA.I maybe don't use so many judo techniques anymore. But the base and balance is vital, and I'm not going to go out there one-dimensionally and just try to box him. If the take-down is there I'm going to take it.”

Although Wallhead is firmly fixed upon the task in front of him, he took note of the fact that friend and one-time opponent Che Mills had only this week been released from the UFC after his decision loss to Matt Riddle. The two may respect each other as people and fighters, but it was clear that the prospect of a rematch- possibly for a title- against the currently unattached Mills was too exciting to rule out.

“I'm actually pals with Che. We have no problem with each other what so ever. But if he was up for it, and BAMMA wanted to put us together, I'd do it. It could be a great title fight! But I think BAMMA would have to give him a fight first.You can't fight for a title coming off a loss- same goes for me- I'd expect to need a win or two first. But if it came together what an exciting fight it could be for the fans live on Channel 5!”

BAMMA 12 hits Newcastle’s Metro Radio Arena on 9 March and will be broadcast live in the UK on 5* from 9pm – 11pm. Tickets are available from www.bamma.com and www.metroradioarena.co.uk