Today, at 2:00 pm, the official draw of the Tokyo Grand Slam, 2012 edition, was held in the Tokyo Dome Hotel, downtown Tokyo, in the presence of the 36 heads of delegation present in the Japanese Capital.

One week after the Judo Grand Prix, Qingdao 2012, this event is the last IJF event of the World Judo Tour in 2012. The draw taking place not far from the Kodokan, Mr. Haruki Uemura, the All Japan Judo Federation President and IJF Sports Director, took the opportunity during his welcome speech, to underlined the fact that in 2012, the judo community is celebrating the 130 birthday of the noble institution. In 1882, a young man, Kano Jigoro, founded the Kokokan and created the Judo, who has now become a universal and Olympic activity, practiced all over the world. "I wish all the best to all the delegations in that memorable year" said Mr. Uemura.

Vlad Marinescu, the Director of the IJF Presidential office, who represented the IJF President, Mr. Marius Vizer (on his way to Japan), also warmly welcomed all the delegations, the officials and the referees. "2012 was a very successful year both from a spectator point of view as well as from a media perspective. Tokyo is the very last event of the season and we are happy to say that this year's edition of the Tokyo Grand Slam, for the first time, will be broadcasted over 100 territories", explained Mr. Marinescu.
Then Lisa Alan, who was the Judo Manager of the Excel Venue during the last London Olympic Games, and Armen Bagdasarov, the IJF Sports Director, took the floor to conduct the official draw of the Judo Grand Slam, Tokyo 2012. During the three days of competition, 270 competitors will participate, coming from 36 countries.
PREVIEW
Women's -48kg

Haruna Asami (JPN - WRL 3), winner of last year's edition of the tournament, will be again the favorite of the competition. The winner of the Pan-American championship 2012, Dayaris MESTRE ALVAREZ (CUB), Amélie ROSSENEU (BEL), who is just coming back from China with the Grand Prix Title, JEONG Bo Kyeong (KOR), the winner of the Budapest World Cup last February, or Aurore Climence (FRA), bronze medallist last week during the 1st division French National Championship, will be among the outsiders of the category.
Women's -52kg

Erika MIRANDA (BRA - WRL 3) is the top seeded athlete of the category, but it the quarter final, she might meet with the winner of the last edition of the Grand Slam, Takumi Miyakawa (JPN). In the second half the draw, the most dangerous pretender for the title, will be the London silver medallist, Yanet BERMOY ACOSTA (CUB). Ilse HEYLEN (BEL) and HASHIMOTO Yuki (JPN) have also a good potential to reach the podium.
Women's -57kg

Without the Japanese star, MATSUMOTO Kaori (JPN), Olympic Champion and current holder of the Grand Slam title, the favorite of the category will be Automne PAVIA (FRA - WRL 6), Olympic bronze medallist, last summer in the British Capital. The outsiders of the category will be Jovana ROGIC (SRB), winner of the Grand Slam, Rio 2012, Miryam ROPER (GER), winner of the World Cup, Sofia 2012 and Ketleyn QUADROS (BRA), bronze medalist at the Beijing Olympic Games and silver medallist last week in Qingdao.
Women's -63kg

Urska Zolnir, winner of last year's edition of the tournament, and Olympic Gold medallist, will follow the competition from the stands. As she declared last week in Qingdao, she is only starting again her judo training and does not know for the moment, when and where she will step on the tatami to compete. By the way, it will be in the women's -70kg. JOUNG Da-Woon (KOR - WRL 8) is the top seeded athlete of the category. The second half of the draw is quite open for Yarden GERBI (ISR) and Clarisse AGBEGNENOU (FRA), who might meet in the semifinal, if they can pass a first tricky round respectively against KIM Seulgi (KOR) and TASHIRO Miku (JPN).
Women's -70kg 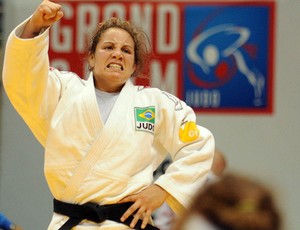 Maria PORTELA (BRA - WRL 3) will be the favorite of the upper part of the draw, when in the lower part of it,

Haruka TACHIMOTO (JPN), should reach at least the semifinal without any big difficulties. The Japanese was the only one who defeated the Olympic Champion, Lucie Decosse, in 2012. It was last February on the occasion of the Judo Grand Slam, Paris 2012.
Women's -78kg

OGATA Akari (JPN - WRL 4) was the winner of the 2011 edition of the Grand Slam, in Tokyo and for sure she wants to add a new gold medal to her prize list. But it is probably not the opinion of

The London Olympic Champion and world number 1, ORTIZ Idalys (CUB), will be present during the weekend on the tatami of the Yoyogi National Gymnasium. In the absence of SUGIMOTO Mika (JPN), winner of last year's Grand Slam, the second half of the draw should be dominated by

KIM Won Jin (KOR), who's most significant result is a gold medal at the Shenzhen Summer Universiade 2011,

and the French, Sofiane MILOUS, European Champion last year in Vienna, who finished at the 5th place during the last Olympic Games.
Men's -66kg
The predictions in the men's -66kg are really difficult as many athletes have the profile to win or at least to step on the podium. Therefor, it will be interesting to follow, CHO Jun-Ho, bronze medallist in London last summer, Dimitri DRAGIN (FRA), who recently won the World Cup in Roma (September), MORISHITA Jumpei (JPN), world champion in 2010 (Tokyo), Leandro CUNHA (BRA), two times silver medallist at the world Championships, Rishod SOBIROV (UZB), the world champion and former world number one in the men's -60kg category, David LAROSE (FRA), winner of the Grand Slam 2012 in Paris, or FUKUOKA Masaaki, TAKAJO Tomofumi, both from Japan, and Sugoi URIARTE (ESP).
Men's -73kg
NAKAYA Riki (JPN - WRL 2) will be the favorite of the competition and he should have an easy way to the quarter-final. In Pool B, Murat KODZOKOV (RUS) will be the favorite, where in pool C, it will be Dirk VAN TICHELT (BEL) and Mirali SHARIPOV (UZB) in pool D.
Men's -81kg
With no doubt the ultimate favorite of the category will be the world number one and Olympic Champion, KIM Jae-Bum. But Victor PENALBER (BRA), gold medallist last week in Qingdao and winner of the Judo Grand Slam in Rio just before the Games, will try to thwart the plans of the champion. In the second half of the draw, MAGOMEDOV Sirazhudin (RUS) and NAKAI Takahiro (JPN) will be the favorites to reach the semifinal.
Men's -90kg
World number one, NISHIYAMA Masashi, who already won the tournament last year, will be present at the top of the draw, the second top seeded athlete of the category being Kirill VOPROSOV (RUS). The rest of the men's -90kg is quite open.
Men's -100kg
Maxim RAKOV (KAZ), world Champion in 2009 and silver medallist last year in Paris, will be the favorite, the three other top seeded athletes being Thierry FABRE (FRA), BATTULGA Temuulen (MGL) and Renan NUNES (BRAZ). It will be interesting to follow the competition of Ilias ILIADIS, Olympic Champion and World Champion, who for the moment is not ranked in that category. But things can change after the tournament.
Men's +100kg
The level of the tournament will be very high in the men's heavy weight category. Even if World number one, Teddy RINER (FRANCE) is not present in Tokyo, WRL 2, Rafael SILVA (BRA) and Andreas TOELZER (GER), both Olympic Medallist, will be present in the Japanese Capital city, as well as the Open World Champion from 2010, KAMIKAWA Daiki (JPN) and WRL 5 from Korea, KIM Sung-Min.
____________
Program
Friday Nov. 30th - Men's -60kg and -66kg / Women's -48kg, -52kg and -57kg
Saturday Dec. 1st - Men's -73kg and -81kg / Women's -63kg and -70kg
Sunday Dec. 2nd - Men's -90kg, -100kg and +100kg / Women's -78kg and +78kg
Preliminaries
everyday start at 11:00am (local time)
Final Block
Day 1 - 4:20 pm to 7:00 pm
Day 2 - 4:40 pm to 7:00 pm
Day 3 - 4:20 pm to 7:00 pm
Online
News: http://news.ijf.org/archive/news1/time.html
Live results: www.ippon.org/gs_jpn2012.php
Live streaming: www.ippon.tv (subject to the TV rights policy in the respective countries)
Facebook: http://www.facebook.com/ijudo
YouTube: http://www.youtube.com/judo
Twitter: @IntJudoFed
SOURCE: ijf.org
CLICK HERE: Judo Talk Events Page