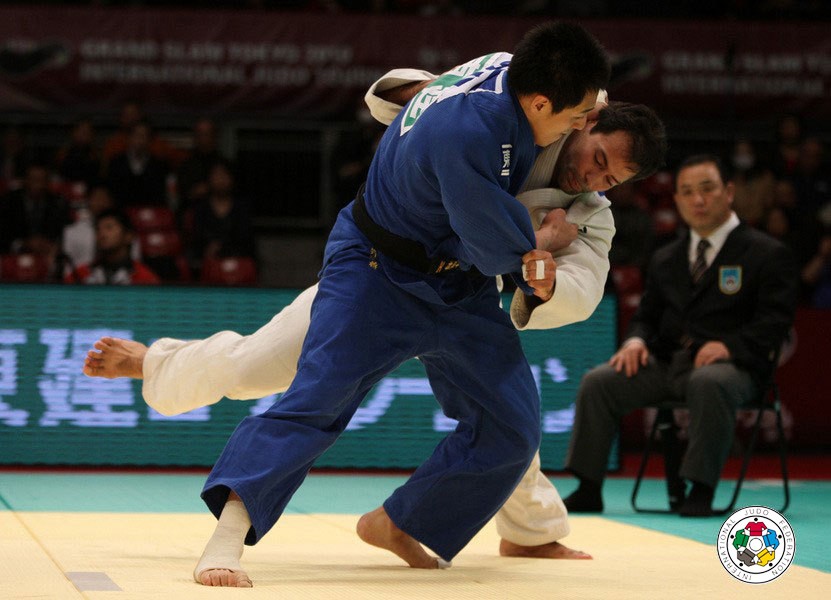 World champion at -100kg Anai Takamasa (JPN) won his second title in Tokyo in the space of three months when he took gold in front of an appreciative audience at the Grand Slam in Tokyo’s Metropolitan Gymnasium.
Following his world championship winning performance in September Anai was comfortably the best on the day and was only really tested in his semi-final when he faced former world champion Maxim Rakov (KAZ). In a very close match Anai was taken to extra time where he took the contest deservedly on a hantei. The final however was a timid affair with Anai’s opponent, the mercurial Ariel Zeevi (ISR), intent more on avoiding a repeat of his embarrassing seven-second loss to Anai at the world championships three months ago. Whilst understandably tentative of Anai’s explosive abilities Zeevi regrettably had somehow forgotten, or at least did not trust, his own exceptional throwing skills that had been so evident earlier in the day. Zeevi had begun in terrific style by blasting his way past Martin Pacek (SWE), Temuulen Battulga (MGL) and reigning Grand Slam champion Hwang Hee-Tae (KOR) but then froze uncharacteristically at the final hurdle with Anai. "I hadn't won a single Grand Slam this year, so I was determined to do it in Tokyo," said world No. 1 Anai after his defeat of Zeevi. But Japanese men's head coach Shinichi Shinohara, who can often be scathing about some of his players, believed that Anai's win was an indicator to the kind of judoka he has become. "Anai was far from his best, there's no question about that," Shinohara said. "But he found a way to win, despite his form, and that means something." Anai is likely to be seen competing next at the IJF Masters in Azerbaijan when the world’s best gather next month.