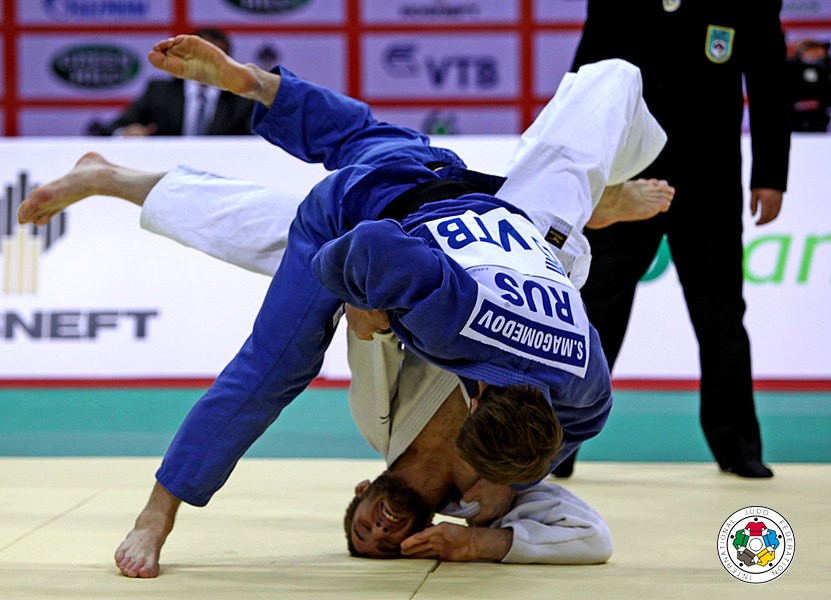 The final event of the year ended on a high for a rampant Russian men’s team who took four gold medals to top the medal table here in Qingdao. From a team of 12 Russian fighters only two failed to get to the podium, an incredible result for any team away from home.
Sirazhudin Magomedov -81kg (RUS) faced his stiffest test in his semi-final match against Travis Stevens (USA). The Russian won the contest with a jujigatame that left Stevens in some degree of discomfort. “I would have done exactly the same thing,” said Stevens in response to whether or not Magomedov was over enthusiastic in his application of the armlock. Li Maojian (CHN) caused Magomedov less of a problem in the final but despite being thrown for ippon showed such promise that one could hardly believe his world ranking position of 178. Kirill Denisov (RUS) was at his devastating best in winning the -90kg. His quarter-final win against Matthieu Dafreville (FRA), who was making his return from injury to international competition, was an exciting and thrilling encounter with Denisov coming out on top. European champion Marcus Nyman (SWE) was thrown for ippon in the semi-final with a stunning tani otoshi by Denisov. Kim Kwan-Ho (KOR) had no answer in the final for Denisov who disposed of the Korean with speed and skill. Sergey Samoylovich (RUS) capped the Russian performance with his gold in the -100kg. His ippon against Martin Pacek (SWE) was a candidate for ippon of the day. But it was his koshi guruma for ippon, just as he was running out of steam, in the final against Temuulen Battulga (MGL) that will have pleased him most. Magomedov was back on the podium to collect an award for Male Player of the Tournament. The Female Player of the Tournament went to Priscilla Gneto (FRA) for her win in the -52kg category. Denisov collected the male ippon trophy whilst Yang Xiuli (CHN) took the women’s ippon trophy for her ippon seoi nage against former world champion Mahinde Verkerk (NED).