France's Olympic judo champion Lucie Décosse's three world gold medals have been stolen in a burglary at her home outside Paris, police confirmed on Tuesday. 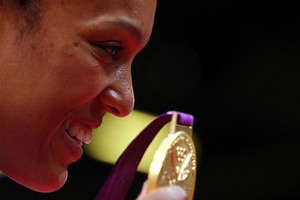 The 31-year-old athlete's home at Thiais, in the southern suburbs of the French capital, was broken into while she was attending the national championships in Montpellier as a spectator between November 23th and 25th.

"It's not the end of the world but it's annoying," the judo champion said.

"These rewards have very strong memories for me," she said.

"Luckily I had my Olympic medal with me. If they had taken that one."

Décosse finally landed the only major title to elude her when she claimed Olympic gold in the women's under-70-kilogram category at the London Games last August, adding to her three world titles and four European crowns.