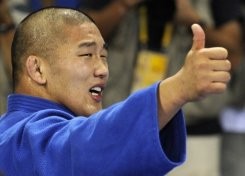 TOKYO — Olympic judo heavyweight champion Satoshi Ishii, now a mixed martial arts fighter, has swept all before him in his return to the sport at the US national championships.

The 24-year-old Japanese won the open-class title in a field of 13, none of them world-class competitors, at the nationals on Saturday in Orlando, Florida, according to Japanese media and the tournament's website.

"As judo champion, I want to aim steadily for the Olympics hereafter," Ishii told the Sports Nippon daily.

Despite winning the US title, he cannot compete in the world championships in Paris in August because he does not have US citizenship.

Ishii said last year that he might obtain US citizenship after he is granted permanent residency -- allowing him to represent the United States at the Rio Olympics in 2016.

Ishii won the over-100 kg title at the 2008 Beijing Games but gave up judo soon after when the sport's national association did not approve his plan to double as a judoka and a professional fighter in mixed martial arts (MMA).

He made his MMA debut in late 2009 and has lived in Los Angeles since July last year.

Competing in judo for the first time since his glory in Beijing, Ishii won his first match by walkover.

He then threw Kyle Vashkulat, ranked 27th in the world in the 100-kg division, with a body drop in the second match, Kyodo news agency said.

He disposed of his semi-final opponent, Adrian Alonzo, with a sliding collar strangle and dumped Jacob Stromecki with an inner thigh throw just nine seconds into the final.

"It's been a long time since fighting in judo and my techniques are a bit rusty. I think my hand grips were also sloppy," Ishii told Kyodo. "I'm a mixed martial artist, so I don't feel emotional about a return to judo."

Ishii was not considering a full-time return to judo for now but said "I want to give an impact on the world of martial arts", according to Jiji Press.

Comment by jt_development on May 1, 2011 at 1:31pm
Things sure will change if Satoshi Ishii gets his U.S. citizenship before Rio Olympics in 2016!!!

Comment by Dave R. on May 1, 2011 at 12:02pm
The Japanese media is correct in saying the United States doesn't have any world-class competitors in that weight division.