Now over eighty years young, Sensei Joe Kajita was born in  Yamaguchi Prefecture of Japan in June of 1931, Sensei Kajita began studying Judo at age of 7 yrs. When Sensei moved to Tokyo, he studied at the Kodokan under the tutelage of Kotani Sensei 10th Dan, and took the position of Assistant Instructor. At 20 yrs of age, Sensei won the Kanagawa Prefecture Championships, becoming Grand Champion, after defeating Isao Inokuma 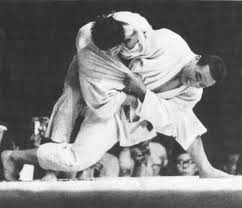 (At left, The Great Isao Inokuma)

When Sensei was 25 yrs old, he emigrated to America, and during that first year fought in the National Championships, winning 1st Place in the Team Division.

In 1956, Sensei was drafted into the US Armed Forces, and wasted no time in winning the US Forces Championships, defeating Sea Born, the current USA National Wrestling Champion. In 1958, Sensei went on to win the Midwest Championships, becoming Grand Champion- after defeating John Osako, Hank Okamura, and Frank Razensky, all reigning National Champions. During his downtime, Sensei taught at Chicago’s largest Judo dojo the Chicago Buddhist Temple, as Head Instructor.

In 1987, Sensei moved to California where he joined the Orange Co. Kodokan, assisting Head Instructor Shag Okada. In 1998, he opened El Toro Dojo on Forbes Rd. It is with great respect that we mention Sensei Kajita’s participation in the Masters Championships, and from the age of 50 yrs old, he has won 1st place five times. And at the ripe young age of 75 yrs, appears completely unstoppable.

Over the course of his lifetime, Sensei has taught many rising Judo stars, including Bob Berland, Olympic Silver medalist at the 1984 L.A games, Hillary Wolf and may others. In addition, Sensei is a renowned Kata judge, and has a detailed knowledge of the official seven katas of Kodokan Judo.

Sensei has spent his lifetime dedicated to the sport of Judo, and we value and respect his knowledge and expertise. Sensei Joe is always at the dojo and has that 'special old trick' that was used many years ago and seems perfectly valid in today's competitive environment.

Sensei Kajita is the founder of the El Toro Judo Club. He holds an  eighth dan (red & while belt) awarded from the Kodokan in Japan.
Sensei has practiced and competed with some of the best judo players
in the world. He is an active and integral part of the local, national, and
international judo community.