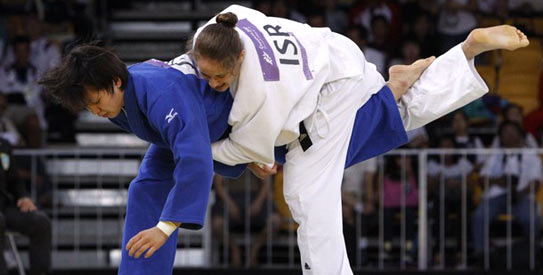 Israeli and Palestinian judo players will be in Fukuoka, western Japan for the tournament.

TOKYO: Israeli and Palestinian teenagers are gathering in Japan to participate in a judo tournament as organisers hope to promote world peace through the sport, a renowned Japanese judoka said Monday.

Yasuhiro Yamashita, 53, gold medallist in the open category at the 1984 Los Angeles Olympic Games, said he had invited them to the one-day tournament on Sunday in Fukuoka, western Japan.

“Through exchanges with Japanese and overseas participants, I hope the Israeli and Palestinian children will learn and experience many things and nurture friendship,” Yamashita told a news conference.

“One of the most important things in the spirit of judo is to respect an opponent, who is not an enemy but someone who helps you improve yourself,” Yamashita said.

During their trip, supported by a group that Yamashita founded in 2006, the children will also join other programs, including a visit to the Hiroshima Peace Memorial Museum on Tuesday.

The invitation came after Yamashita and Kose Inoue, another celebrated Japanese judoka, visited Israel and the Palestinian territories in July to hold a workshop for children.

During their visit, the two judoka trained 32 Israeli and 25 Palestinian students, and more than a dozen of them arrived in Japan last week.