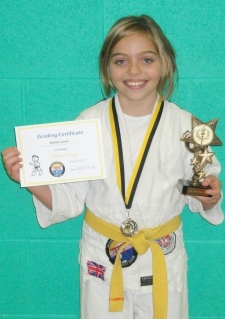 BASSINGBOURN Judo Club is extremely proud after several of its young members took part in the Junior Judo Tournament in Cambridge on Sunday.

The event was arranged to honour Terry Welham, who used to teach judo in several private schools in Cambridge for many years. A presentation was made to Welham and his wife at the start of the day.

The club were particularly proud of Racher, Reader, Harris and Waldock who were competing in their first ever tournament.

There were also two special trophies for the best throw of the day by a boy and a girl as well as a Fighting Spirit medal.

And so it was a doubly special day for Kamie Lowe who picked up the Best Girl Throw award, to end quite a successful day for the club. .