By Eoghan Macguire, for CNN

(CNN) -- Inspirational music has long served to focus the mind of some of the world's greatest sporting stars.

Retired swimming champion Michael Phelps swore by the grizzly bark of rapper DMX, while former England footballer Stuart Pearce was known to crank out the snarling punk of the Sex Pistols.

For giant judo champion Teddy Riner, however, the motivational music of choice is something altogether more sensitive. 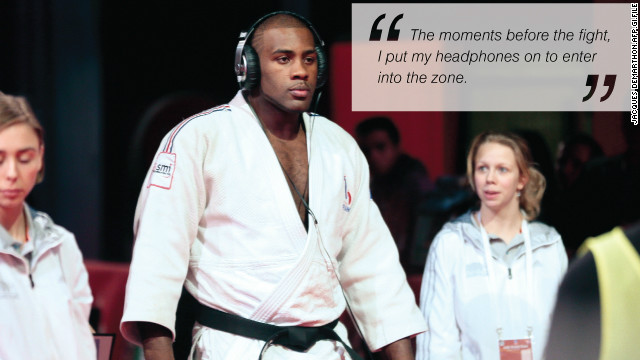 "The moments before the fight, I put my headphones on to enter into the zone," Riner told CNN's Human to Hero series.

And on his iPod, alongside a dollop of rap and dance music, the Frenchman confesses to getting pumped up on the power ballads of Celine Dion.

The Canadian diva may seem like an unorthodox motivator for a sport where brute strength and controlled aggression are key.

But the tuneful preparation has already helped the man nicknamed the "Teddy Bear" shape up for spectacular success -- a long way from his early days, when he admits to being "a bit useless." 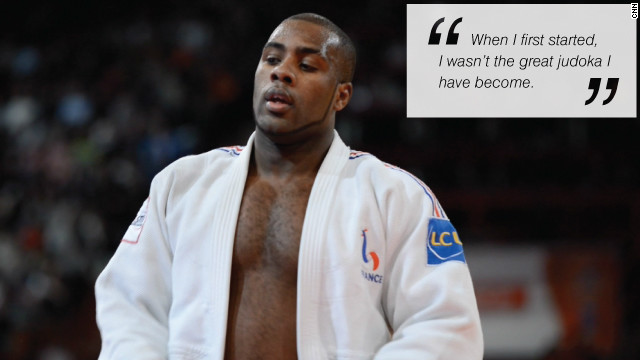 He also picked up a bronze at the Beijing Games of 2008 and has twice been crowned Europe's best.

Born in the French Caribbean island of Guadeloupe, Riner was raised by his parents in Paris.

A self-confessed bundle of energy as a child, he was encouraged to hit the tatami (judo mats) at a small club in the city.

Given his sheer size and athleticism, he was a natural and soon fell in love with the sport. 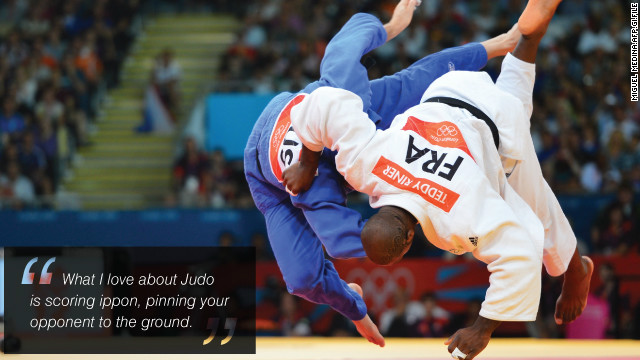 The goal of achieving "ippon" -- the fight-ending maximum score a judoka receives when a move that flips or throws an opponent onto their back is executed -- was a source of particular pleasure for the young Riner.

"Before judo I did many other sports," he explains. "I did tennis, basketball, swimming, golf ... squash, football. I stuck with judo because of the call to score ippon.

"To win a fight there are rules, a technique. The two shoulders of the opponent must touch the tatami. If the two shoulders touch with speed and impact on the floor, it's ippon (and) it's won."

Like any athlete operating at the elite level of their chosen sport, Riner adheres to a strict training program that requires unwavering discipline and a robust frame of mind.

In judo, more so than other sports, these qualities are especially valuable.

The philosophy of self-control and respect for one's opponent outside the arena is just as critical to master as the physical conditioning for when the fight begins.

"You need to be strong up here," Riner adds, tapping his head. "The opponent in front of you may be strong, tall, thin -- you have to work hard to get ippon. 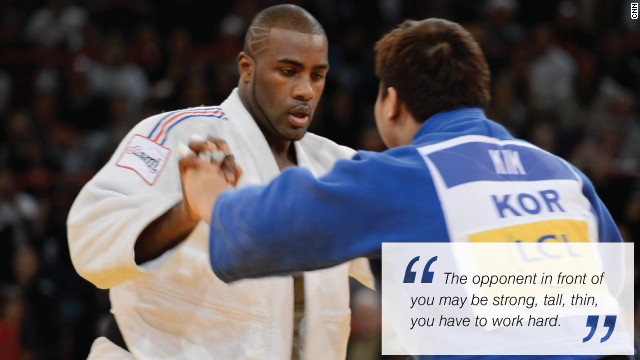 "It's this that makes the difference, you can't let anything go."

While an array of medals and championship-winning performances suggest Riner has mastered both the mental and muscular side of his sport, he is quick to point out that his path to the top was far from smooth.

"I don't think I have a gift. You should have seen me when I first started, I wasn't the great judoka I have become," he says. "I was a bit useless."

"Today it is true that with a lot of work and a lot of assiduousness I have succeeded in forging a good judo, a good character and an intelligence for the fight," he adds. 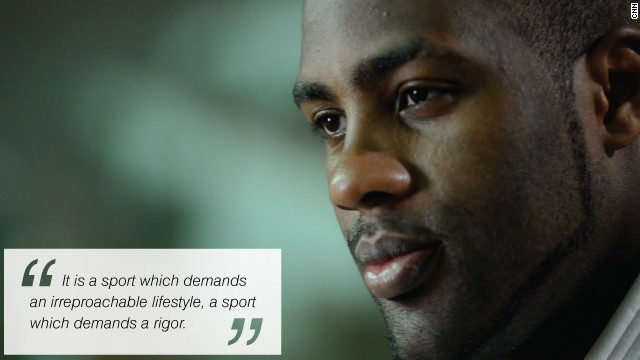 "My secret to winning, I think, is the fact that I am so determined in my training, to put myself in the red, always pushing the limits."

This desire to constantly improve is undoubtedly made easier with a genuine enjoyment and appreciation of the intricacies of his sport. 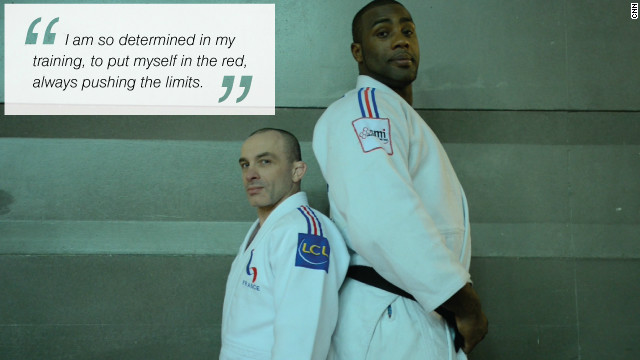 But while some athletes look for distractions once away from competitive arena or training field, Riner remains firmly attuned to his sport. 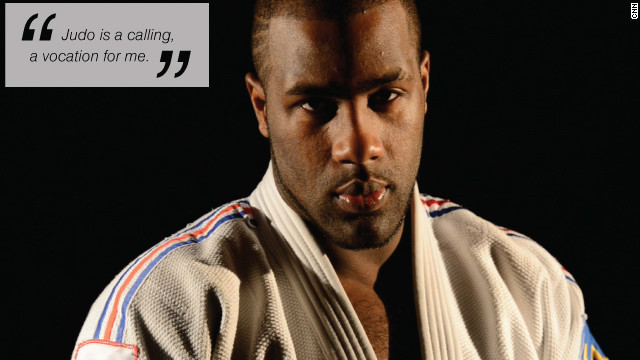 "Judo is a calling, a vocation for me," he enthuses. "Sometimes we finish a training session and I'm tired, but a few hours later I already feel like playing again.

"For me it's not a work or a sacrifice, it's a game and it's a pleasure. The day I no longer feel like playing on the tatami ... I'll stop."

For now, the day that Riner hangs up his kimono seems a long way off.

Still very much in his youth and operating at a level few of his peers can match, there seems little capable of subduing this Goliath of the mats or his hunger for success. 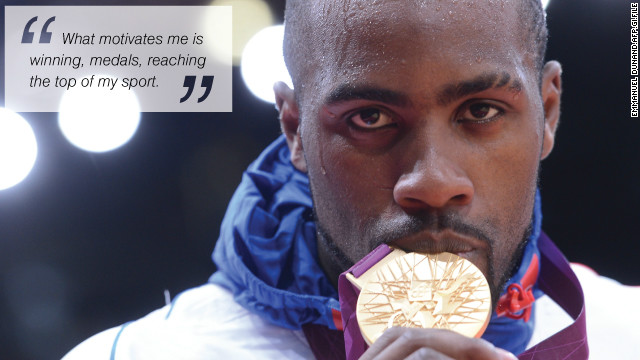 "What motivates me is winning medals, reaching the top of my sport," he says.

"I have my mentality, I have my way of being, I have my personality which makes me a fighter. I am a real fighter, and I love that." 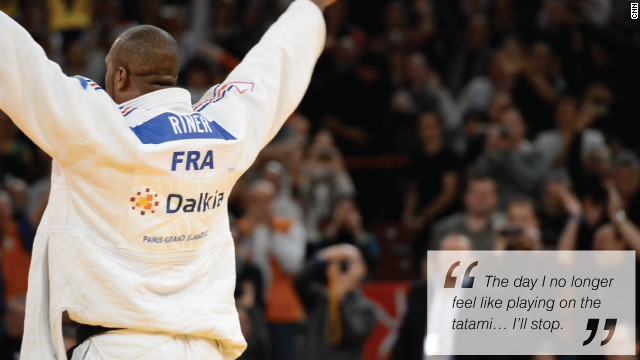