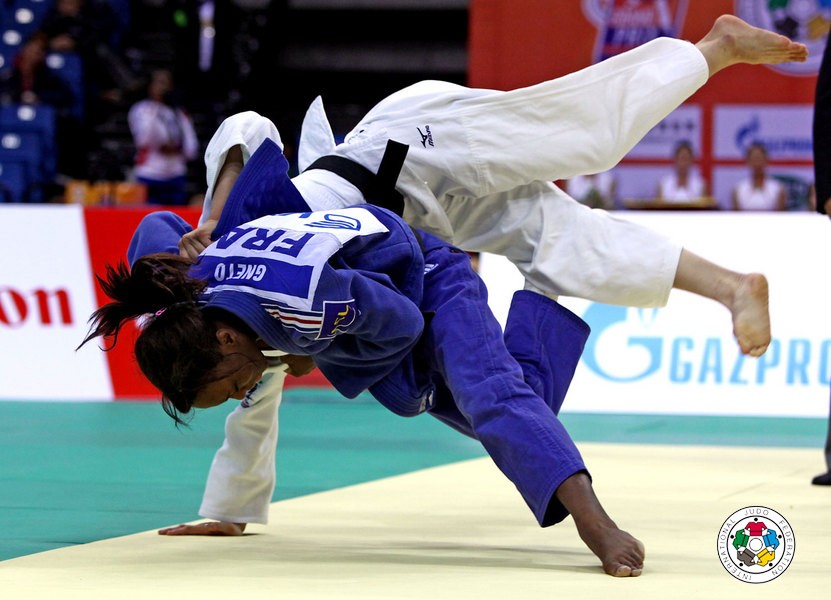 It seems that every week the French are able to introduce another judoka to make a mess of the ranking list. Last week it was 18 year-old Clarisse Agbegnenou (FRA) who walked away with a Grand Slam gold medal from Tokyo despite being ranked only 28th in the world.
Today it was the turn of Pricilla Gneto (FRA) -52kg, another French teenager, whose attacking and explosive style proved too much for the rest of the field here at the Grand Prix in Qingdao. After a first round bye 19 year-old Gneto defeated Kitty Bravik (NED) and team mate Penelope Bonna (FRA) to set up a semi final match with No. 1 seed Laura Gomez (ESP). It was a hard fight with plenty of big attempts to throw, mostly from Gneto, one of which ended up throwing Gomez for ippon. The final with Kagaya Chiho (JPN) did not really test Gneto who won the contest on a single yuko and was able to celebrate her first senior international medal. The French were able to celebrate another gold medal when Ugo Legrand (FRA) threw Murat Kodzokov (RUS) with te guruma for ippon in the final of the -73kg category, and it did not stop there for the French. There were silver medals as well for Laetitia Payet (FRA) and Automne Pavia (FRA) -57kg, whilst Sarah Loko (FRA) and Benjamin Darbalet (FRA) took bronze medals to put France at the top of the medal table at the end of day one. Tomorrow is the turn of the dangerous Audrey Tcheumeo (FRA) to whom the French will be looking for more success.