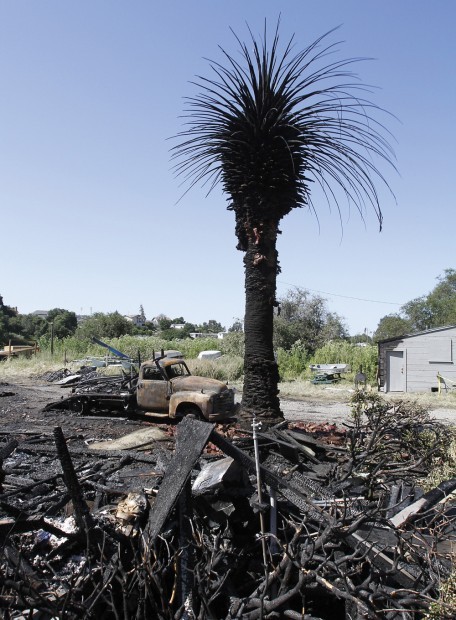 A fire that burned a 1920s-era schoolhouse last weekend in Arroyo Grande not only destroyed a Scout troop’s hall, camping gear and fundraising materials, but also nearly a century of memorabilia.

It also left as many as 64 Boy Scouts, Sea Scouts and Venture Crew members without a meeting hall to call their own.

“I’ve got Scouts walking around in a daze, Scouts asking, ‘What’s next?’” Troop 413 Scoutmaster Chris Hagerty said. “I’ll be meeting with them tonight and trying to explain that we lost stuff, and we can replace some of that.

“But it’s going to take a long time before we forget this,” Hagerty added. “I’ve got kids in the troop whose dads were in the troop in that building.”

The blaze also left the nonprofit Five Cities Judo Dojo without a home, and more than $10,000 worth of practice mats were incinerated, said Sensei Greg Rubio.

“Basically, that’s the livelihood of the dojo,” Rubio said Monday. “You can’t do judo without mats like you can karate, which is mostly kicks and jumps. Judo is all throws. If you don’t have mats, it’s pretty much impossible to do those.”

Rubio has used the Scout hall as his dojo for 16 years, often providing classes free for students whose families couldn’t afford the cost.

"I did it all because I love the sport," Rubio said. "I do it for free as much as I can. I take them to tournaments for free."

Troop 413’s meeting hall and an adjacent building at 490 E. Cherry Ave. went up in flames sometime after 4 a.m. Sunday.

A Scout family’s vintage flatbed truck and patrol boxes filled with tents and other camping gear were destroyed. Sails on several Sea Scout boats were damaged beyond repair.

But perhaps the greatest losses for Troop 413 were fundraising materials and irreplaceable memorabilia.

“We lost our biggest fundraiser of the year,” Hagerty said, referring to confetti-filled eggs Scouts sell at the Arroyo Grande Valley Harvest Festival.

“We were more than half done, and now they’re all burned up,” he said, noting that the troop sells up to 900 dozen eggs at the festival. “Not to mention the booth we sold them out of. It burned up, too.”

Hagerty said the eggs can be replaced, but much of what was lost can’t be.

The troop traces its origins back to the 1920s, he said, so the fire burned up more than 90 years of memorabilia, including troop flags, event ribbons and framed photos.

A piece of South County history also went up in smoke.

The hall was used by the Japanese Cultural Society as a community center for weddings, Shinto and cultural classes before World War II.

“I’ve had a number of Japanese families come by to see the devastation,” Hagerty said. “For them, it’s a huge loss, too. For some of them, this is where grandma and grandpa got married.”

Hagerty said the troop plans to set up an account for tax-deductible donations. But because the historical hall is now gone, the land will probably sold to developers.

“We’re going to have to build a building, one way or another,” Hagerty said.

Rubio said he had no insurance on his dojo mats and isn’t sure how he’ll replace them or where his classes will meet.

Like the Scouts, he hopes to set up an account to accept donations once the investigation into the cause of the fire is completed.

The cause fire remained unknown Tuesday.

But Hagerty believes it was started by “some kids” who broke in last week, poured out bleach and pine cleaner, scrawled graffiti, stole an American flag and started five fires.

“I suspect it was the same kids,” Hagerty said. “I think part of that (belief) is that I hate to think there are two sets of kids who would try to burn down the Scout hall.”

If that’s the case, Rubio wants justice for his judo students and all the “blood, sweat and tears” he put into the dojo.

“If it was an accident, so be it,” he said. “If it wasn’t, I want those people to pay. This is intolerable. It’s just a tragic loss. It really is.”

To help the Scouts, judo dojo