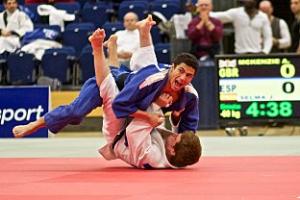 Ashley McKenzie is the new European U23 champion. PICTURE BY MIKE VAREY.

The gold medal is a career best for the 21-year-old who last year settled for bronze at the event in the U60kg weight category.

McKenzie put on an impressive display throughout the day, winning three out of four fights by ippon.

After a bye in the first round, it was Yanislav Gerchev of Bulgaria who was first to feel the wrath of McKenzie first, followed by Andrej Klovoc of Lithuania in the third round.

Now in the semi-final, the pressure was on to win his fight against Olle Sundstroem of Sweden and better his bronze medal from last year but McKenzie kept his cool and secured his place in the final with an ippon throw.

Fighting for the gold medal, McKenzie took on Robert Mshvidobadze of Russia, the 2009 U23 European Championship silver medallist.

It was a gripping final and McKenzie was the first to score, gaining a yuko.

He then kept the pressure on the Russian went further ahead scoring a waza-ari.