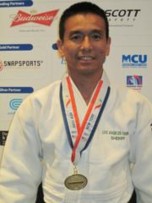 He had not planned to compete in the 2011 World Police and Fire Games, but was convinced to do so when reminded by a New Jersey police officer that his presence in New York within weeks of the tenth anniversary of 9/11, would honor those whose lives were lost.

At 53 years old, Deputy Matsumoto competed in the 40-50 year old Judo Master 60 kilogram weight division this year, because there were no Grand Masters his age with whom he could compete. The silver and bronze medals went to competitors from France and Russia, respectively. 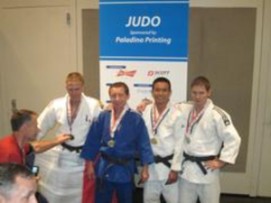 Hurricane Irene hit in the midst of the games and some of the competitions were cancelled for safety reasons and because some first responders had to return to duty. But the Judo competitors banded together and were able to flip the odds and hold their matches, with the gold medal match taking place in New York on August 30, 2011.

Deputy Matsumoto has been training in Judo for thirty-nine years, and in 1980 was a finalist for the United States Olympic Judo Team. As a member of ten United States National Judo teams, he has traveled to many countries around the world (including the former Soviet Union, Cuba, Germany, and Japan).

Mickey has said that he especially loves to compete in the World Police and Fire Games because he loves "to represent the Los Angeles County Sheriff's Department”.

Mickey competed in his first Junior National competition in 1969, and went on to become a Judo instructor in Los Angeles County, saying about his students, "I want to give these kids the same opportunity I've had to enjoy this sport and to have the chance to travel to places I would have never had the opportunity to travel to if not for our Judo." He added, "I continue to compete because I love the sport. I also try to be a good role model and to keep up with the changing techniques in order to give back to the sport by teaching kids."

With 31 years of experience with the Los Angeles County Sheriff’s Department, he is one of the most tenured deputies at Men's Central Jail, and does an outstanding job of supervising inmate workers, maximizing safety and productivity.

Besides being a hard working deputy and a world class athlete, Mickey tops his list of priorities as a devoted husband and father of three. Mickey really enjoys when he is able to bring his family with him on his various competition travels, so they can enjoy the sporting events as well as go sightseeing together. He pays his own way to compete.


History of the Police and Fire Games

The concept to promote sport and fraternity within the Police and Firefighting communities began in 1967, with the staging of the first ever California Police Olympics. This concept continued to grow and culminated in 1983, with the creation of the World Police & Fire Games Federation. The first World Games were held in 1985, in San Jose, California, attracting almost 5,000 competitors. Held biennially, the Games have been hosted by numerous countries throughout the world, attracting as many as 8,000 world class athletes from over 70 countries.

A total of 46 core sports are standard, ranging from angling to wrist wrestling. Additionally there are 24 optional sports that help to meet the requirements of 69 total sports. Each ten day event begins with a grand opening ceremony, and continues with numerous planned social events and a memorial service spread throughout the week. The festivities culminate with the passing of the flag to the following host at the closing ceremony.

The board of the World Police & Fire Games Federation are drawn from active and retired members of the law enforcement and firefighting communities. The mission of the organization is to create community interaction and awareness, educate children on the benefits of sport, and develop camaraderie between members of the emergency services from around the world. In an effort to develop a better rapport with the local community, all host cities are required to create and implement a legacy program that will leave a lasting, positive impact, upon the community they serve.

Since the first Games in 1985, attendance has continued to grow, world records have been broken, and lasting friendships forged. Sport and friendly competition, as expressed through the World Police & Fire Games, has the ability to overcome national boundaries and political ideals, replacing it with a camaraderie that has no borders.