The three-day Grand Prix concluded on Sunday as the heavyweights rounded off an fascinating competition at the Dom Sportova which featured Rio 2016 Olympians, World Judo Masters medallists, and an abundance of young newcomers to the tour who have designs of earning selections for Grand Slams and the World Championships in the upcoming 12 months. .

Russian were the runaway leaders at the Zagreb Grand Prix 2016 as they finished with a stunning medal haul of three gold, three silver and five bronze ahead of Poland and France who impressed on all three days in Croatia.

Mr. Vladimir BARTA, IJF Head Sports Director, said that the Zagreb Grand Prix had been an exciting competition which unearthed several new judoka who are clearly destined to reach the summit of the sport.

“We have seen a new generation of judoka here in Croatia and this is very encouraging and good for judo fans. I have to highlight the success of Barbara MATIC on Saturday, she said was not feeling 100% but still won gold and achieved a great result for her Federation and supporters.

“Many countries who only medalled at the Rio 2016 Olympics in judo were also present here in Croatia such as Kosovo and they introduced new judoka to their team with very strong results. The impact of their Olympics results gives them a platform to develop their team and judo in their respective countries and we congratulate them on their continued growth in our sport.”

The IJF World Judo Tour now leaves Europe and ventures to Asia with everything still to fight for in 2016 with two Grand Prix and a Grand Slam still to come in the final quarter of the year. Uzbekistan is the next host city as the Tashkent Grand Prix will take place from 6 - 8 October with Japan, Russia, Mongolia and Kazakhstan among the competing nations.

Uzbekistan will field a maximum team of 56 judoka while neighbours Kazakhstan have entered a team of 23 and Russia have picked 19 judoka. 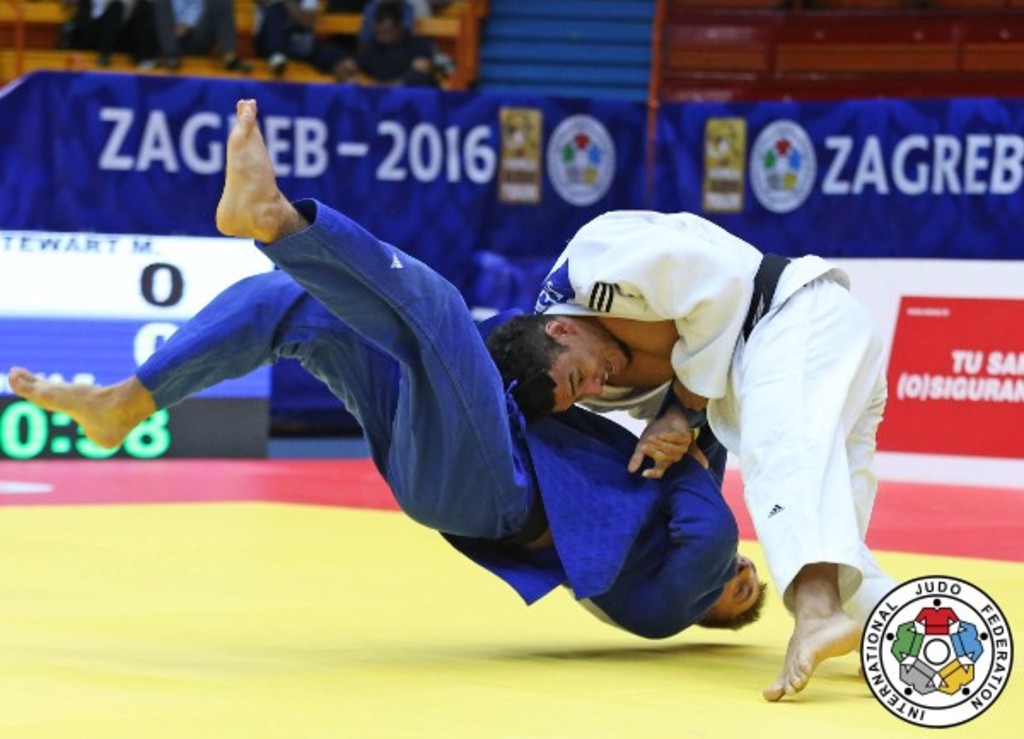 Budapest Grand Prix bronze medallist JOO Abigel (HUN) has a short-term long of winning her home World Championships next year in Budapest and a long-term goal of winning the Tokyo 2020 Olympics. JOO, 26, finished seventh at the Rio 2016 Olympic Games – having finished fifth at London 2012 while her -78kg final adversary Guusje STEENHUIS (NED) was overlooked for Rio 2016 by the Dutch Judo Federation. World Judo Masters bronze medallist STEENHUIS started the day as the favourite for gold but JOO outworked her in the gold medal contest and scored a yuko from a ko-uchi-gake with 40 seconds left which was the only score of the four minute contest. 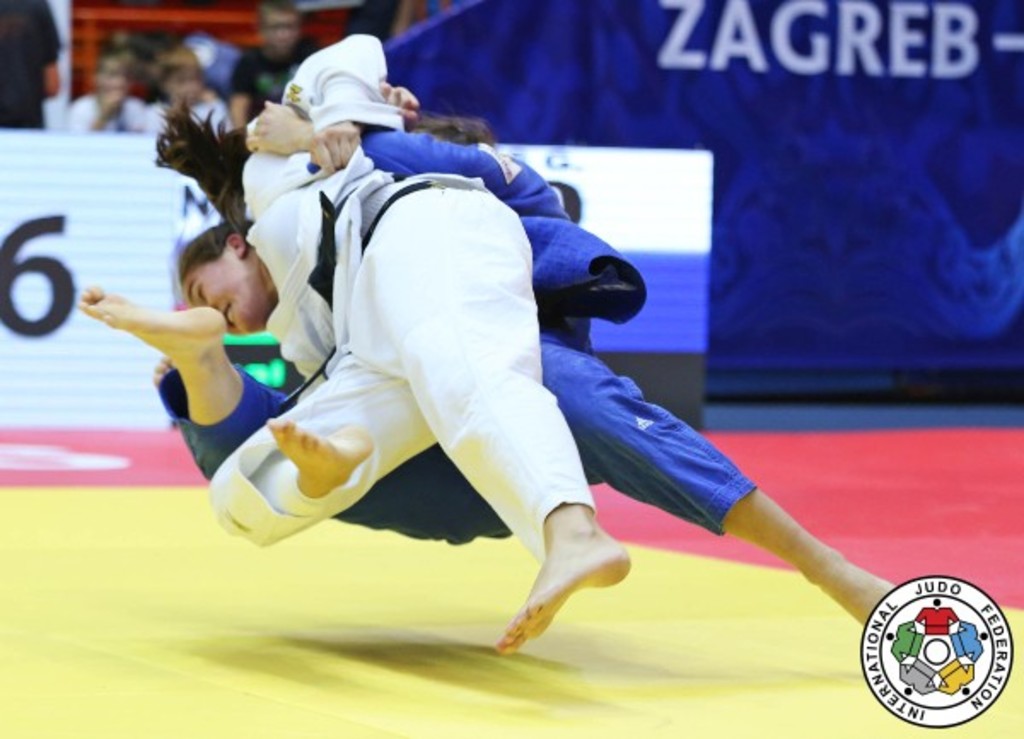 In the first semi-final STEENHUIS needed a last-gasp waza-ari score to see off Brigita MATIC (CRO) as the latter was unable to follow in her older sister’s footsteps but could still maintain hope of a route onto the medal podium. Former Youth Olympic Games winner Brigita was leading with a yuko from a makikomi effort but lacked composure in the final seconds and the seasoned Dutchwoman STEENHUIS produced the biggest score of the contest to advance into the gold medal contest. 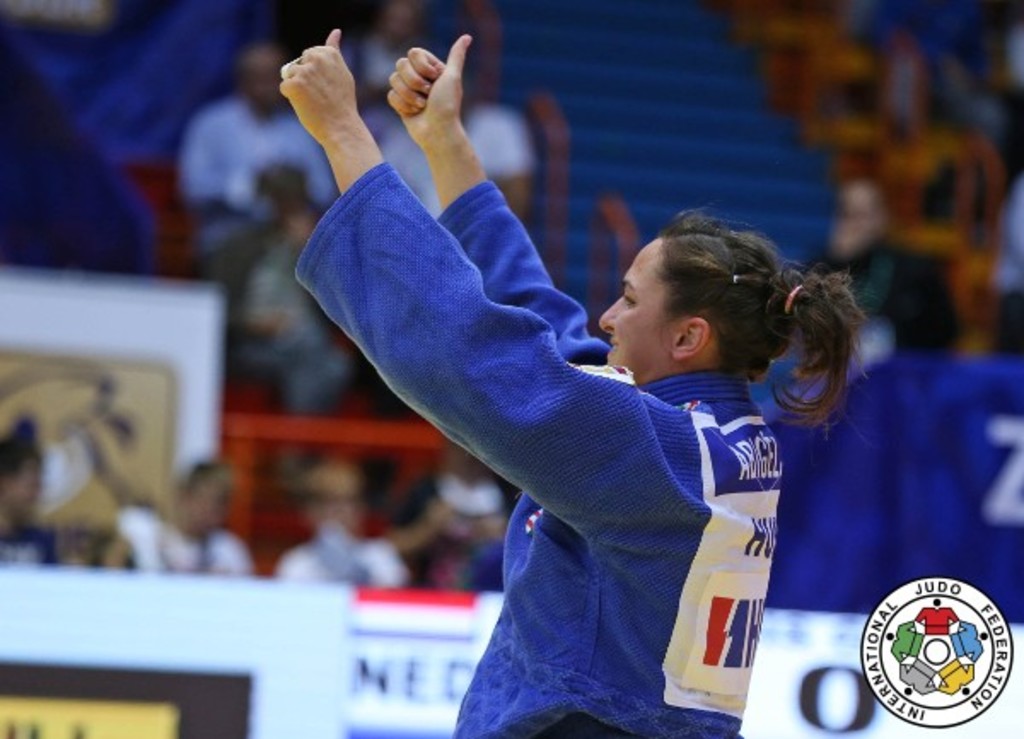 The first bronze medal was won by CAMARA as France’s number three beat Budapest Grand Prix bronze medallist Karen STEVENSON (NED) to grace an IJF medal podium for the first time. CAMARA, who has double Olympic medallist Audrey TCHEUMEO and Samsun Grand Prix winner Madeleine MALONGA ahead of her, scored a waza-ari from a sasae-tsurikomi-ashi and sealed her medal with an osoto-makikomi earning a second and match-winning waza-ari.

The second bronze medal contest was won by former Orenburg European Cup silver medallist Antonina SHMELEVA (RUS) as Junior world champion MATIC could not compete having sustained a pectoral injury in the last second of her last contest. 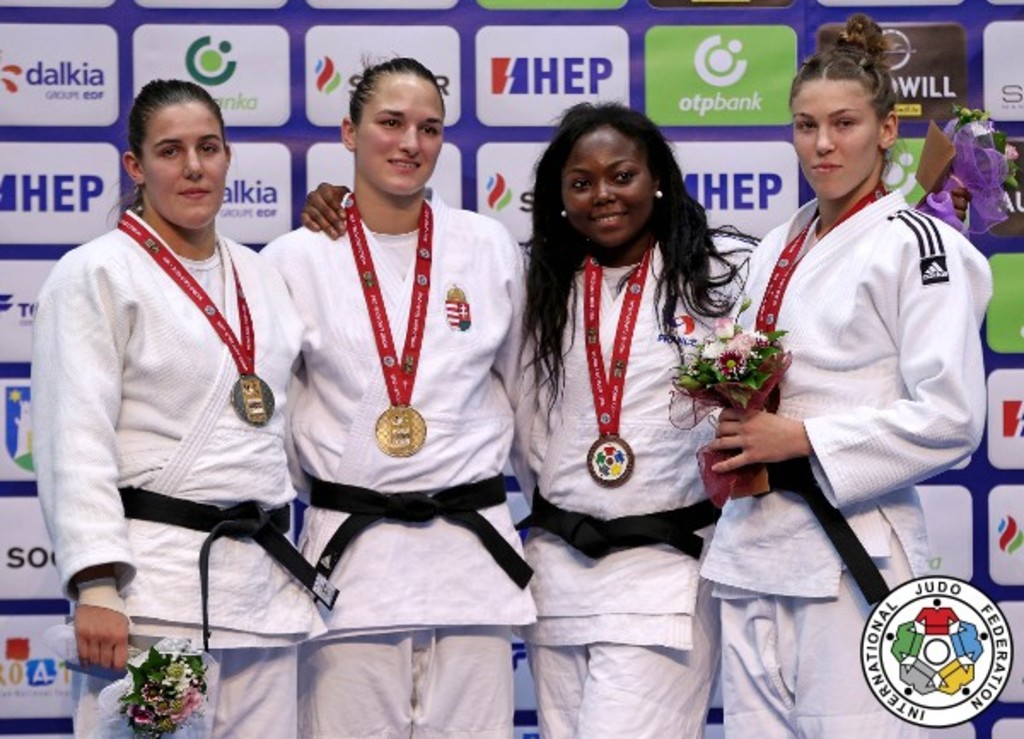 +78kg: Year to remember continues for CERIC and Bosnia-Herzegovina

World Judo Masters bronze medallist Larisa CERIC (BIH) has been prolific in 2016 and her run of IJF World Judo Tour hardware looks no sign of abating as she defeated a very worthy contender in Budapest Grand Prix winner Carolin WEISS (GER) in the +78kg final. Rio 2016 Olympian CERIC scored a yuko from an osoto-makikomi and WEISS could not reply with an attack of any real degree of substance. 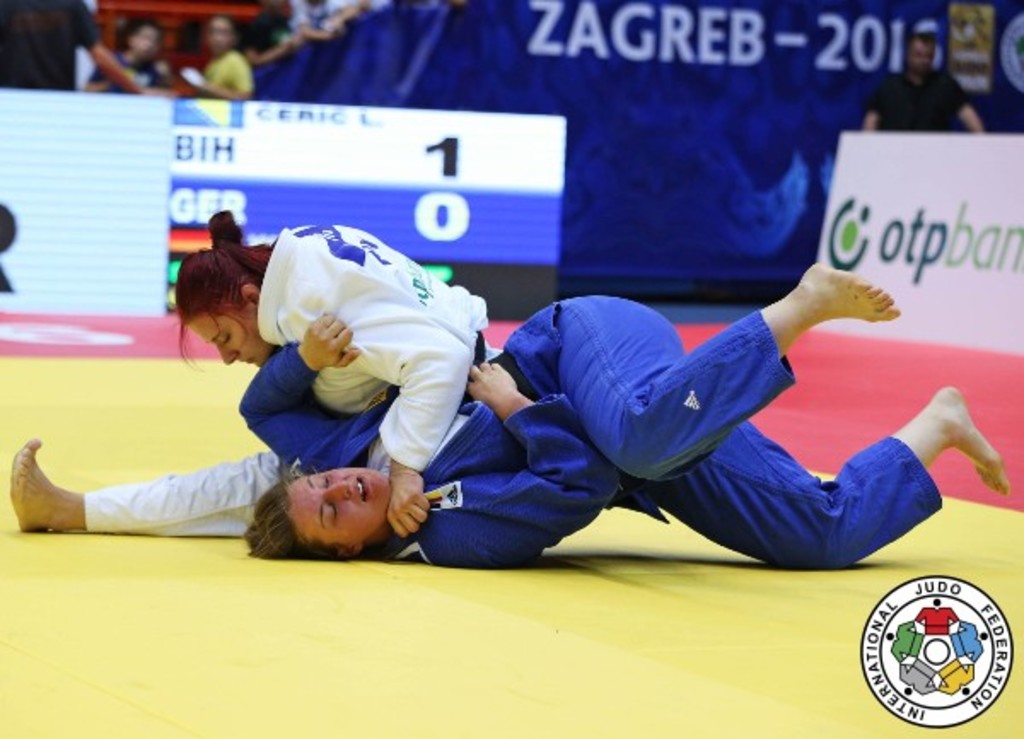 In the first semi-final CERIC defeated Sarajevo European Cup silver medallist Milica ZABIC (SRB) to reach her first Grand Prix final. The red-headed rivals are close friends off the mat but all friendships are on hold when two judoka oppose each other on the tatami and CERIC actually submitted ZABIC with a koshi-jime strangle and then made sure the Serbian heavyweight was ok before they hugged and went their separate ways in the +78kg competition.

In the second semi-final WEISS held down Tallinn European Open bronze medallist Sandra JABLONSKYTE (LTU) for 15 seconds for her second and match-winning waza-ari to setup the anticipated women’s heavyweight final.

The first bronze medal was won by JABLONSKYTE who was too strong for 18-year-old European Youth Olympics Festival bronze medallist SZIGETVARI Mercedesz (HUN). The Lithuanian scored a yuko from a harai-makikomi and moved into the osaekomi for 20 seconds as her Hungarian rival was powerless to stop JABLONSKYTE.

The second bronze medal was won by Dubrovnik European Cup winner Ivana SUTALO (CRO) who defeated ZABIC in just 33 seconds. SUTALO won their only previous meeting and doubled her head-to-head advantage   with a ura-nage after 10 seconds for a yuko score and then the home fighter held down the Serbian with a kesa-gatame for 20 seconds and ippon. 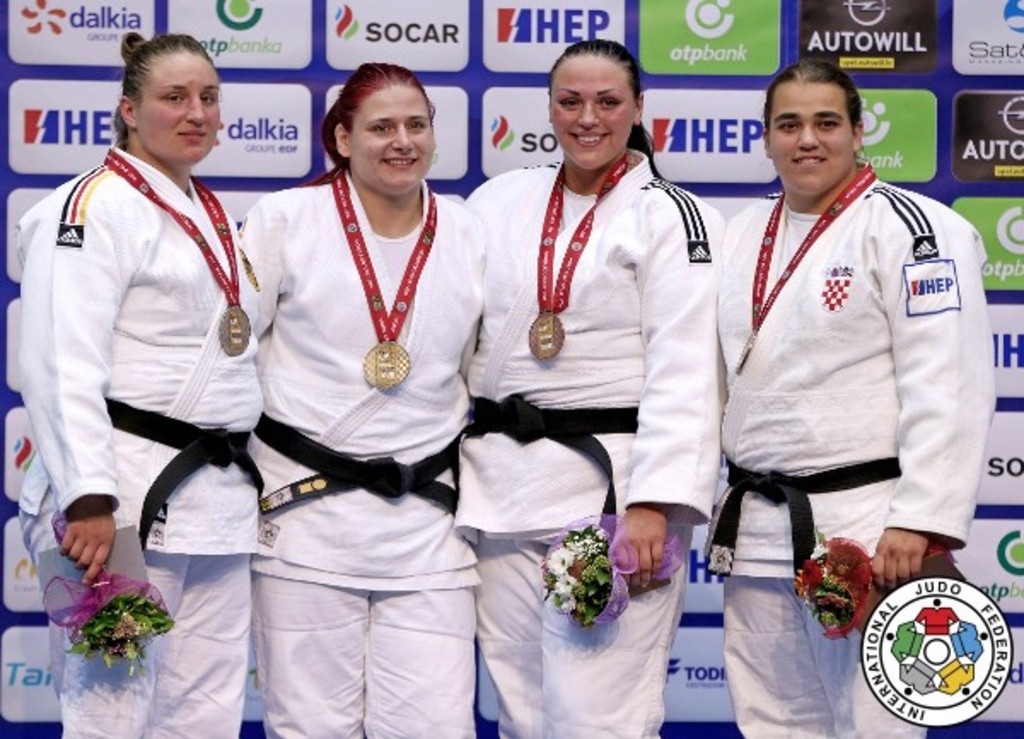 Former Ulaanbaatar Grand Prix winner Alexander GRIGOREV (RUS) clinched his second Grand Prix gold medal by defeating the top seed and Budapest Grand Prix bronze medallist Li KOCHMAN (ISR) in the -90kg final. GRIGOREV was making only his third international start of the year but he looked in good condition. The 21-year-old KOCHMAN is one of Israel’s big hopes for this new cycle and that started well with a silver medal today as GRIGOREV was unstoppable and wrapped up the gold with a thunderous osoto-gari earning ippon having already been in front by a yuko. 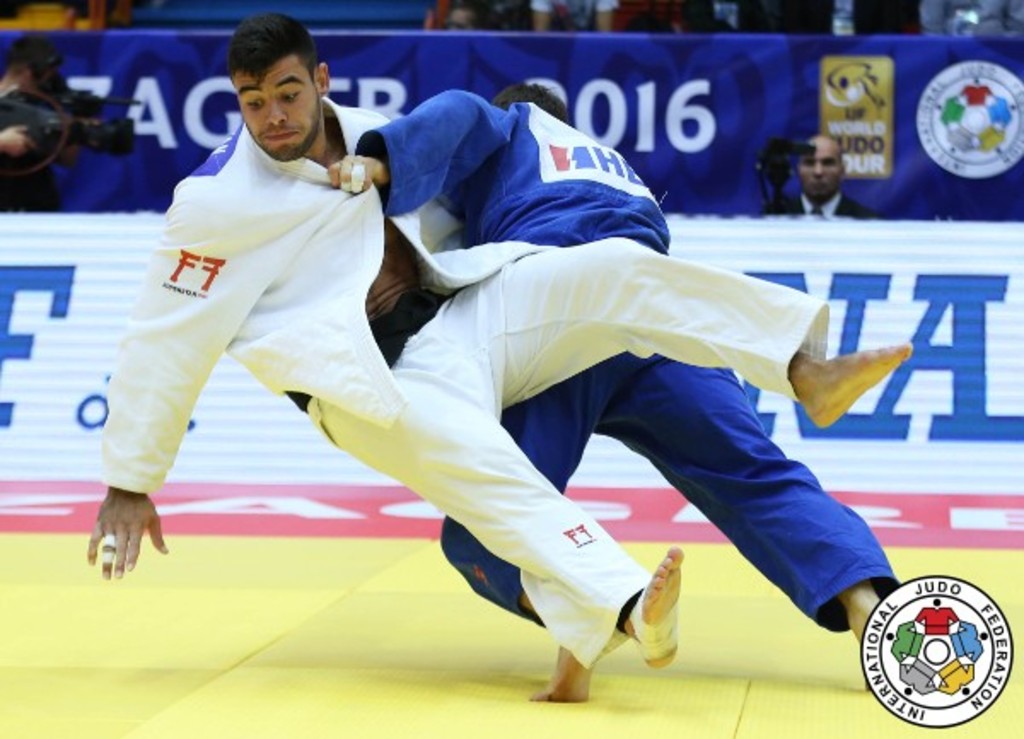 In the first semi-final KOCHMAN edged past Oberwart European Open winner VER Gabor (HUN) by a yuko. The resilient Hungarian blocked repeated pick up attempts from his Israeli opponent but could not threaten the scoreboard as it was KOCHMAN who progressed.

In the second semi-final GRIGOREV defeated European Championships bronze medallist Piotr KUCZERA (POL) with arguably the ippon of the tournament with a sensational counter throw which can be seen of the IJF Facebook page and left fans, judoka and coaches purring in the crowd.

The first bronze medal was awarded to KUCZERA after he bested German European Cup silver medallist Dario KURBJEWEIT GARCIA (GER) inside three minutes as he went ahead with a waza-ari from a ko-soto-gake and followed up on the ground with a juji-gatame to force his opponent to submit.

The second bronze medal went to former Junior European silver medallist Max STEWART (GBR) who defeated VER to win his first IJF World Judo Tour medal and his country’s third bronze medal in Zagreb. STEWART, who was coached his father and Seoul 1988 Olympic bronze medallist Dennis STEWART, hooked the inside left leg of VER for a modified uchi-mata for a superb ippon and the 23-year-old – who moved up two weight categories in the last Olympic cycle – looks to have found his ideal weight category. 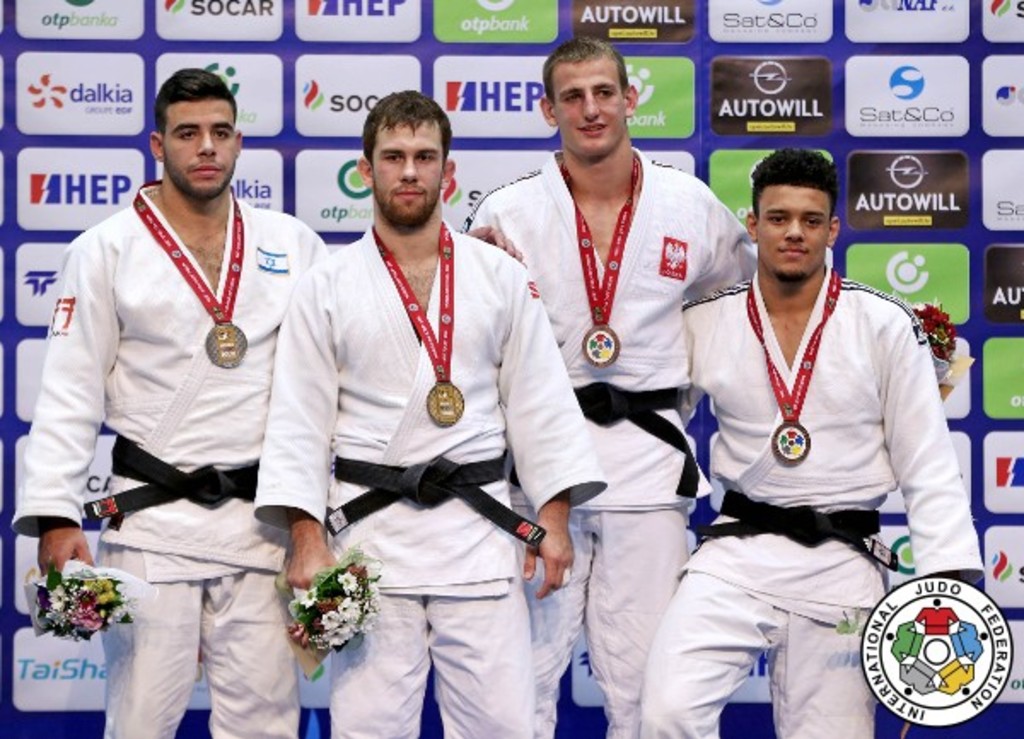 Tyumen Grand Slam silver medallist Adlan BISULTANOV (RUS) was a leading performer in Zagreb as he defeated Budapest Grand Prix winner Michael KORREL (NED) to win his third Grand Prix gold medal. KORREL could not make it two back-to-back Grand Prix gold medals as he was on the receiving end of a drop seoi-nage which was worth a waza-ari score and was caught with a ko-uchi-gari for a yuko with a minute remaining. 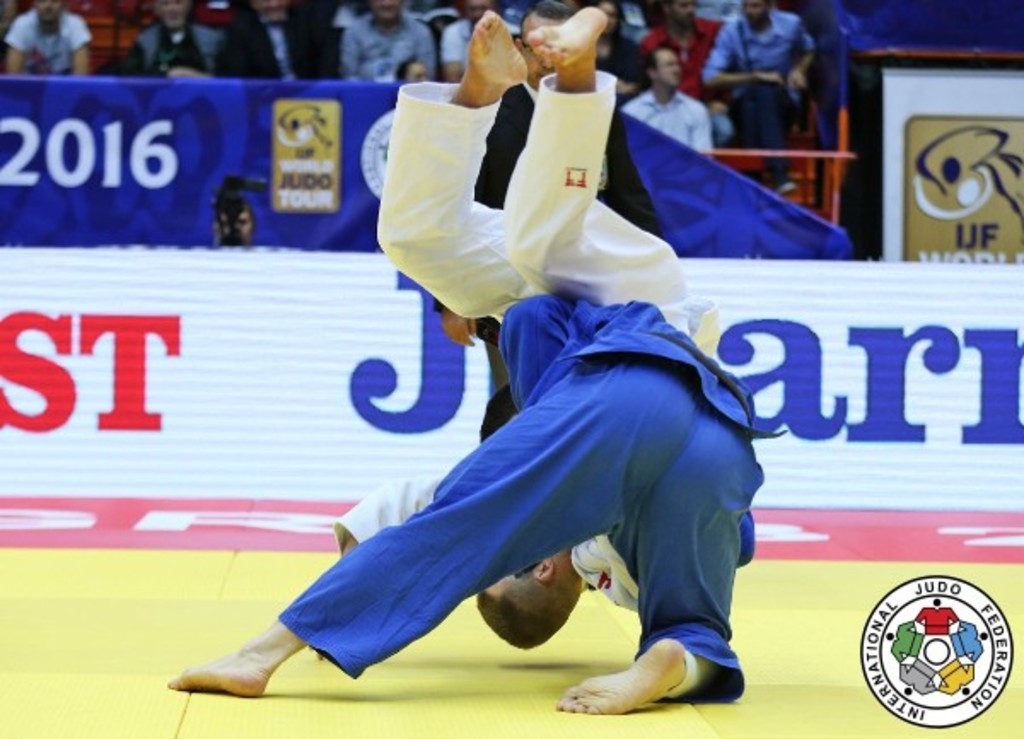 BISULTANOV said: “With regard to Rio, I was absolutely ready but did not get the selection and I have no hard feelings because I was confident that Tagir KHAIBULAEV could win. KHAIBULAEV picked up a shoulder injury in Rio de Janeiro but we still all felt confident that he could do it. I was with the team in Rio as a training partner.

“Today I felt ready for the competition, I was happy with all of my fights but what made me happiest was when I was in the warm-up area before my final and I heard the awarding ceremony for -90kg and the Russian anthem played which inspired me.” 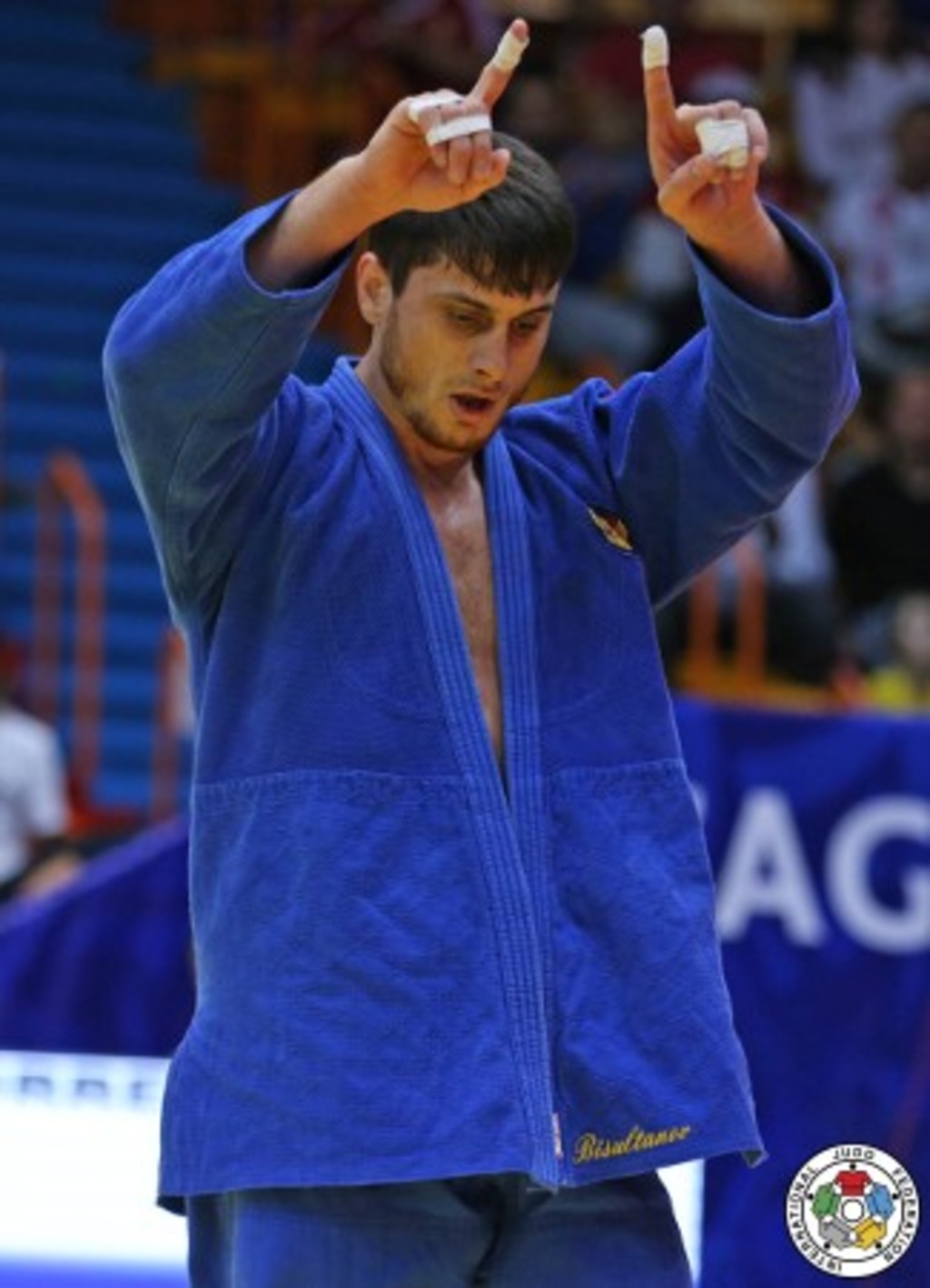 In the first semi-final KORREL saw off DVARBY by a waza-ari score in a nervy contest where both men had their share of scoring opportunities. In the second semi-final OHAT tried to put his hand down to block a hiza-guruma from BISULTANOV but the Hungarian hurt his shoulder in the process and was unable to continue.

The first bronze medal was won by 21-year-old Tallinn European Open bronze medallist Laurin BOEHLER (AUT) as OHAT could not come out to compete having injured his shoulder in his last contest. BOEHLER had never been in an IJF medal contest before and will fight for medals at this level in the future the Austrian Judo Federation will believe.

The second bronze medal was won by DVARBY who defeated former Moscow Grand Slam bronze medallist Milan RANDL (SVK) after two and a half minutes of golden score with a seoi-nage earning a waza-ari score. RANDL was a spent force in golden score while DVARBY pressured the Slovakian until the score came to seal a memorable debut at -100kg having moved up from -90kg. 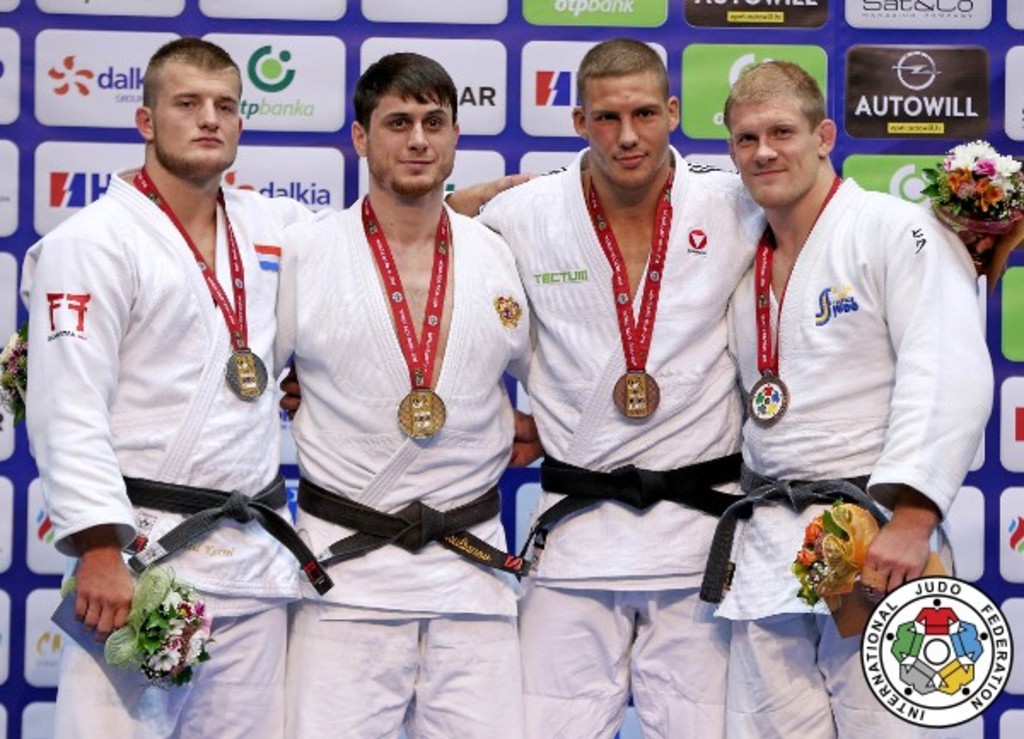 World Judo Masters winner Daniel NATEA (ROU) won his first Grand Prix with a heavyweight ippon in the last contest of the Zagreb Grand Prix 2016 as he bided his time before launching former Ulaanbaatar Grand Prix silver medallist Sven HEINLE (GER) for a spectacular ippon. The men’s heavyweight final matched one of the biggest judoka in the category against one of the shortest and NATEA, who had eye-catching black tape on all of his fingers and thumbs, exploded into an o-guruma as HEINLE was floored with a minute left on the clock. 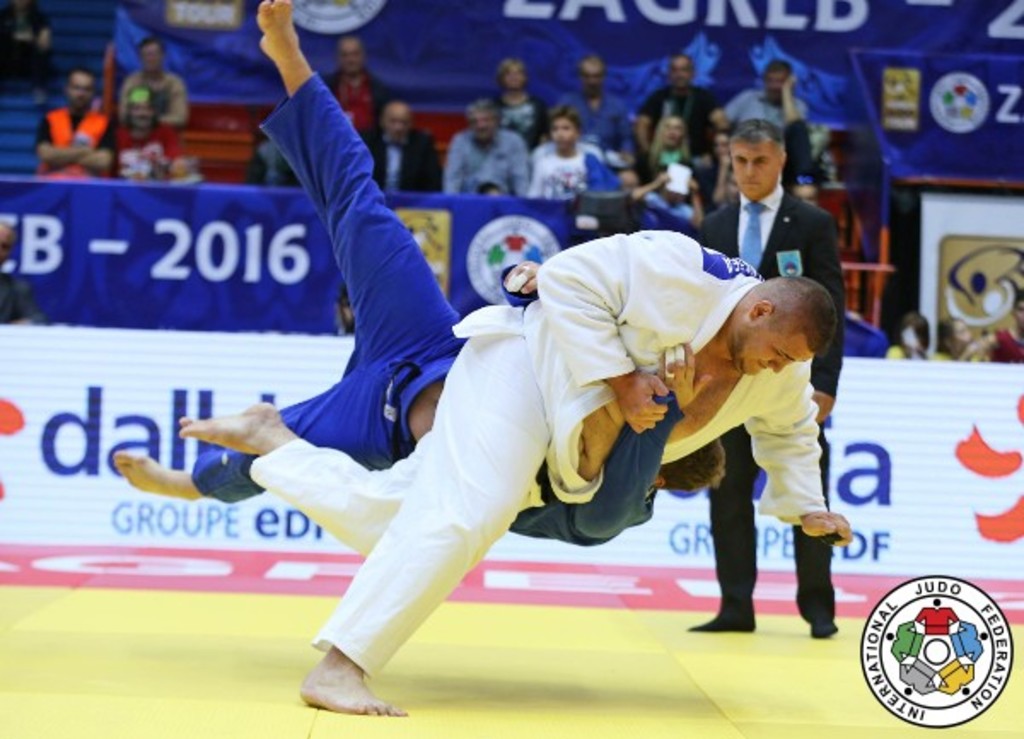 In the first semi-final NATEA shaded former Glasgow European Open winner Benjamin HARMEGNIES (BEL) by the smallest margin of a yuko score to take his expected spot in the men’s heavyweight final.

In the second semi-final Budapest Grand Prix winner Stanislav BONDARENKO (UKR) fell to HEINLE on shidos 2:1 in a scoreless contest.

The first bronze medal went to BONDARENKO who dominated Sarajevo European Cup winner Vito DRAGIC (SLO). The Ukrainian opened his account with a soft uchi-mata for a yuko score and added a waza-ari from the same technique before holding down the Slovenian for 15 seconds with a kesa-gatame to win by waza-ari awasette-ippon.

The second bronze medal went to a newcomer to the IJF medal podium as HARMEGNIES defeated 23-year-old Hamza OUCHANI (FRA) in a one-sided contest. HARMEGNIES opened the scoring with a harai-makikomi on the edge of the mat for a waza-ari and turned in a ushiro-kesa-gatame hold for 15 seconds and a new personal best. 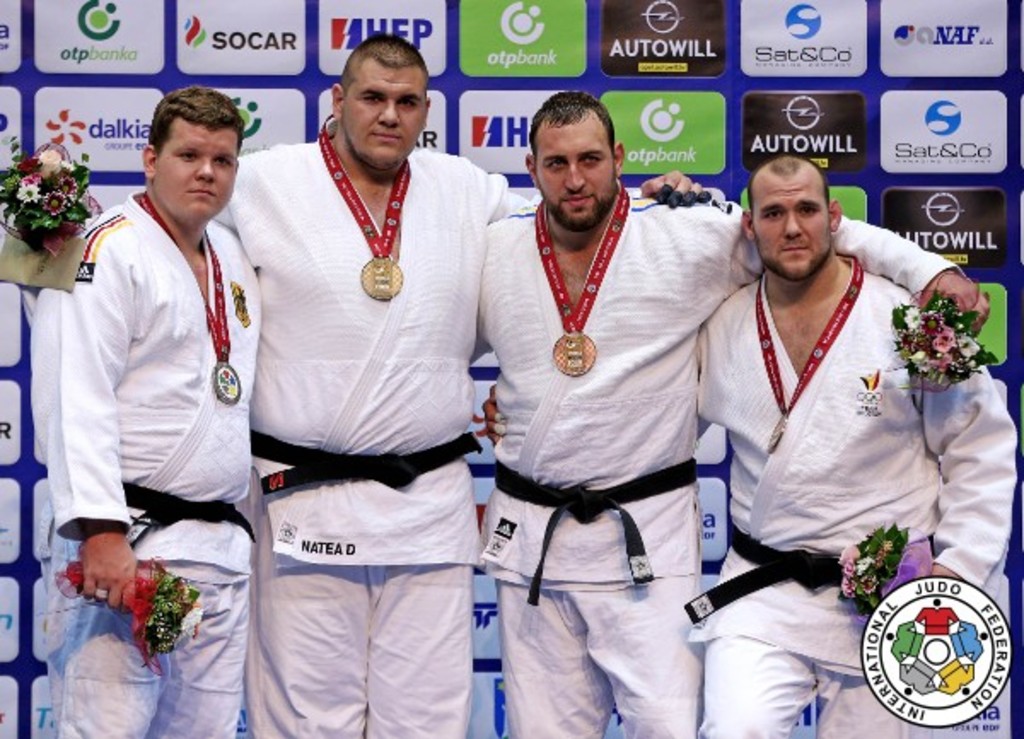