The Tashkent Grand Prix 2016, the second IJF Grand Prix following the Rio 2016 Olympic Games and penultimate Grand Prix of the year, came to a rip-roaring conclusion on Saturday as the heavyweights had their chance to shine in Uzbekistan.

The three-day Grand Prix showcased the women’s -78kg and +78kg categories and the men’s -90kg, -100kg and +100kg categories on the last day of competition.

Hosts Uzbekistan, who fielded 55 judoka from a possible from 56 after suffering a late injury in the build-up to their flagship judo event, were engaged in the final block on all three days and were in the medal hunt in every weight category. 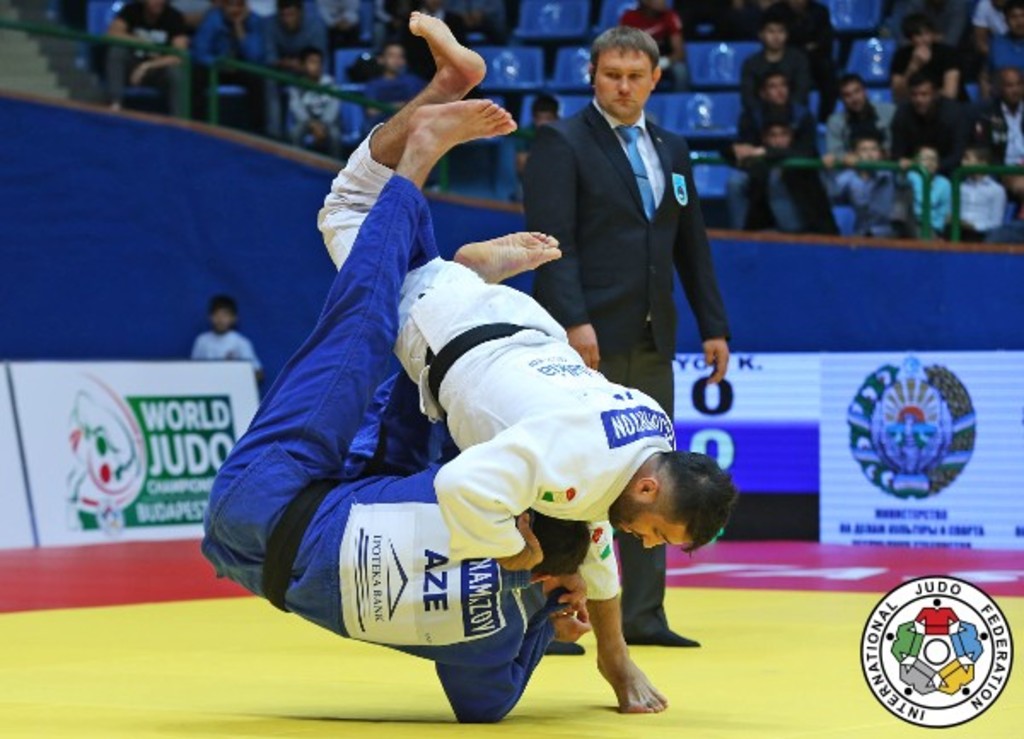 The judo-loving nation finished out of sight at the top of the medal table with a phenomenal return of six gold medals, three silver medals and 11 bronze medals. Most crucially for the hosts, their golden haul included -70kg winner Gulnoza MATNIYAZOVA (UZB) who become the first Uzbek woman to win IJF World Judo Tour gold when she triumphed on Friday. 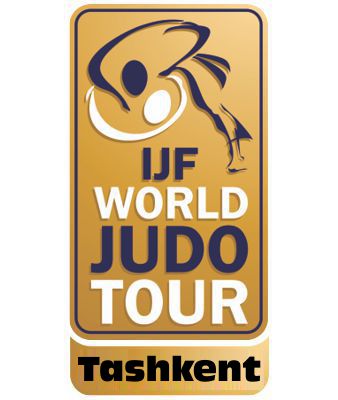 Tashkent’s fourth annual instalment of Grand Prix action will be remembered for that historic feat from MATNIYAZOVA as well as their incredible strength and depth in both their men’s and women’s squads who could be their strongest ever by the time of the next Olympiad in Tokyo. Judo has a special place in the hearts of Uzbek people and that was evident from Thursday morning when the competition started, through until Saturday night.

The passion, pride and warmth of the hosts provided a platform for a successful Grand Prix which will continue to be a key leg on the IJF World Judo Tour.

Judo’s elite will now prepare for the Middle East and the Abu Dhabi Grand Slam, the fourth Grand Slam of the season following Paris (FRA), Baku (AZE) and Tyumen (RUS), which will take place from Friday 28 – Sunday 30 October. Over 200 judoka from 35 nations will make the trip to the U.A.E with a host of Rio 2016 Olympic medallists set to return to IJF World Judo Tour action.

Watch #JudoAbuDhabi2016, the last but one Grand Slam of the IJF World Judo Tour 2016, live at www.ippon.tv ;

-78kg: Joy for JOO who makes it one from one for Hungary

Zagreb Grand Prix winner JOO Abigel (HUN) came from behind in the -78kg final to defeat Almaty Grand Prix silver medallist Albina AMANGELDIYEVA (KAZ). JOO was one of the strongest and highest profile judoka in Tashkent but surprisingly fell behind to world number 39 AMANGELDIYEVA. The Kazakh fighter led with a yuko from a tani-otoshi before JOO scored a waza-ari with an uchi-mata and remained in front for the remainder of the contest to win back-to-back Grand Prix. Hungary’s only judoka gave their country an 100% record as their only representative in Uzbekistan. 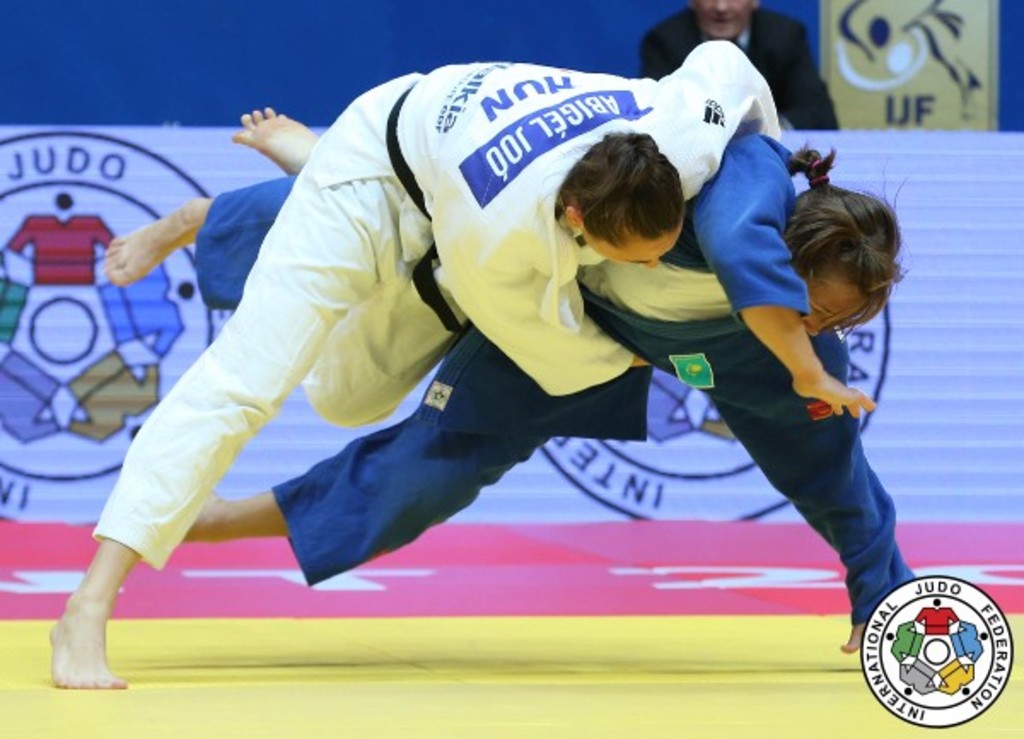 In the first semi-final two-time Olympian JOO Abigel (HUN) defeated world number 76 Zarina RAIFOVA (KAZ) after just 15 seconds by ippon from an uchi-mata. In the second semi-final AMANGELDIYEVA bested 21-year-old Kumush YULDASHOVA (UZB) by a yuko in a tight contest.

The first bronze medal was won by YULDASHOVA who saw off 18-year-old Junior Asian Championships silver medallist Nodira YULDASHEVA (UZB). YULDASHOVA scored a yuko from a determined sacrifice throw and added a waza-ari from a kesa-gatame to beat the clock and capture a place on the podium.

The second bronze medal contest was won by RAIFOVA who dispatched 17-year-old cadet Dilnoza KAMOLOVA (UZB). Uzbekistan’s KAMOLOVA, who was one of the youngest judoka in the competition, was caught with an osoto-gari for a yuko and was trapped in a modified sankaku-gatame hold for 20 seconds and for ippon. 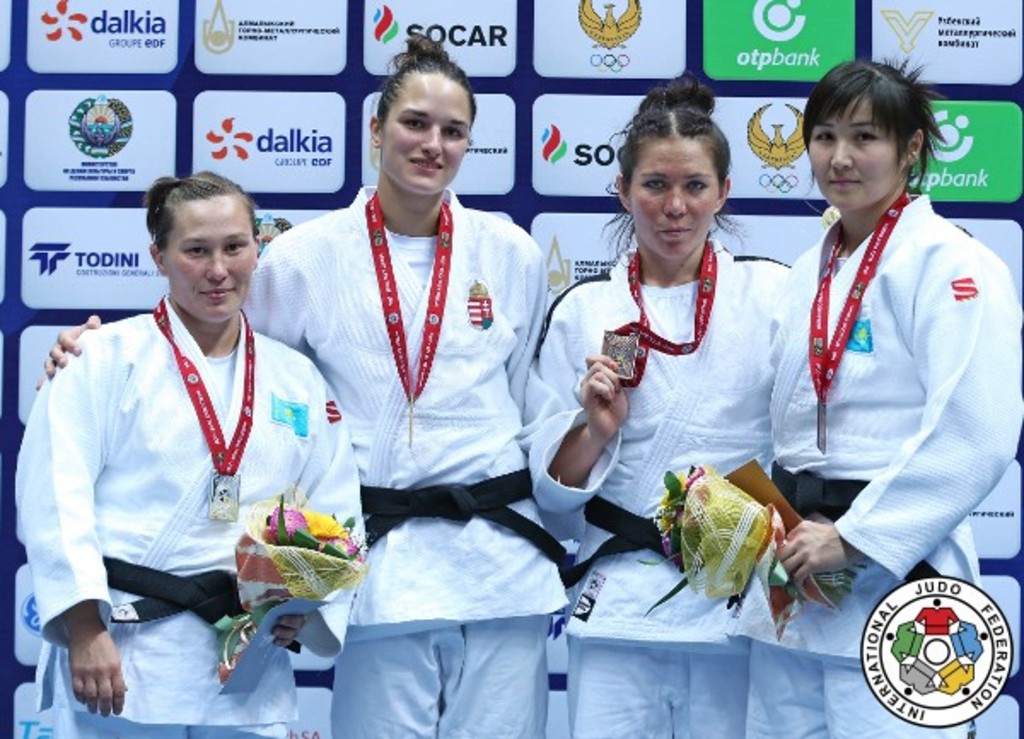 Asian Championships silver medallist Gulzhan ISSANOVA (KAZ) won her third Grand Prix title with a victory over Tbilisi Grand Prix bronze medallist Maryna SLUTSKAYA (BLR). The duo were even in the head-to-head series coming into the contest with one win apiece and it was the veteran ISSANOVA who moved ahead with a nail-biting win on shido penalties 1:2 after a misfiring SLUTSKAYA was twice penalised for passivity while the winner was only penalised once for the same indiscretion. The 33-year-old, who missed out on a place at Rio 2016, may decide to end on a high or with this win and points windfall could target one more World Championships experience with a record $1 million in prize money to be shared among the medallists in Budapest next year. 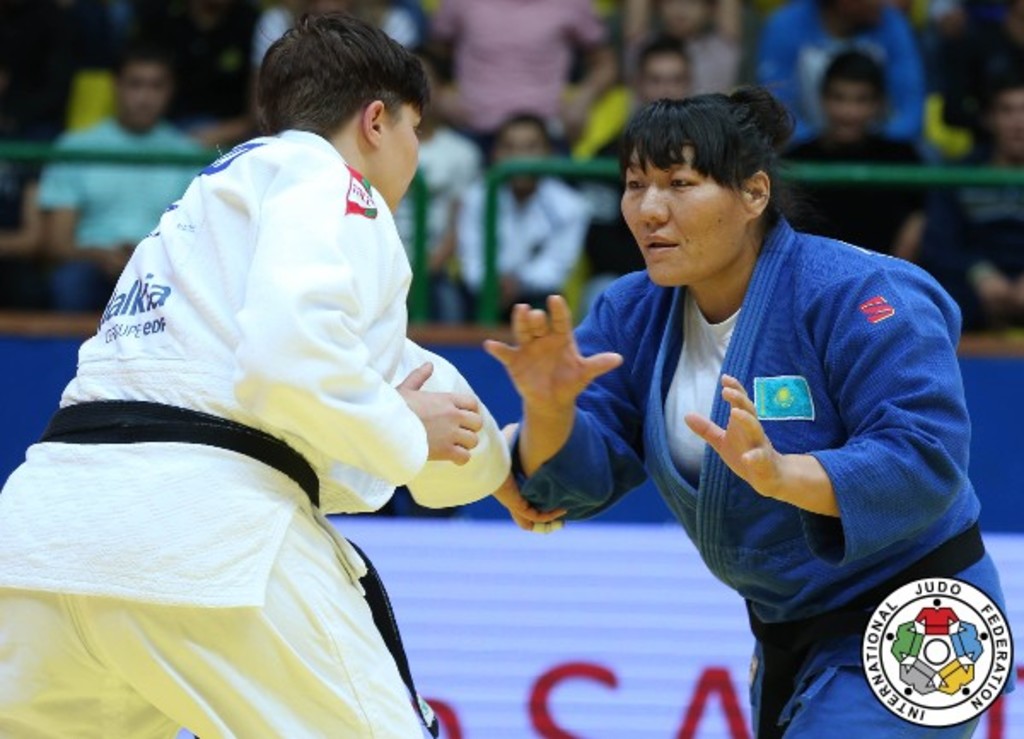 In the first semi-final SLUTSKAYA registered a full house of scores against 20-year-old Junior Asian Championships bronze medallist Rahima YULDOSHOVA (UZB). The Belarus judoka improved with every score as an opening yuko was followed by a waza-ari and then ippon to secure a spot in the gold medal contest.

In the second semi-final ISSANOVA confidently held down Orenburg European Cup winner Daria KARPOVA (RUS) in osaekomi for 20 seconds and ippon. ISSANOVA used a ushiro-kesa-gatame to pin down the Russian fighter to advance to the final.

The first bronze medal was won by KARPOVA who won her first clash against 18-year-old Grand Prix debutant Gulnoza AZIMOVA (UZB) by ippon from a juji-gatame after 28 seconds.

The second bronze medal was won by world-ranked YULDOSHOVA over young heavyweight Saneayim ERKINBAEVA (UZB). YULDOSHOVA and ERKINBAEVA, who were opposed against each other for the first time on the IJF World Judo Tour, could not be separated after four minutes of relative inaction and needed an additional 72 seconds to decide who would represent Uzbekistan on the women’s heavyweight podium. YULDOSHOVA submitted her teammate with a juji-gatame for an invaluable win as she plots a run of international assignments for her country. 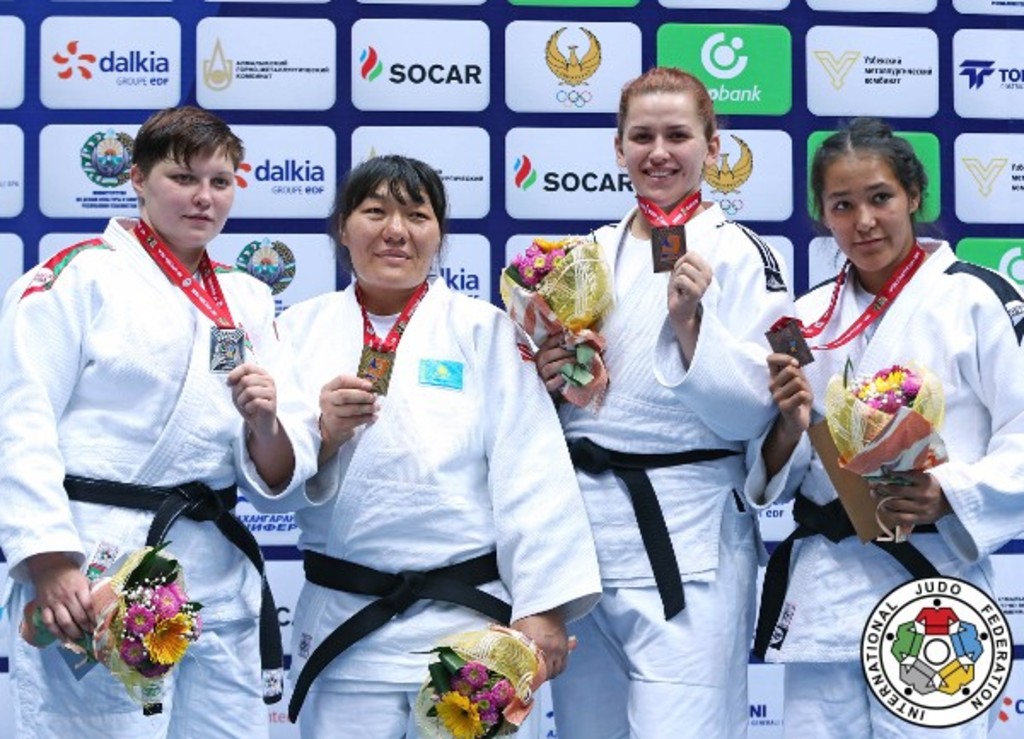 Former Paris Grand Slam winner Yakhyo IMAMOV (UZB) delivered gold on only his second competition in his new weight category as he beat former Minsk World Cup bronze medallist Davronbek SATTOROV (UZB) for gold. The 26-year-old IMAMOV debuted at -90kg at the Budapest Grand Prix this summer and was eliminated in round two. The former -81kg judoka received a shido for not taking a grip, as did his opponent, and they remained level and scoreless after five minutes.

After SATTOROV received medical treatment off the tatami for a finger laceration, IMAMOV made a desperate attack which was enough for a yuko score and gold. 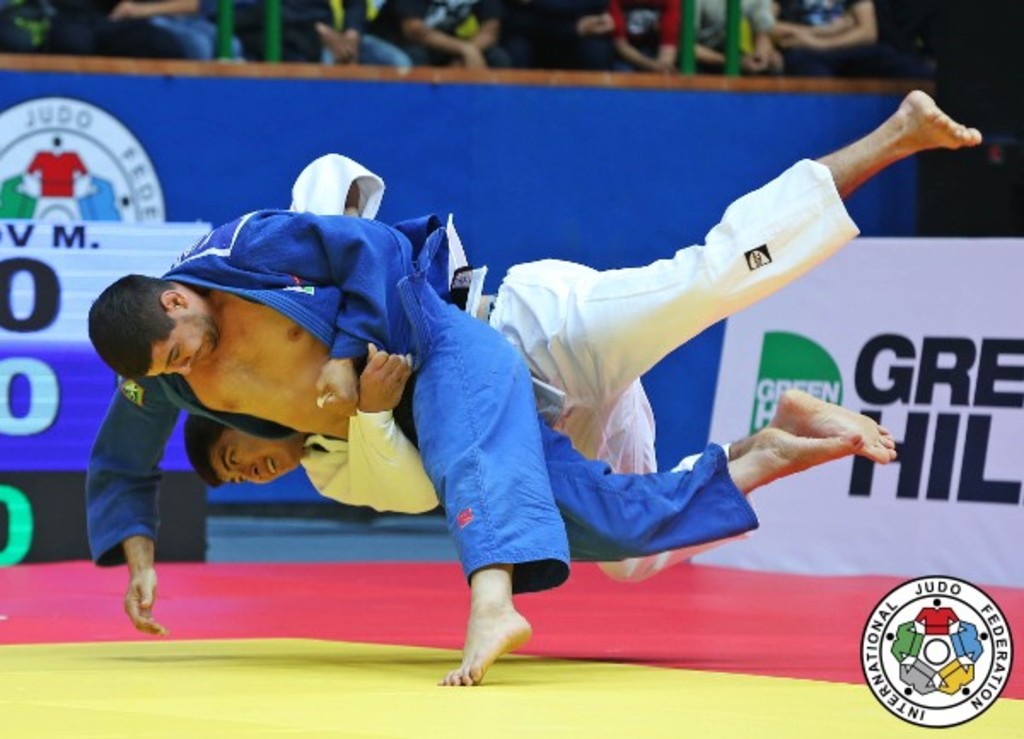 In the first semi-final Asian Championships winner Komronshokh USTOPIRIYON (TJK) was humbled by Davronbek SATTOROV in a dramatic contest which was settled in the final seconds. A yuko with nine seconds remaining handed the Uzbek judoka the win and his first Grand Prix final after a competitive contest which was lapped up by the crowd.

In the second semi-final 19-year-old Junior Asian Championships winner Mukhammadkarim KHURRAMOV (UZB) lost out to IMAMOV by a yuko from a seoi-nage as it was the seasoned international who pipped the youngster to the final.

The first bronze medal was awarded to home judoka KHURRAMOV who defeated 21-year-old Meirambek ZHANGABAY (KAZ) in the opening contest of the final block on day in Tashkent. Both judoka were aiming to win their first IJF medal hardware and that honour went to the Uzbek starlet who prevailed on shido penalties 2:3 to resume the medal flow for the hosts at the first opportunity.

The second bronze medal went to world number 29 Magomed MAGOMEDOV (RUS) who won a scoreless contest against world number 13 USTOPIRIYON. It was the latter, who was financially supported to attend qualification events for the Rio 2016 Olympic Games by the International Judo Federation, who came closest to scoring with his favoured uchi-mata which was also on show in the previous rounds. MAGOMEDOV earned the win and a vital medal on shido penalties 2:3 as he closed in on the world’s top 20 on the world ranking list. 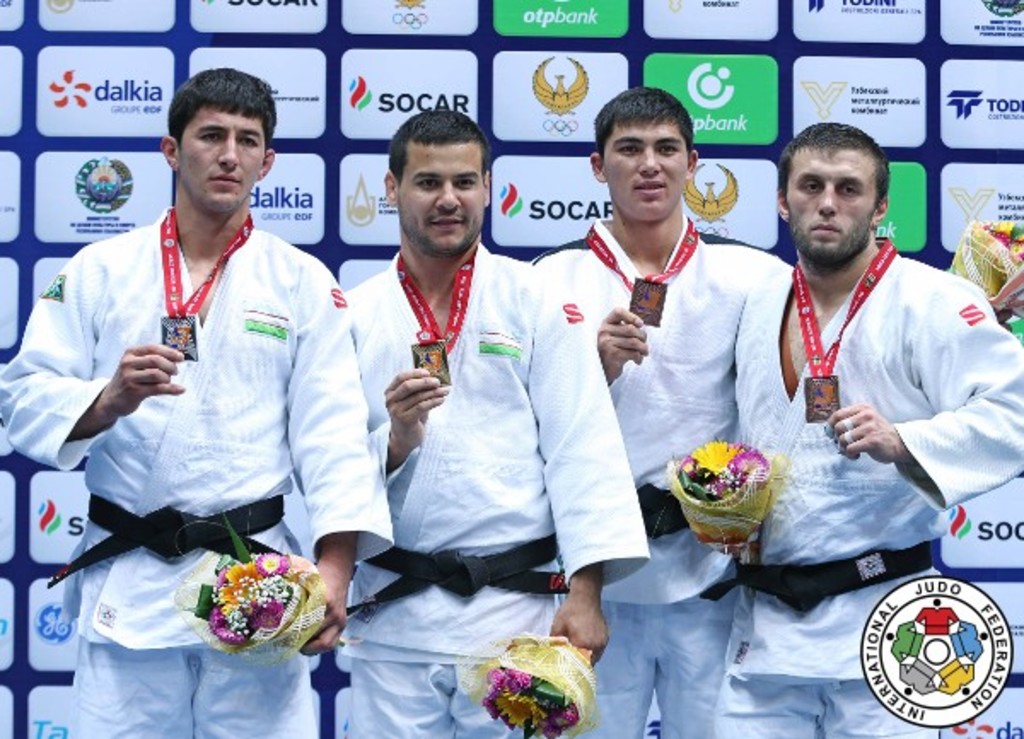 Budapest Grand Prix silver medallist Soyib KURBONOV (UZB) went unbeaten on the final day in Tashkent to be crowned -100kg gold medallist as he defeated Madrid European Open bronze medallist Jalil SHUKUROV (AZE) in the final. The Uzbek had won their one and only previous meeting and that outcome was the same today as the world number 25 prevailed 2:3 on shido penalties. Both judoka had two shidos to their names with 10 seconds left and golden score loomed until the Azeri was penalised for a cross-grip and had to rue that grave error which settled the fate of the gold and silver medals. 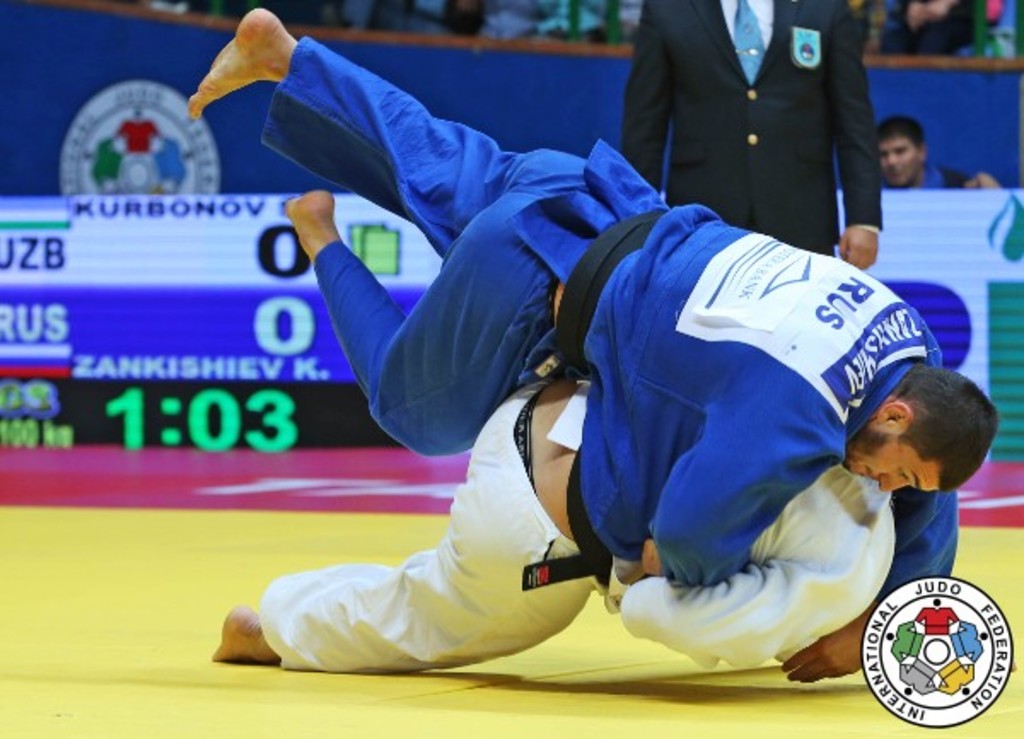 In the first semi-final KURBONOV defeated Tyumen Grand Slam bronze medallist Kazbek ZANKISHIEV (RUS) after 68 seconds of golden score with a yuko from a makikomi attack. In the second semi-final former Asian Championships bronze medallist Saidzhalol SAIDOV (TJK) succumbed to SHUKUROV by ippon after 10 seconds from a tai-otoshi.

The second bronze medal was won by former Ulaanbaatar Grand Prix bronze medallist Erkin DONIYOROV (UZB) who countered the ashi-waza attack of ZANKISHIEV for a waza-ari and the home judoka landed on top of his opponent and remained there for 15 seconds in osaekomi to win by waza-ari awasette-ippon. Asian Championships bronze medallist Yerzhan SHYNKEYEV (KAZ) won his first Grand Prix gold medal as he defeated Tyumen Grand Slam winner Andrey VOLKOV (RUS) to clinch the men’s heavyweight title in the last contest of the Tashkent Grand Prix 2016. Both judoka had the appealing incentive of a first Grand Prix gold medal and SHYNKEYEV conjured up the best moment of the contest as he scored a yuko with an uchi-mata after the halfway point of the contest. 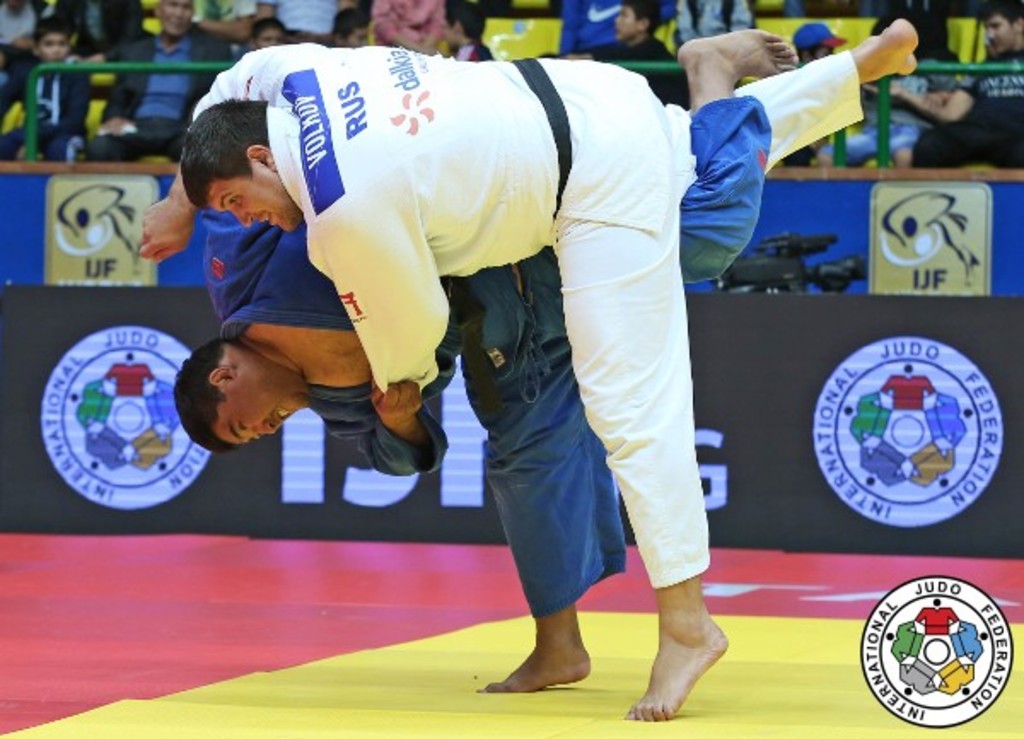 In the first semi-final VOLKOV bested Talllinn European Open winner Aliaksandr VAKHAVIAK (BLR) with a juji-gatame while the second semi-final was a battle of Asian Championships bronze medallists in Iurii KRAKOVETSKII (KGZ) and Yerzhan SHYNKEYEV (KAZ). The Kazakh judoka scored a yuko and a waza-ari without reply to topple his opponent.

The first bronze medal went to former Tashkent Grand Prix silver medallist Boltoboy BALTAEV (UZB) who defeated world number 21 KRAKOVETSKII. World number 77 BALTAEV won 1:2 on shidos as KRAKOVETSKII never got into his stride at the Uzbekistan Sport Complex despite a more than respectable showing at the Olympic Games.

The second bronze medal went to world number 55 VAKHAVIAK who thwarted 25-year-old Shukhrat TUROBOEV (UZB). Belarus’ heavyweight trapped his unranked opponent with a mune-gatame for 20 seconds and ippon to claim the second Grand Prix medal of his late-blooming career.