The homecoming for TOMA in Abu Dhabi did not disappointed as he fought for the first time since Rio 2016 and was in fine form.

Mr. Marius VIZER, IJF President, recognised the landmark achievement for the hosts and praised their continued success on the IJF World Judo Tour. 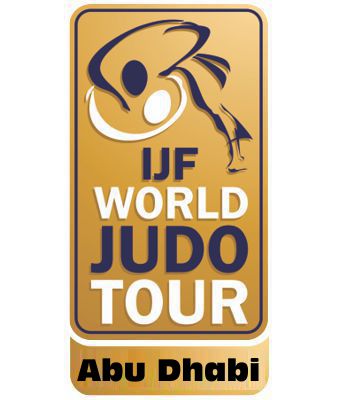 “I see today’s result as confirmation of the U.A.E.’s Olympic medal. I believe it is a good promotion for judo here and in the Gulf region and a model for developing judo nations as the U.A.E have been successful in promoting the sport and its values in addition to being successful at the elite level.”

Mr. Naser AL-TAMEEMI, U.A.E Wrestling, Judo and Kickboxing Federation General Secretary, said: “This result continues what we achieved at Rio 2016 and the two medals today are a great reward for us. We are now attracting a new generation of young judoka which bodes well for the future.

“TOMA felt great pressure fighting here after the Olympics and he is already looking ahead to more challenges and winning more medals for the U.A.E. Thanks to our Olympic medal judo has been in the news, in the headlines and more and more people are talking about the sport here. There was a lot of public support already here for our athletes and now our goal is to make judo the top sport in the Emirates.”

The Abu Dhabi Grand Slam 2016 will conclude on Sunday with the heavyweights as the men’s -90kg, -100kg and +100kg categories will take to the two tatami in addition to the women’s -78kg and +78kg categories. 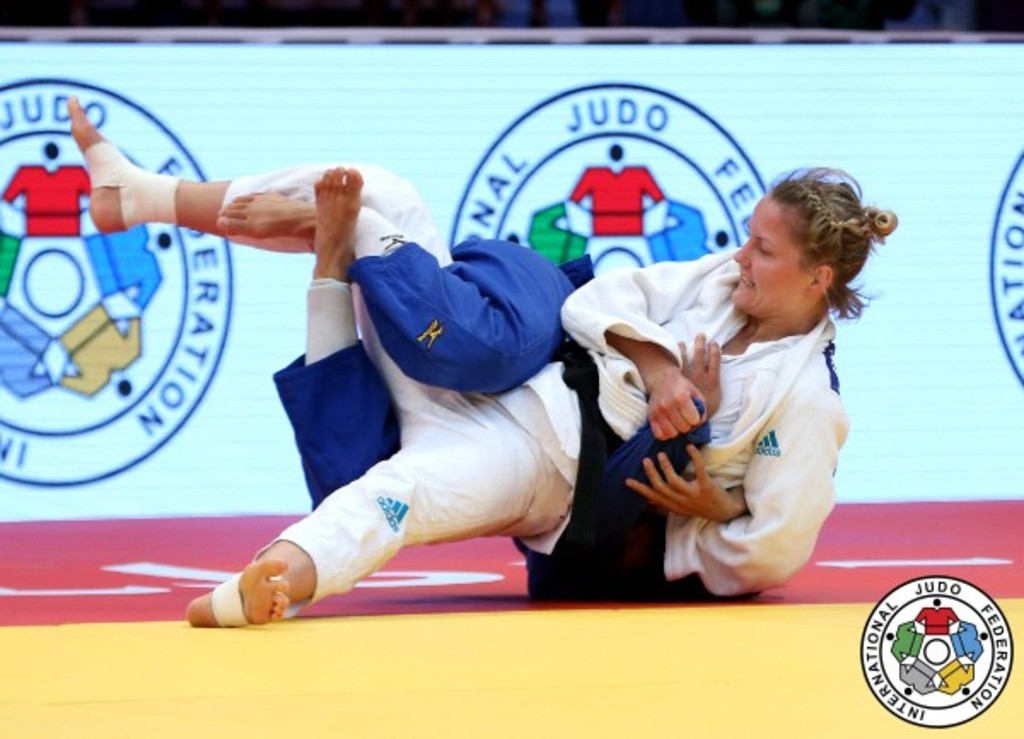 In the first semi-final UNTERWURZACHER bested Almaty Grand Prix winner Margaux PINOT (FRA) by a single shido in a scoreless contest as the top seed safely progressed into the gold medal contest. In the second semi-final FRANSSEN defeated Rio 2016 Olympian Mariana SILVA (BRA). FRANSSEN, who was left at home during Rio 2016 in favour of eventual Olympic bronze medallist Anicka VAN EMDEN (NED), beat SILVA who was unable to assert herself in the contest. The Brazilian finished fifth at her home Olympics and was undone today by two scores from FRANSSEN who made sure of a spot in the gold medal contest by ippon.

The first bronze medal was won by SILVA as she defeated Tashkent Grand Prix silver medallist Marijana MISKOVIC HASANBEGOVIC (CRO) in the opening contest of the final block on day two in Abu Dhabi. The Brazilian made a poor start as she was penalised twice for cross-gripping without immediately attacking. MISKOVIC HASANBEGOVIC was unable to muster any scoring opportunities and was caught for a yuko which turned out to be the only score after four minutes. The second bronze medal was won by Beijing 2008 Olympic bronze medallist Ketleyn QUADROS (BRA) to match the result of her teammate. QUADROS, 29, scored a yuko with a left-sided drop seoi-nage on the edge of the area to defeat PINOT who failed to threaten the scoreboard during any stage of the four minute contest. 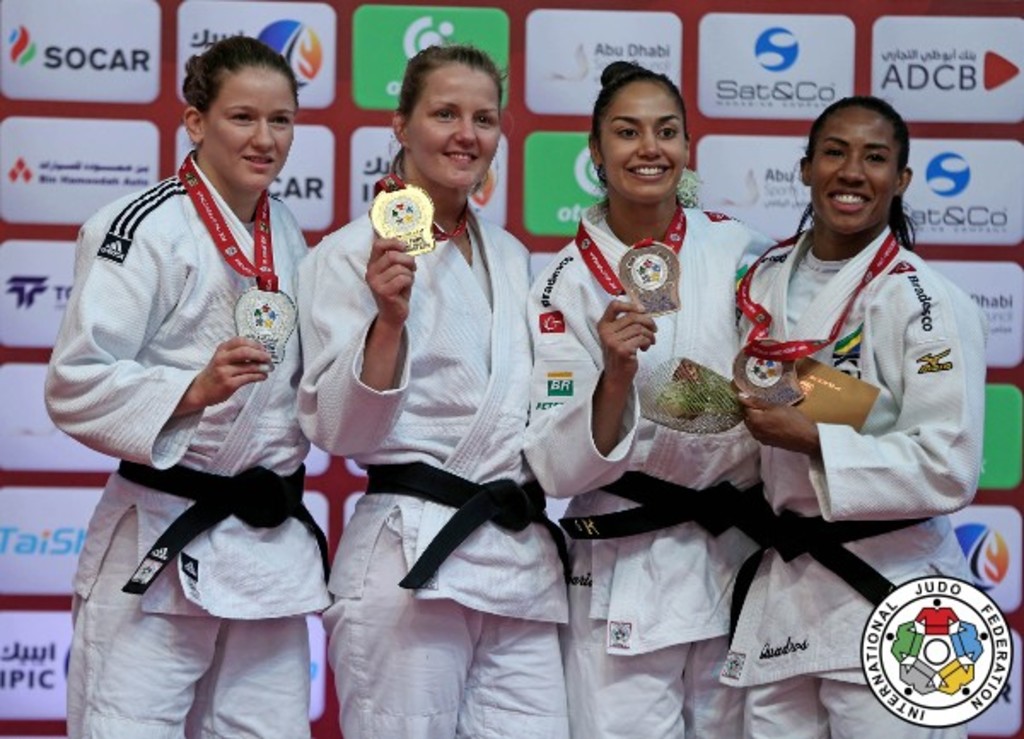 -70kg: France’s top teenager GAHIE is here to stay at the elite level

Junior European champion Marie Eve GAHIE (FRA) became the youngest French woman to win Grand Slam gold as the teenager defeated Baku Grand Slam silver medallist Maria PORTELA (BRA) for the top prize in the -70kg category. GAHIE, who turns 20 in November, absorbed the power of her opponent and her lack of experience was not a factor as the fearless Frenchwoman was light on her feet and positive throughout the final. A shido for PORTELA turned out to be the deciding factor as PORTELA was the only judoka penalised in the four minute gold medal contest (for a negative posture) as both judoka failed to produce a score in a close contest. 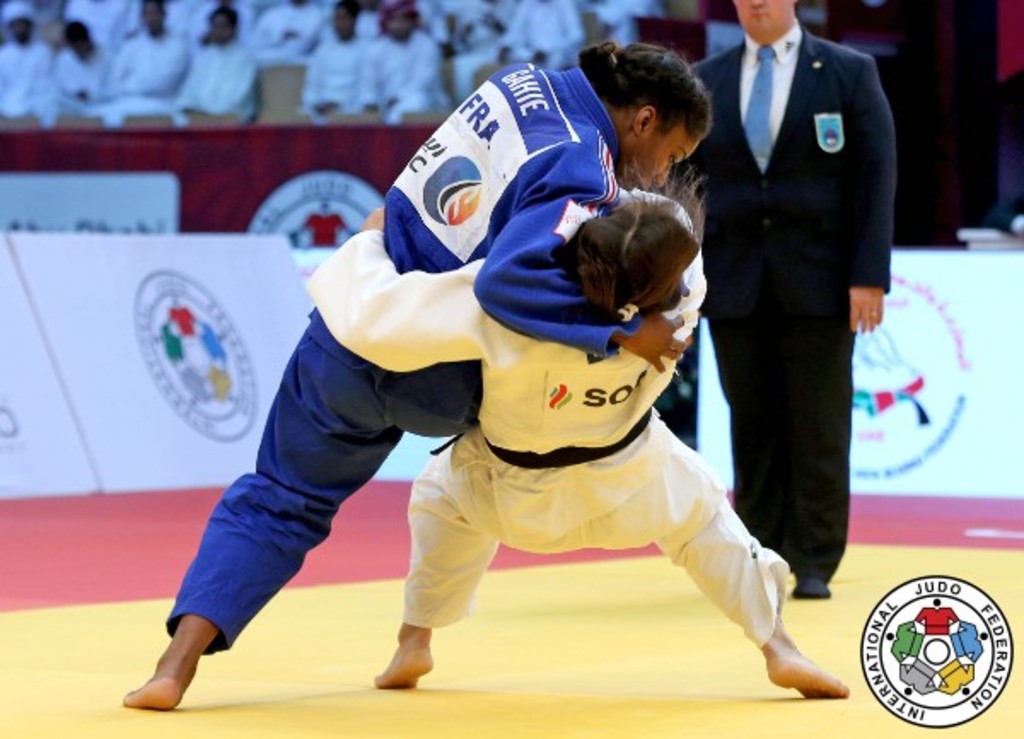 In the first semi-final double Olympian PORTELA outworked Tallinn European Open winner Anna BERNHOLM (SWE) for all four minutes as the latter was penalised with a shido which decided the scoreless contest. In the second semi-final GAHIE came from behind to defeat former Cadet European Championship winner Katie-Jemima YEATS-BROWN (GBR) in a contest between two of the rising judoka at this weight. Glasgow European Open winner YEATS-BROWN, a former gymnast and rugby player, led with a waza-ari from an ouchi-gari before her French foe restored parity with a waz-ari of her own. The younger fighter pulled away from the British judoka with two yuko scores to seal a place in the -70kg final.

The first bronze medal was claimed by 21-year-old YEATS-BROWN over 18-year-old Grand Slam debutant Giovanna SCOCCIMARRO (GER). The Briton marked her first Grand Slam appearance with a vibrant display as she was composed and energetic for all four minutes. YEATS-BROWN, who had Barcelona 1992 Olympic bronze medallist and Sydney 2000 Olympic silver medallist Kate HOWEY (GBR) offering her instruction from the coaching chair, scored a waza-ari with a sode-tsurikomi-goshi, her favourite technique, with 45 seconds left, to win a superb medal as Britain are reaping the benefit of sending out their best youngsters at this opening period of the Tokyo 2020 Olympic cycle.
The second bronze medal was captured by former Buenos Aires Pan American Open bronze medallist Barbara TIMO (BRA) who scored twice without reply to defeat BERNHOLM. TIMA, who is part of a plentiful and star-laden Brazilian team in Abu Dhabi, opened the scoring with a waza-ari after one minute with a harai-makikomi before the former added a yuko score with a left-sided seoi-nage. BERNHOLM, who moved up from -63kg to -70kg in July, was outgripped and was physically spent as TIMO won her first Grand Slam hardware. 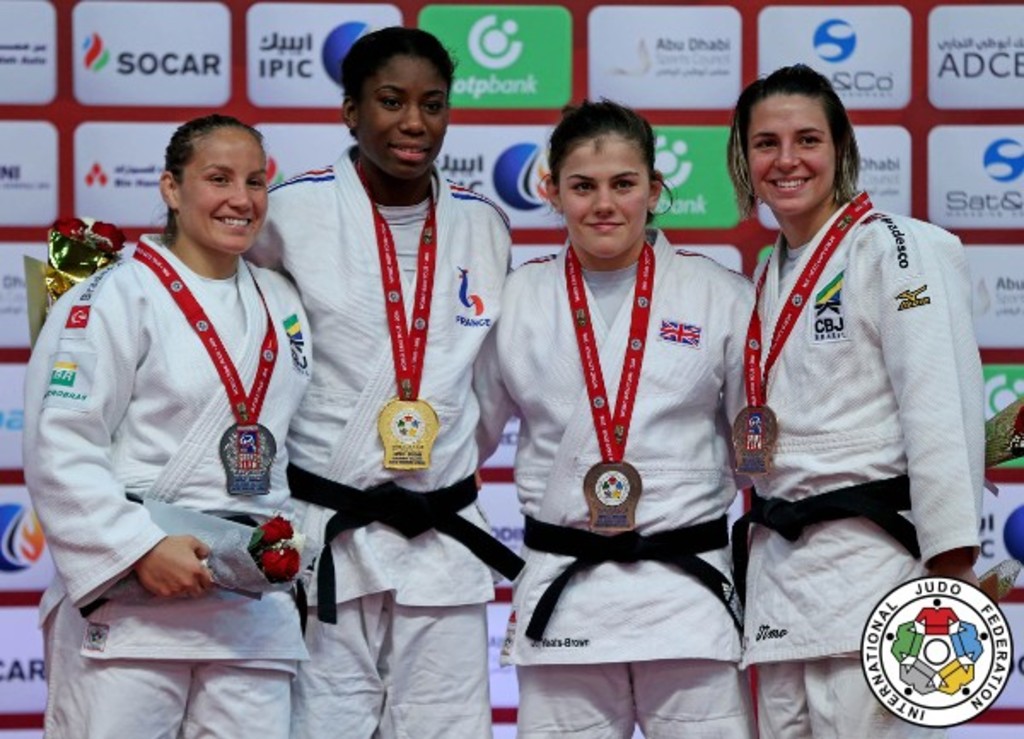 -73kg: Swede MACIAS arrives on the world stage at the expense of world number one

Zagreb Grand Prix silver medallist Tommy MACIAS (SWE) hit the medal trail once again on the IJF World Judo Tour as he upstaged world number one and Rio 2016 Olympic silver medallist Rustam ORUJOV (AZE). MACIAS, 23, showed that his silver medal in Croatia was a stepping stone and a sign of things to come as many pondered whether he could repeat that medal or it would be a one-off. The Swedish judoka was the highlight in the talent-rich -73kg category as he won a tremendous contest as both judoka left everything on the tatami. Every Swede and every Azeri in the building were on their feet while neutral fans were glued to the action as MACIAS showed his character by coming from a yuko down to defeat one of the most consistent performers in judo in ORUJOV who was caught with a low ko-soto-gake for a waza-ari score. 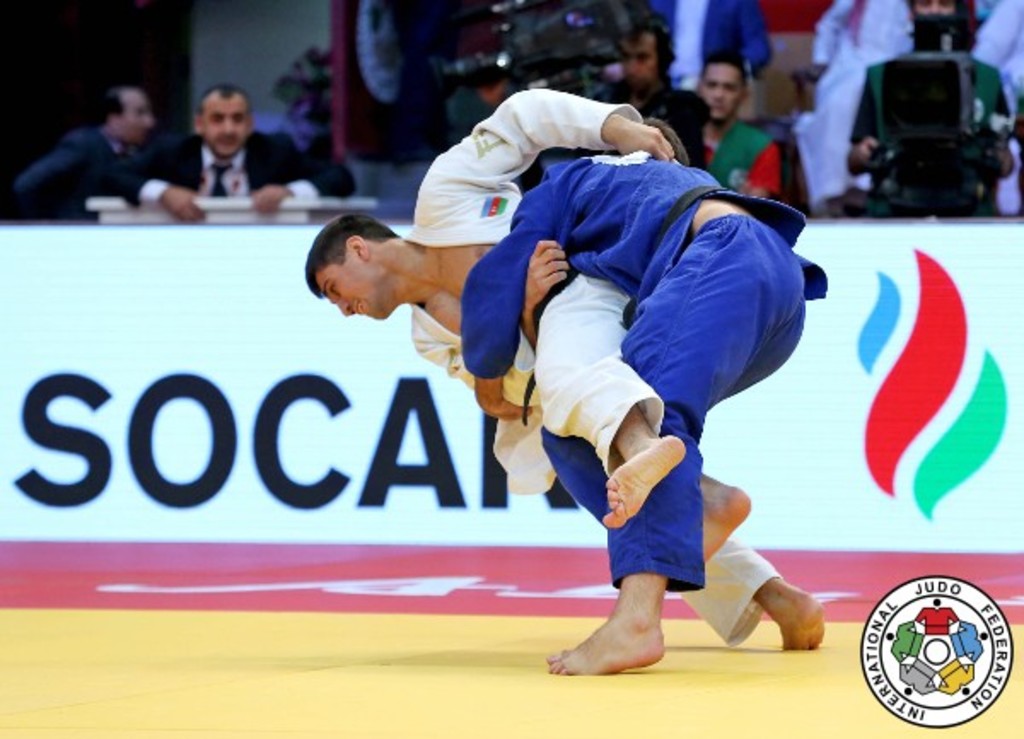 In the first semi-final ORUJOV denied former world bronze medallist Victor SCVORTOV (U.A.E) as he won by a yuko score while in the second semi-final Tyumen Grand Slam winner Musa MOGUSHKOV (RUS) was ousted by MACIAS (SWE) who took control of his Russian rival and drove him over for ippon with a clever counter.

The first bronze medal was won by MOGUSHKOV who defeated 21-year-old Ulaanbaatar Grand Prix bronze medallist Fagan GULUZADA (AZE). The Azeri youngster was competing for a Grand Slam medal for the first time and it showed as he looked tentative while MOGUSHKOV looked at ease. A committed ashi-waza attack from GULUZADA sent the Russian towards the tatami but he turned out and then filled the role of the attacker himself. MOGUSHKOV adopted a low posture and executed a neat turnover from which the Azeri spun out by using his head as a pivot and bridged and the Russian was awarded the maximum score.

The second bronze medal went to SCVORTOV who required added time to beat the resolute Tallinn European Open silver medallist Sam VAN T WESTENDE (NED). The crowd applauded the spirited endeavours of their fighter who rewarded them in golden score as he produced a sensational yoko-tomoe-nage for a yuko score to give the hosts their first medal on home soil. ‘U.A.E.’ chants rung out around the IPIC Arena as SCVORTOV revelled in the ovation and applauded his fans. 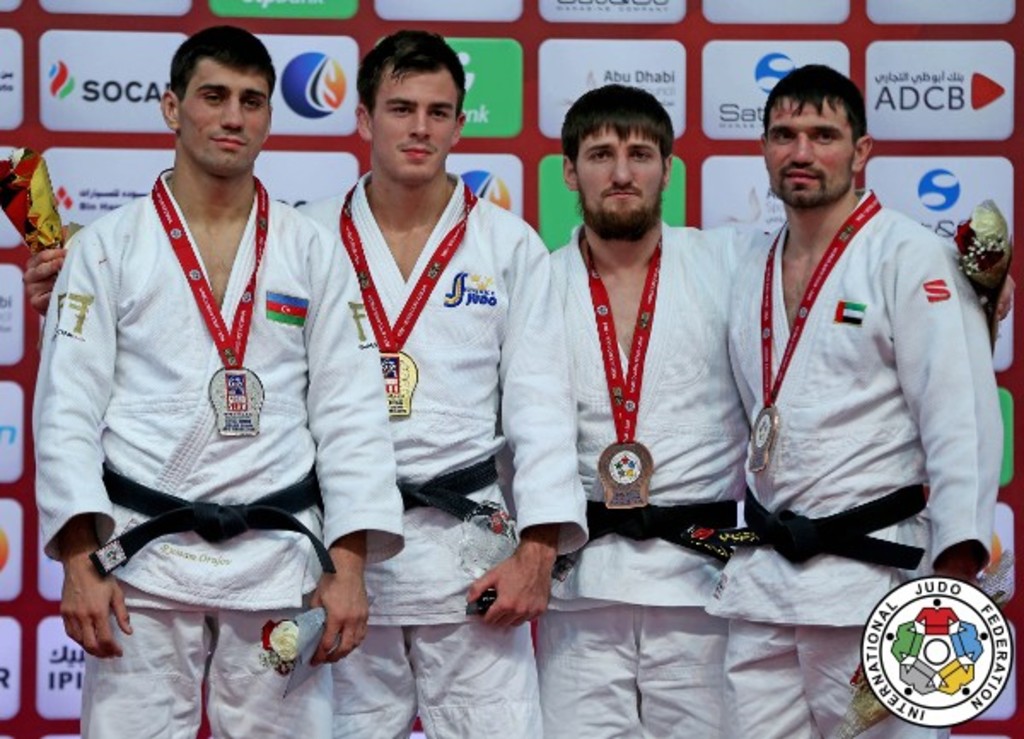 U.A.E. hero Sergiu TOMA (U.A.E.) was again the man of the moment for his country as he became the first U.A.E. judoka to win a Grand Slam and he was able to do it where it matters the most, at his home event and in front of his federation and supporters. Rio 2016 Olympic bronze medallist TOMA opposed world bronze medallist Victor PENALBER (BRA) in the final and they cancelled each other out initially with two shidos apiece after as many minutes. A driving te-waza movement with a minute left gave TOMA a waza-ari and the home fans raised the volume in the IPIC Arena as their leading light made new history only two months after his Olympic heroics. 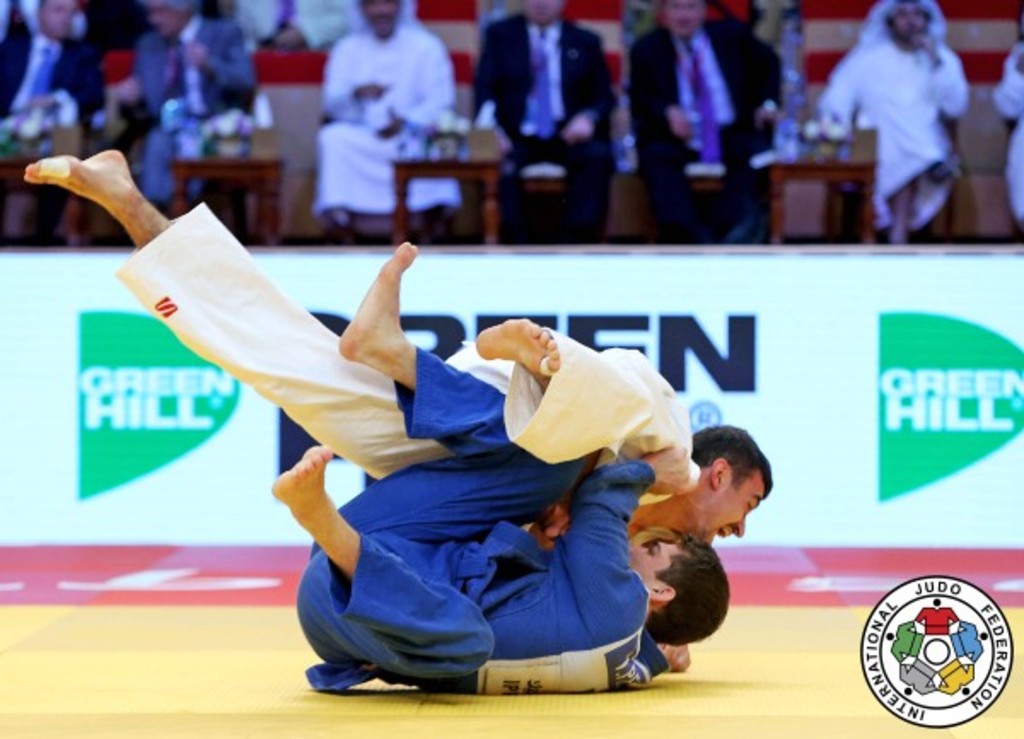 In the first semi-final TOMA thwarted former Paris Grand Slam bronze medallist Frank DE WIT (NED) by ippon as the former took advantage of his opponent being off balance after a laboured attack and powered over the young Dutchman with 35 seconds remaining. DE WIT was shaping up for a pick up but was not expecting such bold resistance and was unsteady as TOMA took full advantage. In the second semi-final PENALBER defeated former world silver medallist Srdjan MRVALJEVIC (MNE) with a yuko after 44 seconds proving to be the only score of the contest as the attacks of the latter lacked intent.

The first bronze medal was won by 32-year-old stalwart MRVALJEVIC who bested an out-of-sorts former Tyumen Grand Slam winner Ivan VOROBEV (RUS). MRVALJEVIC won his first IJF medal since his World Championships 2011 silver medal at the Tashkent Grand Prix two weeks ago when he won bronze and following that five-year wait the veteran won his second IJF medal in three weeks with a stylish sasae-tsurikomi-ashi earning a yuko which was the only score in the four minute contest.

The second bronze medal was DE WIT who continues to emerge as one of the top prospects in this Olympic cycle. The 20-year-old, who is one of the leading hopes at the Netherlands’ new centralised national training centre, defeated 19-year-old Almaty Grand Prix bronze medallist Didar KHAMZA (KAZ) to win his second Grand Slam bronze medal. DE WIT made a fast start as he threw with a yoko-tomoe-nage after just 15 seconds for a yuko score and 45 seconds later KHAMZA inexplicably grabbed the legs of his opponent to receive hansoku-make. Dutchman DE WIT was ecstatic with the result and his career is only moving in one direction as he looks to break into the top 20 on the world ranking list. 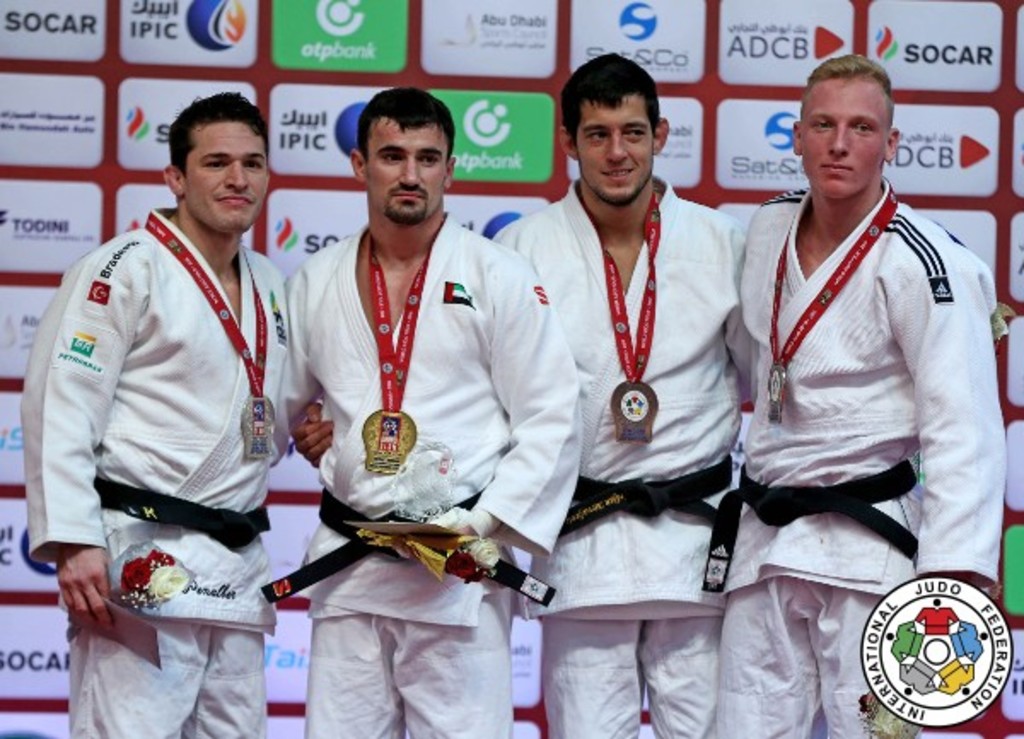