The final edition of the Qingdao Grand Prix burst into life on Friday as the fast-paced and free-flowing lightweights fought for the five titles at stake on day one at the Qingdao Guoxin Stadium. 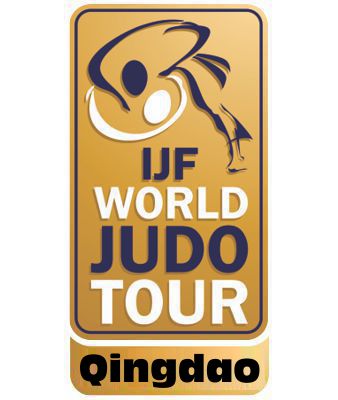 The final Grand Prix of the year is also the final instalment of Grand Prix judo in Qindao as China’s marquee judo competition will move next year to Hohhot in Inner Mongolia in the north of the country.

Three women’s categories and two men’s categories were contested on Friday as the women’s -48kg, -52kg and -57kg judoka and the men’s -60kg and -66kg athletes were looking to win the final Qingdao Grand Prix medals. 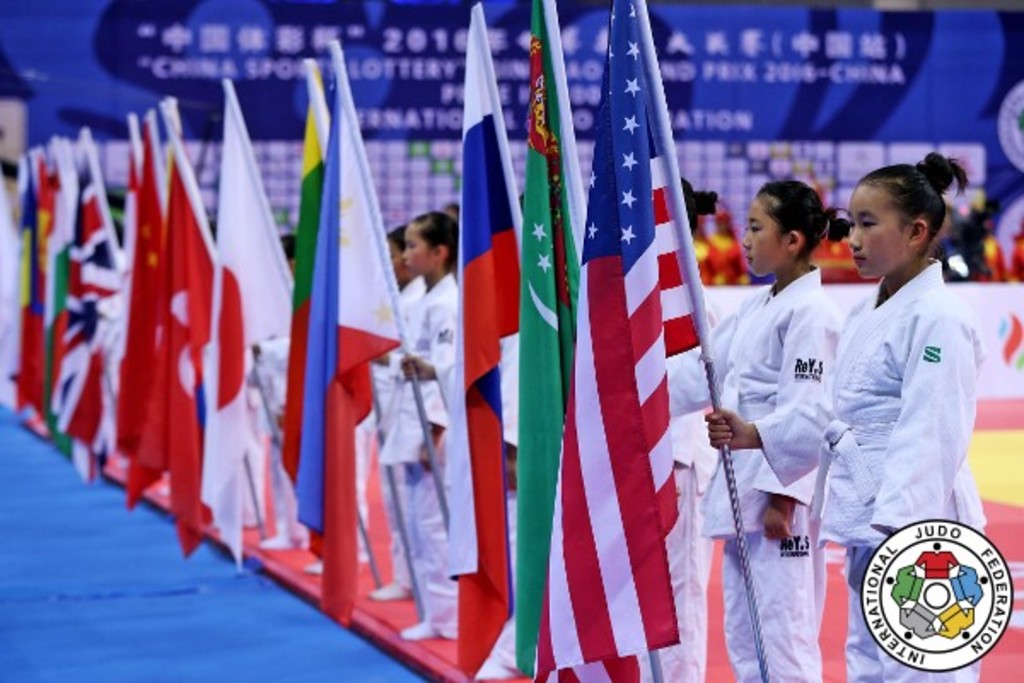 -48kg: LI leads the way for high-flying hosts in the lightweight category

Former Pan American Open bronze medallist LI Yanan (CHN) won her first Grand Prix gold medal in the first final in Qingdao on Friday. Tashkent Grand Prix winner Mariia PERSIDSKAIA (RUS) was the favourite in the gold medal contest despite giving up home advantage to LI. A shido against PERSIDSKAIA was the only time the referee was called up upon during the four minute final as LI celebrated a golden start for China. 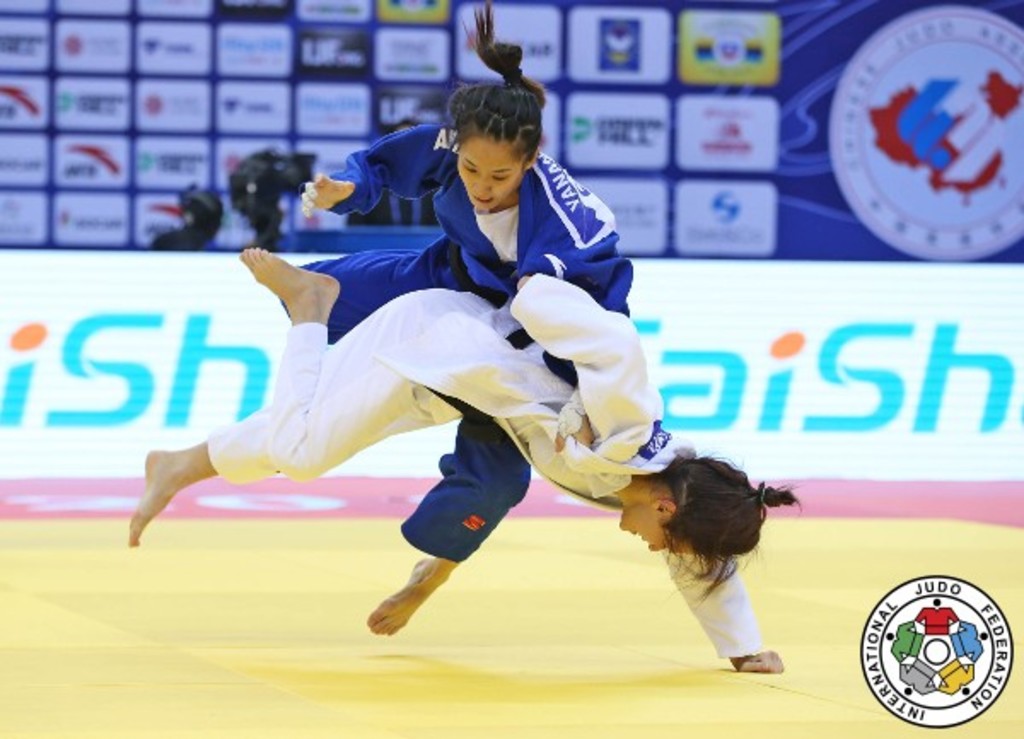 In the first semi-final PERSIDSKAIA ousted YIN Lingling (CHN) by a yuko as the teenage home fighter took her opponent the full distance. The yuko from PERSIDSKAIA was the only score of the contest as YIN slipped down into the bronze medal contest and the former moved into the -48kg gold medal contest. In the second semi-final 20-year-old IJF World Judo Tour debutant GUAN Xiaoxian (CHN) lost out to LI who prevailed by a yuko score in a traditionally tight contest between two teammates.

The first bronze medal contest was won by GUAN who beat teammate YANG Shuang (CHN). GUAN held down YANG, who had fifth and seventh place finishes at her home Grand Prix in previous years, for a waza-ari score which proved enough as a barrage of seoi-nage attacks from YANG was too little too late. The second bronze medal was won by YIN over 22-year-old seoi-nage specialist LIN Chu Yun (TPE). The scoreboard was all square after four minutes as both judoka had two shidos and no scores to force the contest into golden score. A shido for LIN handed the contest and bronze medal to the Chinese competitor as the hosts kept both -48kg bronze medals in the country. 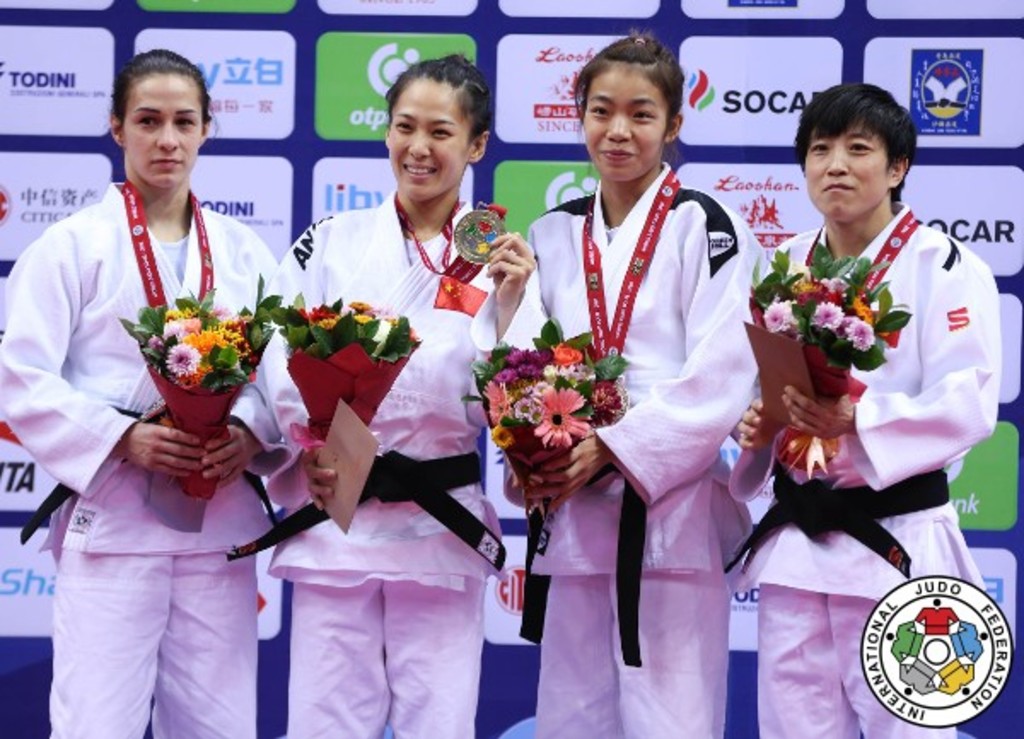 World number 115 CHEN Chen (CHN) will skyrocket up the world rankings after winning her country’s Grand Prix by beating Orenburg European Cup bronze medallist Galiya SAGITOVA (RUS) in the -52kg final. CHEN, who was fifth here in 2012, won the scoreless final on shido penalties as SAGITOVA was reprimanded for not attacking and then again for passivity while the former was only penalised once. China and Russia were the two leading nations in Qingdao and on this occasion it was the home nation who prospered. 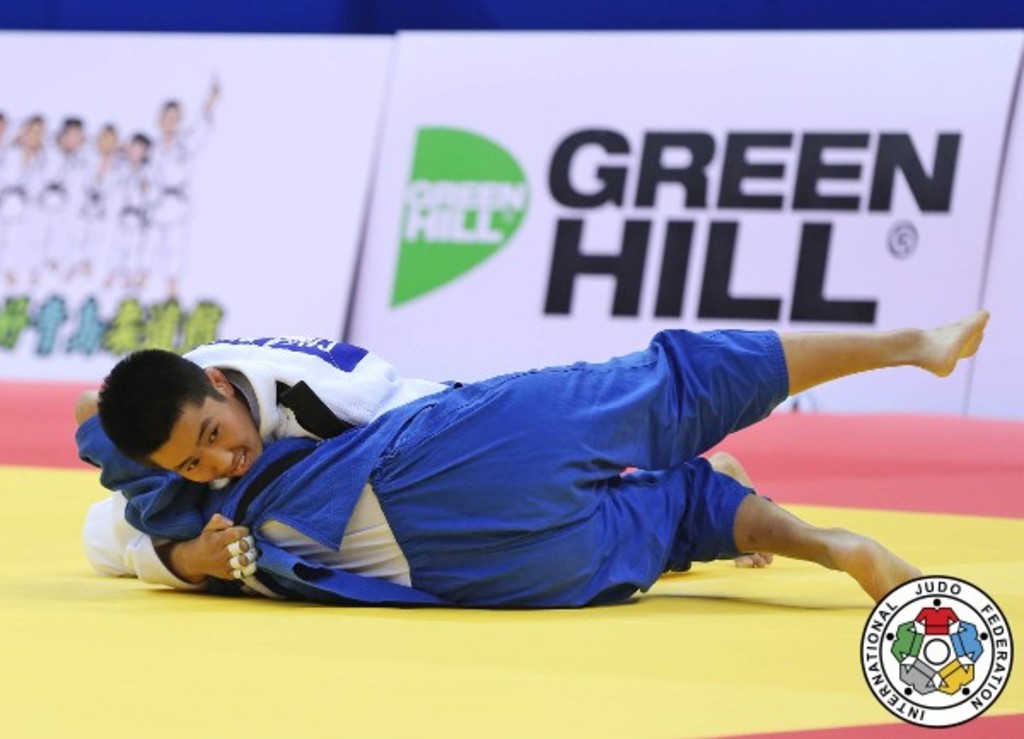 In the first semi-final little-known CHEN Wei (CHN) lost out to SAGITOVA in golden score by a shido for passivity. At the end of regulation time both judoka had a shido with CHEN being penalised for dropping and SAGITOVA for not taking a grip. SAGITOVA pressed the action in golden score and after three a half minutes the referee had seen enough to penalise the Chinese judoka.

In the second semi-final former Orenburg European Cup bronze medallist Natalia PAVLOVA (RUS) was defeated by CHEN who guaranteed herself a home Grand Prix medal at her third attempt after winning by a yuko score.

The first bronze medal was clinched by Taipei Asian Open winner CHEN Chin-Ying (TPE) who scored a yuko and followed up in ne-waza by freeing a leg to apply the osaekomi for 20 seconds and ippon. CHEN looked impressive as she won her country’s second medal of the competition by countering a tani-otoshi and overpowering the Russian on the ground. 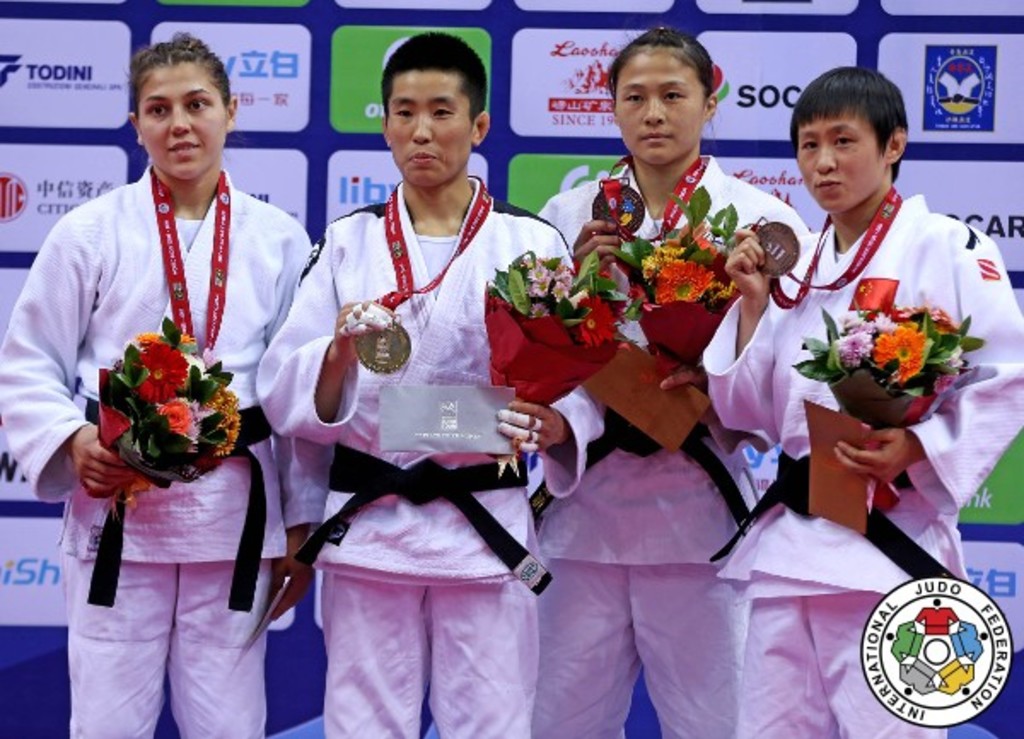 Tashkent Grand Prix winner Anastasiia KONKINA won back-to-back Grand Prix gold for the first time in her young career as she thwarted first time Grand Prix finalist LIN Yuanyuan (CHN). KONKINA, 22, opposed LIN for the first time and took command of their final with a waza-ari from an uchi-mata before utilising the same technique for a match-winning waza-ari. LIN was fighting on home soil on the IJF World Judo Tour for the third time and finally had a silver medal to show for her perseverance while KONKINA showed that she has a bright future ahead of her on the road to Tokyo 2020. 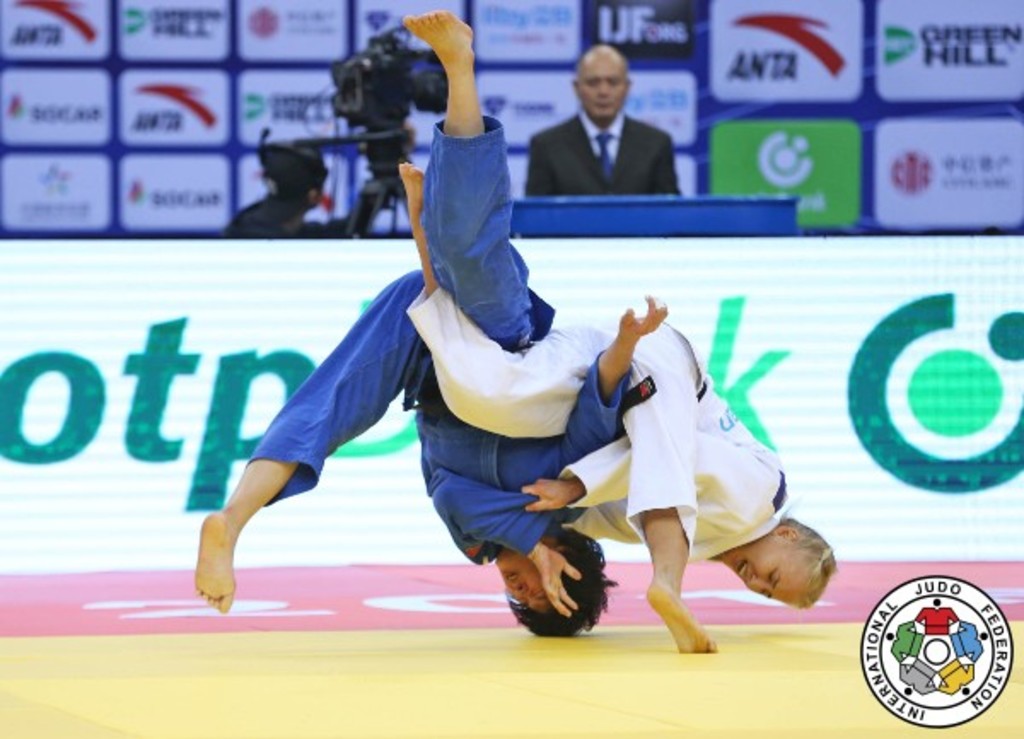 In the first semi-final KONKINA defeated 21-year-old former Junior Asian Championships winner LEE Hsin-Yun (TPE). KONKINA submitted LEE with a juji-gatame having been a waza-ari in front as Russia made sure they would feature heavily in the final block. In the second semi-final FENG Xuemei (CHN), who has never fought outside of China, fell to colleague LIN Yuanyuan (CHN) who was competing at the Qingdao Grand Prix for the third time. LIN pinned down her countrywoman for 20 seconds and a place in the gold medal contest.

The first bronze medal was won by beaten semi-finalist FENG who saw off 27-year-old LI Xiandong (CHN) whose only previous IJF World Judo Tour competition was the World Championships in Rio de Janeiro in 2013. The contest was even at the end of regular time and LI was penalised in golden score for dropping to gift the contest to her teammate FENG who originally led with a ko-uchi-gake which was followed by a yuko from an osoto for LI. The second bronze medal was won by Asian Championships bronze medallist YAMAMOTO Anzu (JPN) who put on a clinic against LEE. The 22-year-old Japanese, who has been left out of her country’s team for the Tokyo Grand Slam in two weeks’ time, scored a yuko from a seoi-nage, a waza-ari from an ouchi-gari and completed a full house of score with ippon from a ko-uchi-gari. 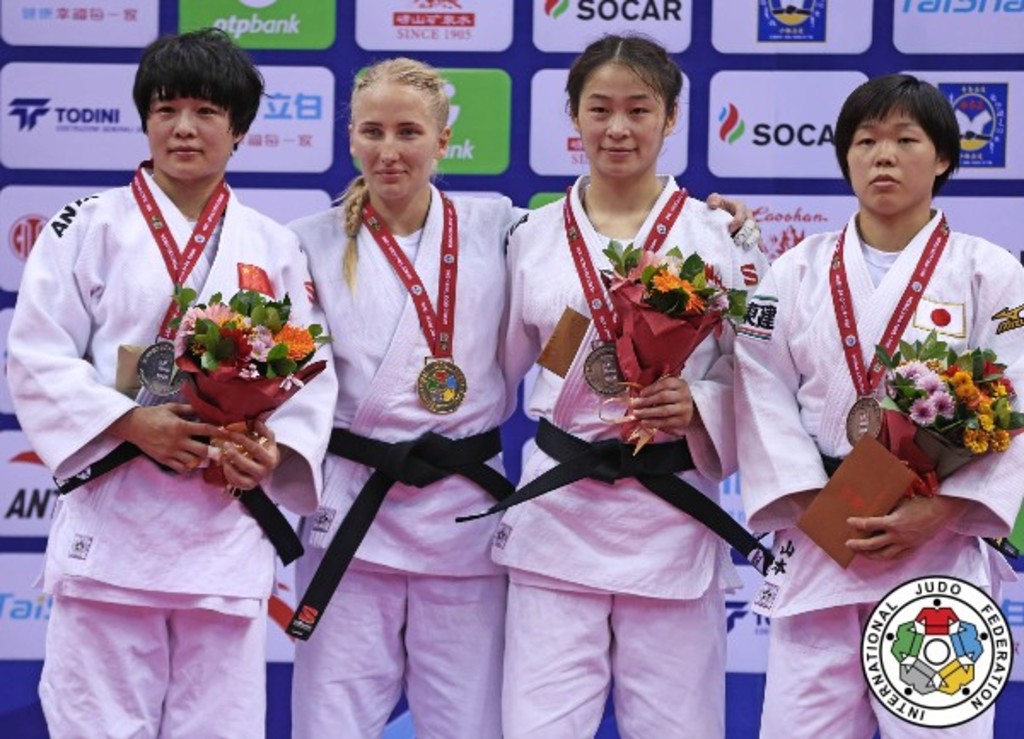 -60kg: DASHDAVAA finds form in Qingdao to close in on the world’s best

Former world silver medallist DASHDAVAA Amartuvshin (MGL) bounced back from a below-par outing in Uzbekistan in his last competition to win gold at the Qingdao Grand Prix with victory over Casablanca African Open silver medallist Islam YASHUEV (RUS). DASHDAVAA, who was fifth in Tashkent, led the final with a waza-ari from a pure te-waza attack and won the final with a tate-shiho-gatame hold for 15 seconds. The Mongolian star, who started the day as the world number seven, winked at the camera after winning his fifth Grand Prix gold medal. 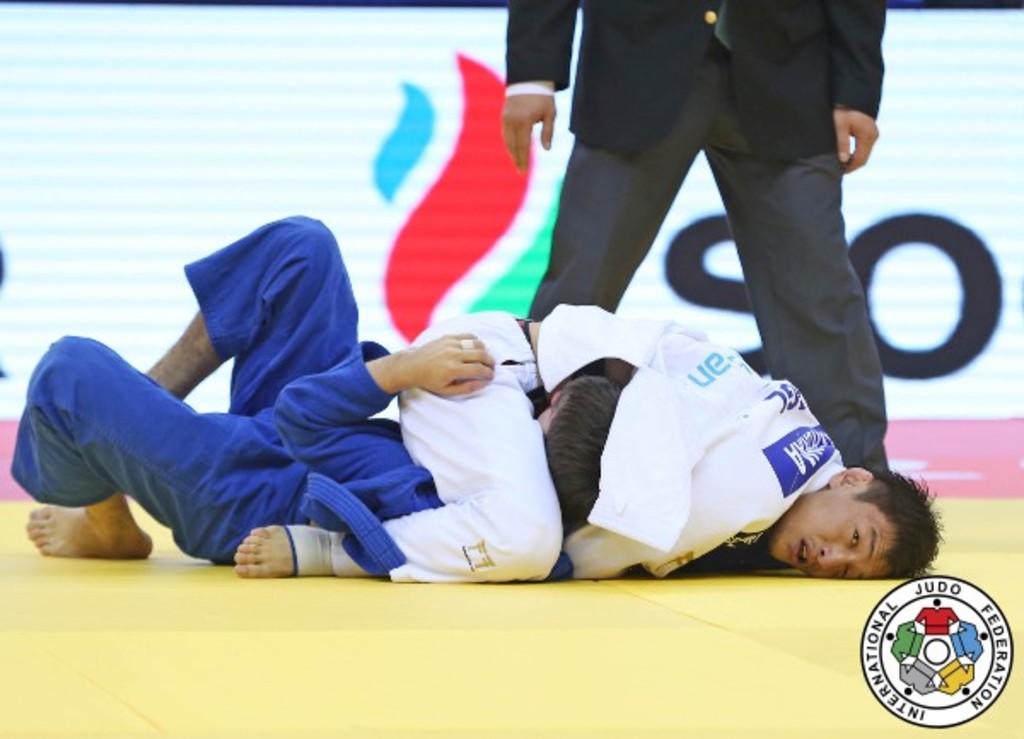 In the first semi-final DASHDAVAA bested 19-year-old YANG Yung Wei (TPE). The Mongolian produced a yuko from a ura-nage which was the only score of the content as Junior Asian Championships bronze medallist YANG was a worthy opponent but could not push his opponent. In the second semi-final YASHUEV fought off teammate Sayan KHERTEK (RUS) who finished fifth at the Tyumen Grand Slam this year. KHERTEK made a tentative start as he was penalised twice for passivity and YASHUEV asserted himself to hold down his countryman for 20 seconds and ippon with a mune-gatame in the first semi-final on day one.

The first bronze medal was won by KHERTEK who was a convincing winner against 2013 World Championships competitor TANG Xiaolong (CHN). The Russian led by a waza-ari from a beautiful shoulder throw having threatened with his seoi-nage in the opening minute of the contest. KHERTEK added a yuko before pinning a mismatched TANG for 15 seconds with a yoko-shiho-gatame to win by wazari-awasette-ippon. The second bronze medal was won by teenager YANG who showed a wide repertoire of techniques against former Taipei Asian Open silver medallist SU Rilege (CHN). SU was penalised for passivity after he made a negative start while YANG came close to troubling the scoreboard with persistent ashi-waza attacks. YANG added a yuko with 33 seconds left before wrapping up the win in osaekomi to capture his first IJF World Judo Tour medal. 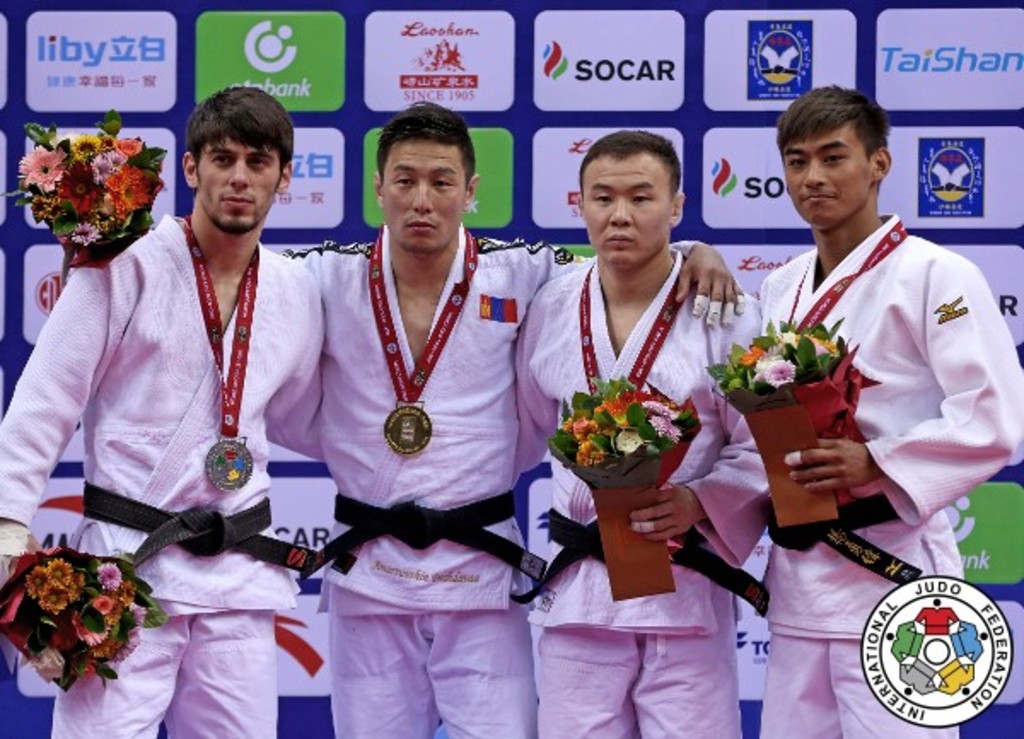 Former Miami Grand Prix winner Abdula ABDULZHALILOV (RUS) topped an IJF Grand Prix medal podium for the first time since 2013 as he saw off teammate and Tyumen Grand Slam silver medallist Anzaur ARDANOV (RUS) to win -66kg gold. World number 58 ABDULZHALILOV was the leading man with three wins by ippon from his four contests including the final which came courtesy of a hold down which started inside the area and moved outside as ARDANOV tried but failed to free himself from the grasp of his game colleague. 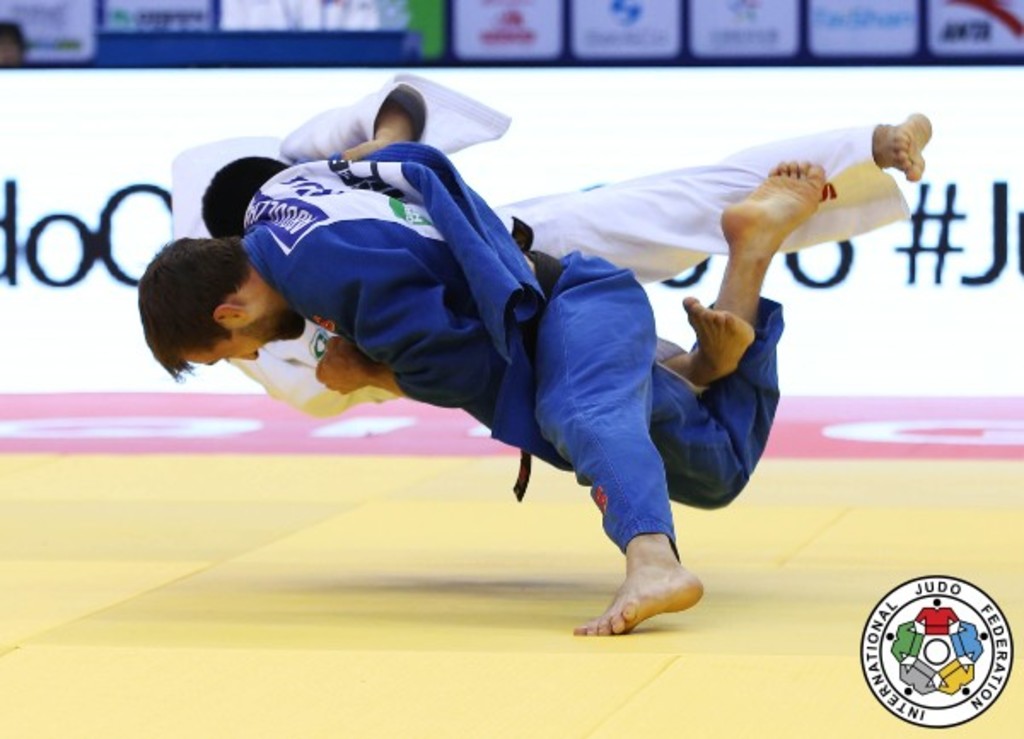 The first bronze medal was won by IJF World Judo Tour newcomer TAGAWA Kenzo (JPN) as he upstaged world number 16 JEREB. The 20-year-old Japanese fighter threw his Slovenian opponent after 25 seconds with a sode-tsurikomi-goshi which proved to be the only score of the contest. The second bronze medal went to DOVDON who registered the smallest score possible to see off 20-year-old former Taipei Asian Open bronze medallist QING Daga (CHN). A yuko was the difference as the Mongolian held down QING with a kata-gatame for 10 seconds before the latter escaped in the closing minute of the contest. 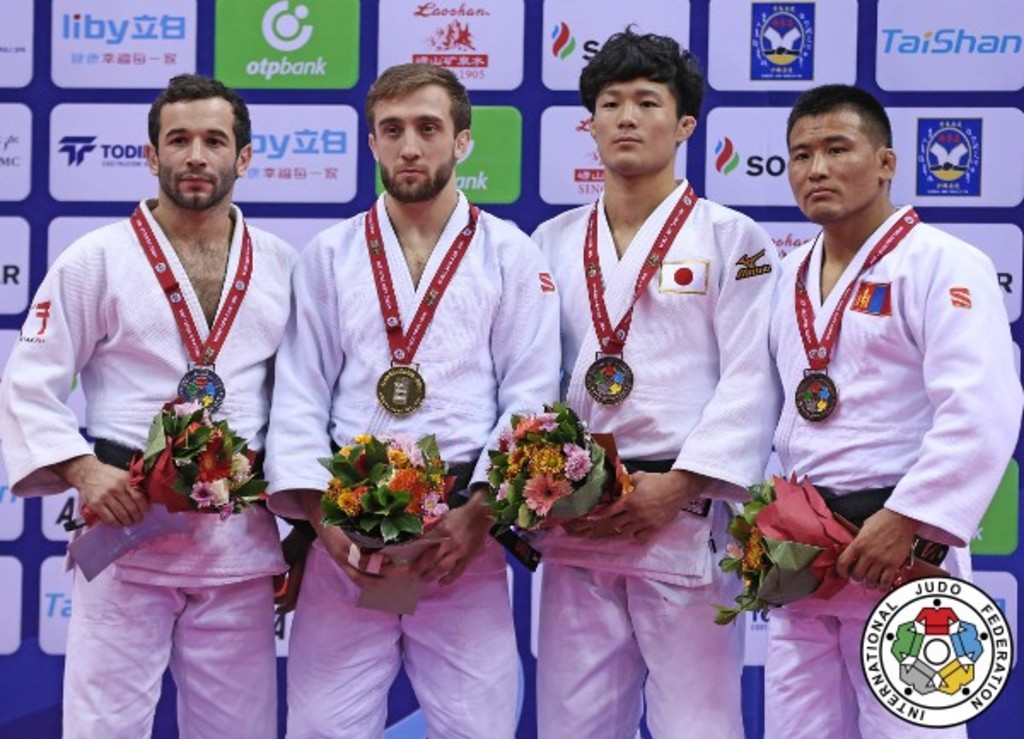