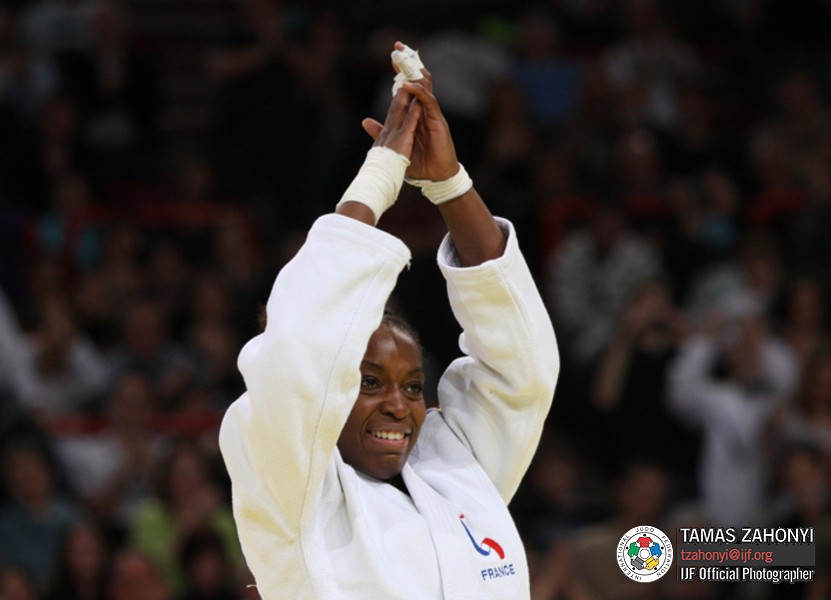 Gevrise Emane prolonged last year’s title and was the only judoka to do this. 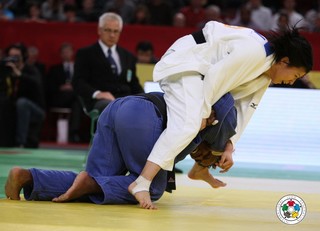 
Sixteen medals for European fighters at the first day of the Tournoi de Paris. At the Grand Slam the French public celebrated two gold medals for their home favourites. 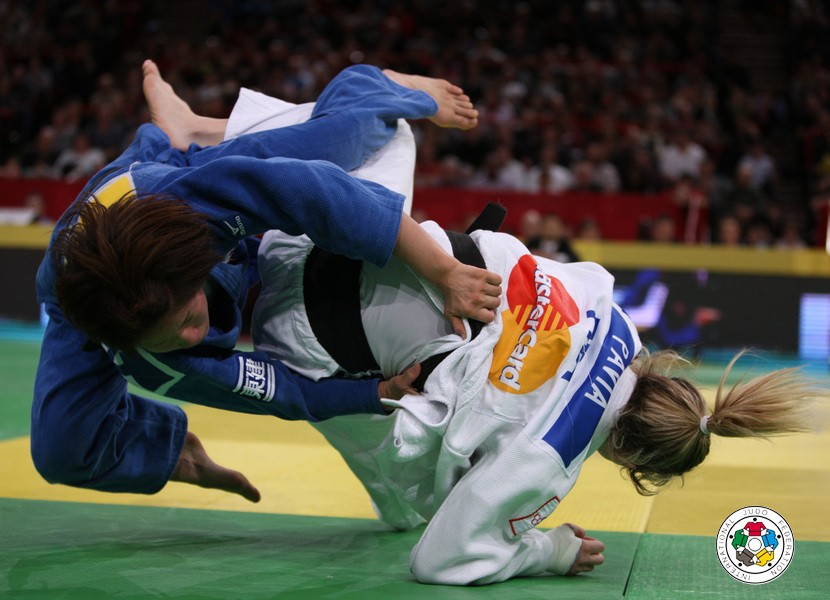 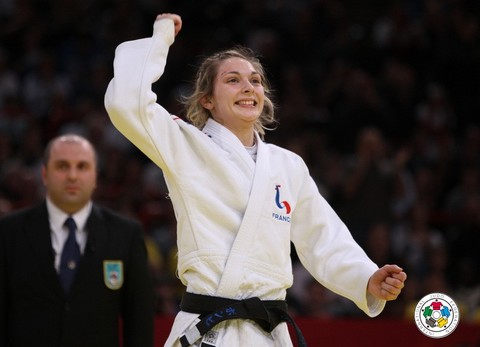 In the women’s category U57kg Automne Pavia surprised with "GOLD" by  defeating Aiko Sato of Japan.


The European judoka collected 16 medals after day one, five more than last year over seven categories. 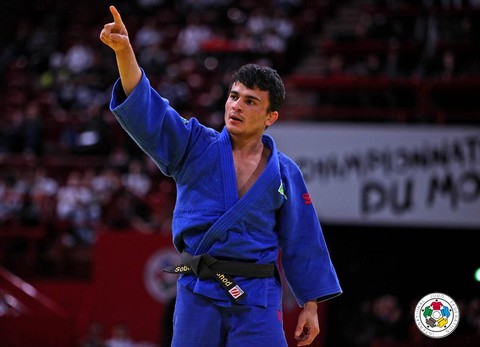 In the men’s U60kg it was expected to see Rishod Sobirov in the final. He is the strongest in this moment. Without his Japanese rival Hiraoka missing the Asians didn’t play a big role. Both Japanese participants, Shishime and Yamamoto lost in the quarter finals. Three European fighters qualified for the finals. Sobirov defeated Amiran Papinashvili (GEO), while Armenian Hovhannes Davtyan first defeated Jeroen Mooren (NED) and in the semi Georgii Zantaraia (UKR). Davtyan couldn’t prevent Rishod Sobirov from winning. 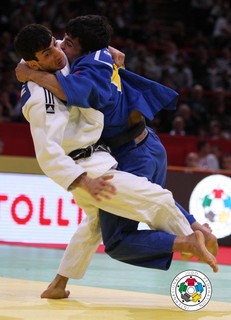 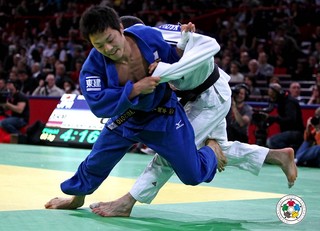 Under 66kg it was Japan that dominated. World Champion Junpei Morishita was stronger than three European fighters and in the final he met Armen Nazaryan, another 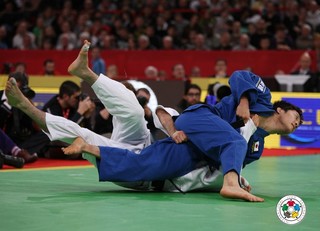 was the only Armenian who had ever won a medal for his country in Paris, and today they celebrated two silver medals. So still silver with golden egdes.
David Larose (FRA) and Masaaki Fukuoka won bronze. World bronze medalist Khasbaatar and Korval finished fifth.

Japan collected another gold medal in the men’s U73kg division.

Riki Nakaya won his second consecutive GOLD MEDAL after his victory at the IJF Grand Slam of Japan. At the Kano Cup he defeated Yuki Nishiyama, today he had a tough fight with Hungarian Attila Ungvari. The young  Ungvari is getting stronger and stronger and reached the final for the first time in the family. Miklós won bronze in 2006 and 2009 but never reached the final. Attila defeated European Champion Pina (POR) in the quarter final and Ugo Legrand (FRA) in the semi. But Nakaya was unreachable today. Nakaya defeated his compatriot Awano in the semi final who bronze at the Worlds and this year’s IJF Masters too. 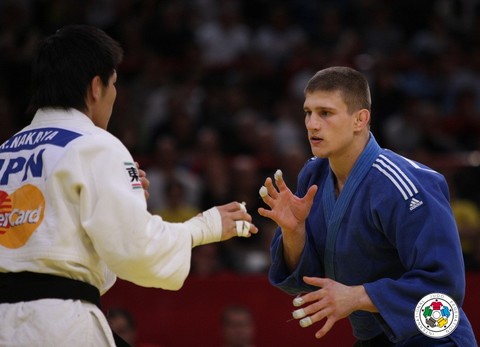 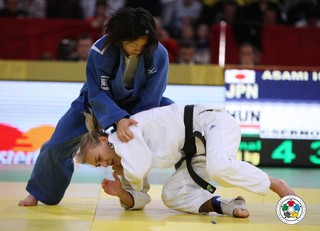 In the women lightweight category it was obviously Japan to pick up the GOLD medal.  World Champion "Haruna Asami" took the first place after she defeated Hungarian Eva Csernoviczky. 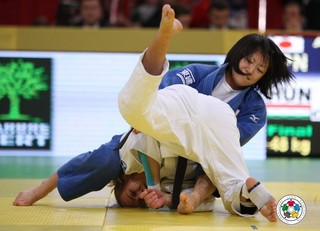 The blond European is already more successful in one month than in 2010. Although she won European silver, she seemed to have a subscription for the fifth place last year, but in 2011 she won bronze at the Masters in Baku and today a beautiful silver medal. Csernoviczky defeated Olympic Champion Alina Dumitru, who she had previously lost nine matches against. Only at the European Championships in Tbilisi in 2009 she beat the successful Romanian. 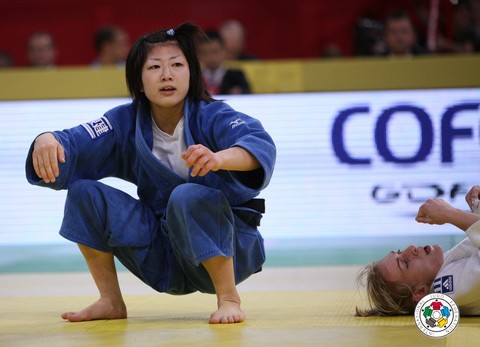 Today she interrupted her nemesis’ ambitions for a second time. 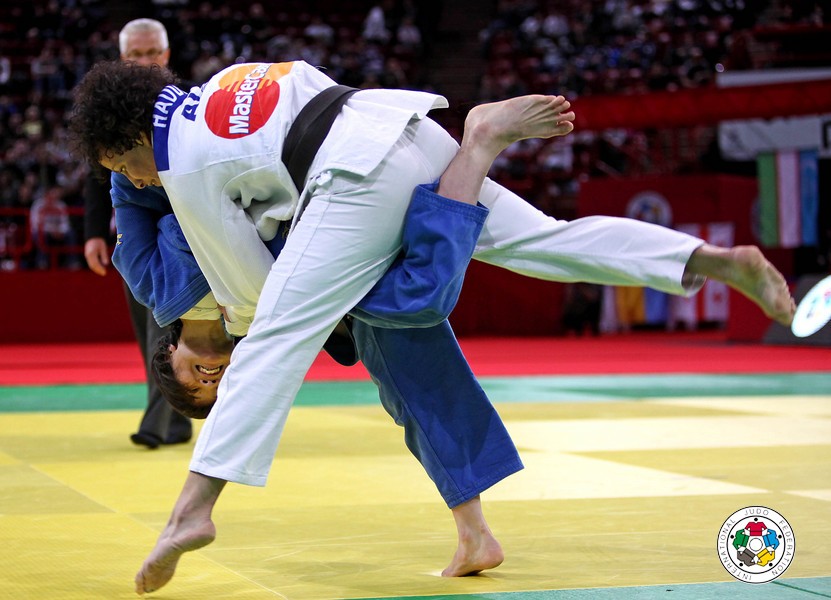 (MGL) was the unexpected winner of the women’s U52kg. It was the most surprising category of today where gold was expected for the world’s number one Misato Nakamura. But the Japanese WRL leader lost to French revelation Priscilla Gneto who showed her excellent skills today at the Stade Bercy. In a tough fight she defeated the runner-up of the World Championships. Gneto however lost her semi final against the Mongolian who was also able to win gold. In the final Soraya Haddad was the victim of Munkhbaatar's biggest ever success. 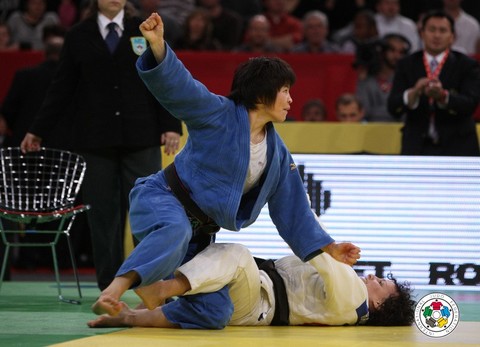 In 2009 she had won a World Cup in her own country but the final of Paris is another ballgame. Where other favourites failed like Ramos (POR), Tarangul (GER), Miranda (BRA) and Muller (LUX), Haddad, Gneto and Munkhbaatar outperformed today. Spanish Ana Carrascosa who won the bronze is a more expected rival in this division.

In perhaps the most complicated division, U57kg it wasn’t Portuguese Telma Monteiro who could prolong her title of the Masters. French Automne Pavia got the applause of the home crowd after her surprise win over Aiko Sato of Japan. Sato had beaten Monteiro in the semi final while Pavia defeated Corina Caprioriu (ROU). In this strong category other great fighters could only watch the final block. Chitu (ROU), Quintavalle (ITA), Loko (FRA), Ribout (FRA), Karakas (HUN) and Bellorin all lost earlier than expected.

Gevrise Emane (FRA) was today’s icing on the cake of the French spectators. In the last match of today it was Emane who prolonger her title after defeating Chinese Lili Xu with a great point. Emane was by far the best, but Agbegnenou was another heartbreaker after her great performances of today. Agbegnenou who had won the final of the Grand Slam of Paris against Gevrise Emane was again in great shape and devastated German Claudia Malzahn in the quarter final but lost to Xu in the semi final. 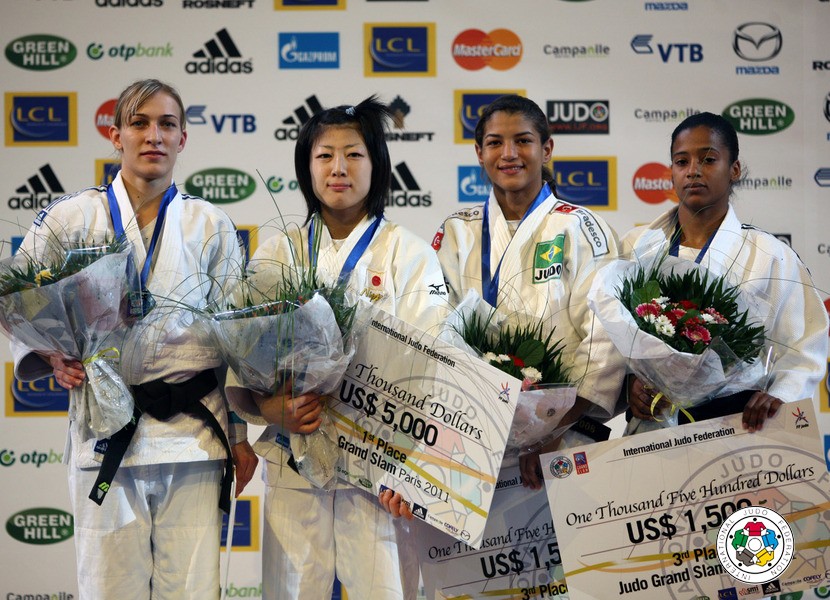 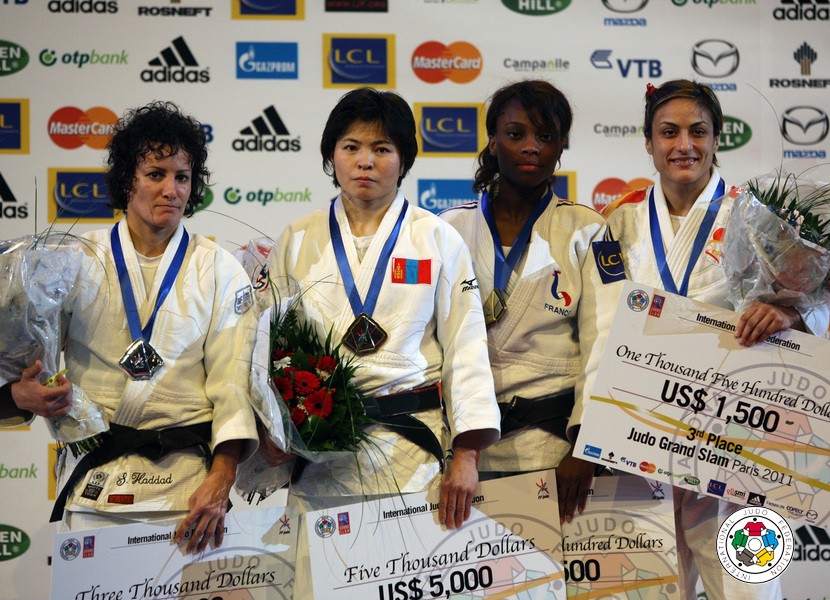 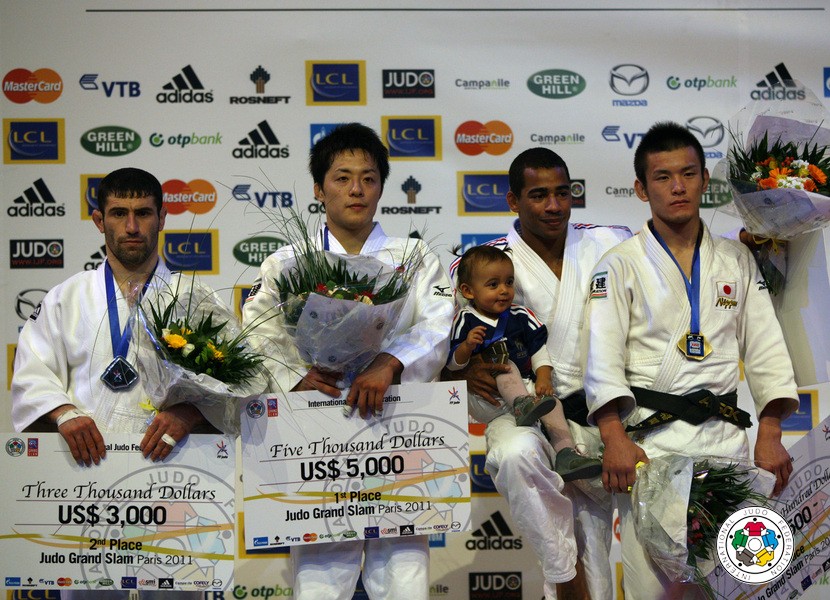 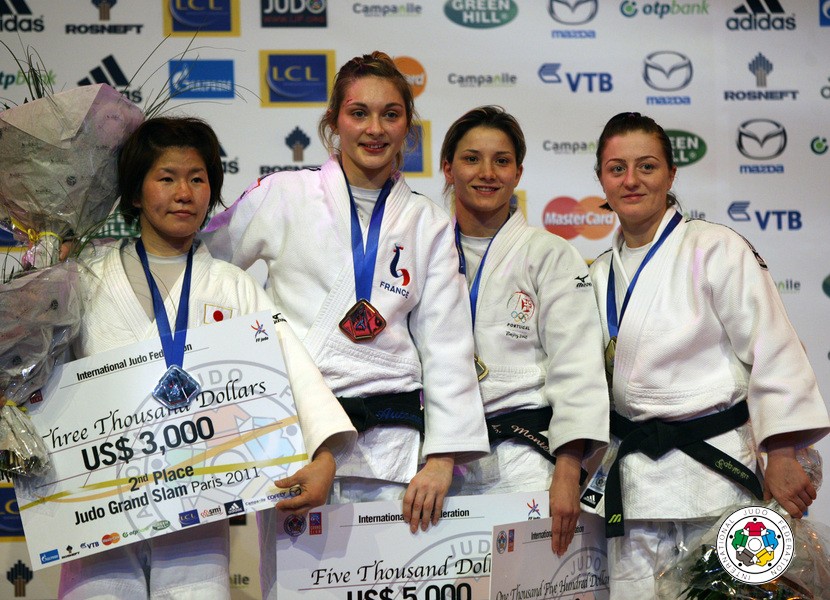 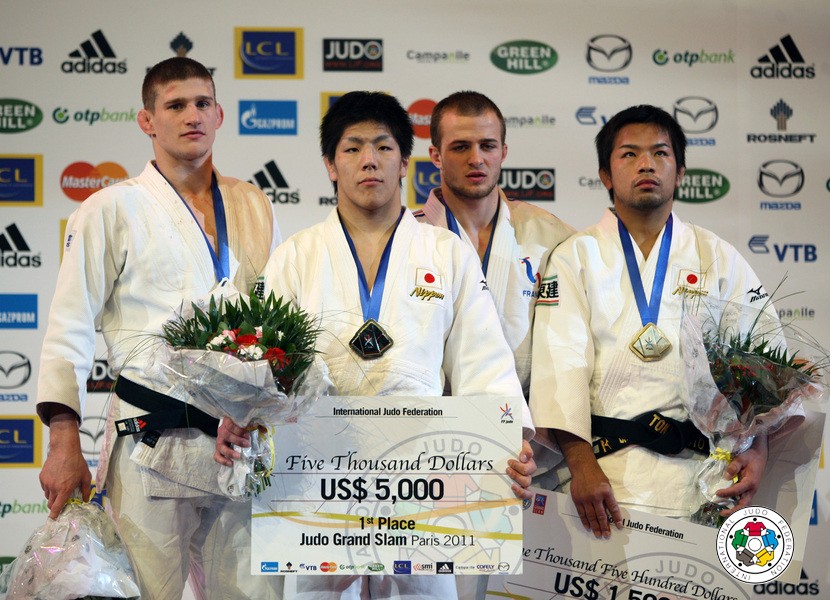 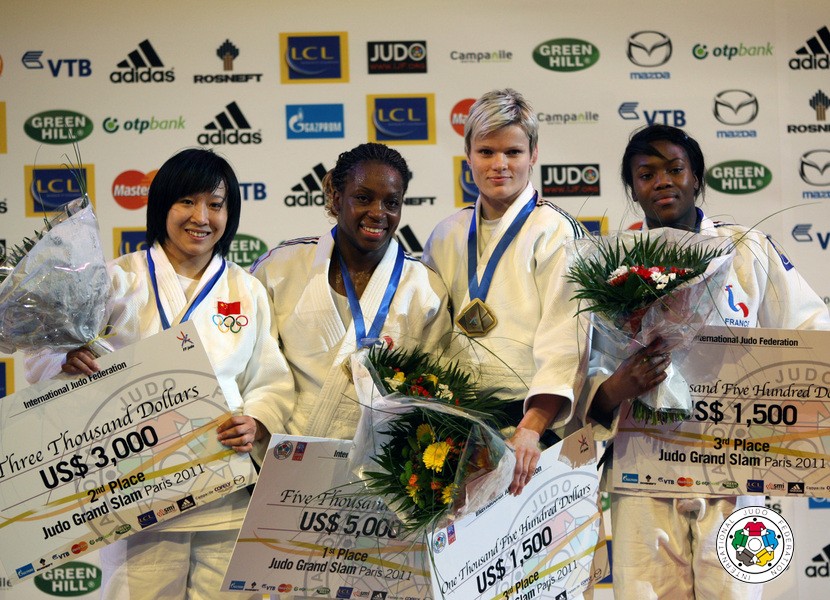 
At the end of the competition, Rishod SOBIROV (UZB) and Haruna ASAMI received the Shin-Ghi-Taï trophee, offered by the French Judo Federation to athletes who have demonstrated a perfect behaviour during the competition.