By John Leicester, The Associated Press | The Canadian Press

PARIS - Roger Federer has Rafael Nadal, the Yankees have the Red Sox, Ferrari has McLaren, but Teddy Riner is all alone.

In his sport, judo, the Olympic champion with a physique like Shaquille O'Neal's and first name borrowed from his older brother's teddy bear has few rivals to really trouble him. The heavyweight from France was so invincible at the London Games last August that the crowd booed his opponent in the final for not putting up more of a fight. So why does Riner still bother? When judo is this easy, what's the point?

With five world championship titles and Olympic gold under his black belt by age 23, Riner could rest on his stack of laurels. Like Barack Obama, Brad Pitt and others, Riner has his statue in the Grevin waxwork museum in Paris. He has offers to switch to rugby or basketball and turned down a lucrative proposal from the United States to fight in mixed martial arts.

Life is so good that Riner was able to take off for nearly four months after his London triumph, to globe-trot, dive with sharks, take in an opera in Sydney and give his giant body (he's 2.03 metres tall and weighs 130-plus kilograms) its first long breather since his mid-teens.

A phrase Riner repeats to himself — "Never let anyone steal your beefsteak" — helps explain why his vacation didn't become life-long. Other heavyweights — "wolves," he calls them — would happily take Riner's throne if he abandoned it. Like 17-time major champion Federer in tennis, 7-time world champion Michael Schumacher in Formula One or France's dominant rallying superstar Sebastien Loeb, Riner intends to leave possibly indelible marks on sport. He bats away suggestions that he has too few rivals to keep him occupied.

"A lot of people say that. But if I one day stopped training as I do, gave up my advantage, my intelligence in a fight and stopped asking questions of myself, my opponents would devour me," he said in an Associated Press interview.

"It's not that there isn't anybody. It's that I don't let anyone take my place. They are there. I see them. The moment I step out onto the mat, they want to get me. It's up to me to be the strongest. Even if I'm not at my best, I have to be stronger than them, never let anyone get ahead of me, just as Schumacher did, like Sebastien Loeb, like all the best." 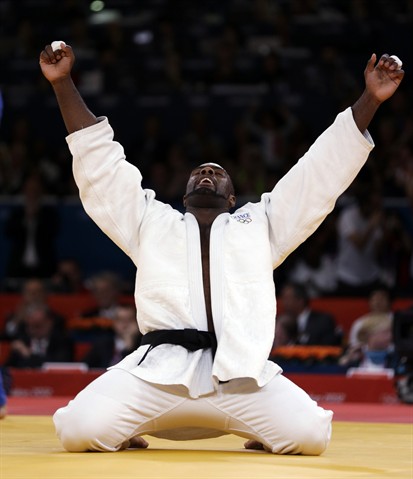 Because he's so young and dominant, it isn't a stretch to imagine Riner eclipsing the gold-medal haul of the now retired Ryoko Tani. She won seven at worlds and two at the Olympics.

Riner's five world titles are already a record for men. To match Tadahiro Nomura's three Olympic golds from the 1996, 2000 and 2004 games, Riner would have to continue past the 2016 Rio de Janeiro Olympics to 2020.

Riner refuses to get ahead of himself. "You have to take one Olympic Games after another," he said.

But he added: "I have the chance to set records that could last forever. So I have to take advantage of that."

Riner was born on the French Caribbean island of Guadeloupe, where he has family, but grew up in Paris.

Asked to name five opponents he is wary of, Riner paused.

His first pick was Alexander Mikhaylin, the Russian he defeated in the London Olympic final.

After a long "Umm," Riner then named Daiki Kamikawa of Japan — the last man to beat him in a major final, in 2010 — followed by a Tunisian, a German and a Hungarian who also are "strong, quick and who you always have to be wary of."

"They are wolves and they are improving," Riner said of the five.

At the time, Riner was ungracious about Kamikawa's world championship victory, saying he was "cheated" and "robbed." Even now, Riner notes that Kamikawa and Uzbekistan's Abdullo Tangriev, at the 2008 Beijing Olympics, beat him not with throw-downs but with judges' decisions, "which sometimes were controversial." Those are Riner's only notable defeats at major events since his first world title in 2007.

Partly because "I'm a bit of an ambassador for my sport," Riner rejected the proposal to fight in mixed martial arts. "That isn't me. That isn't how I was brought up," he said. 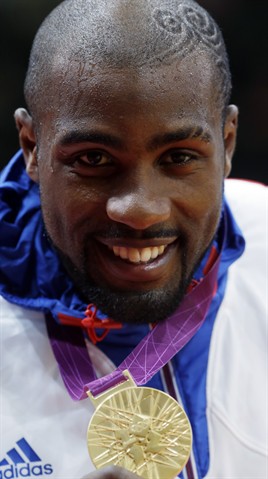 In training, Riner said he sometimes wrestles up to five people at once to make it more challenging. His coach, Franck Chambily, said a lack of real rivals makes motivating Riner more complicated.

"On Planet Judo, he is all alone. That makes things even harder," Chambily said. "The source of his inspiration — this is what he himself says and I've written it down — is to become legendary. And legendary is perhaps to go and get three Olympic titles."