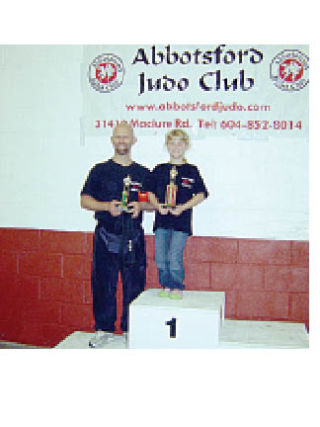 Two members of the Williams Lake Judo Club were in Abbotsford on Saturday, Oct. 23 competing in the B.C. Judo Championships.

Jeff, also a coach at the Williams Lake Judo Club, took bronze at the event, while Georgia, 9, marched back to the lakecity with a gold medal.

Jeff says it’s the first tournament of the year, and a great way to get conditioned for the upcoming season.

“Georgia was really happy with her first-place finish,” he says. “And I was OK with third with it being the first tournament of the year.”

Georgia’s division consisted of two competitors, where she won a best-of-three round robin against her opponent.

“She lost her first match and won her next two,” Jeff says. “There were seven in my division.”

Jeff won three matches (one by default) and lost two.

“Judo is kind of a small community in B.C. so you usually get some of the same people out to the tournaments,” he says. “This is one of the bigger ones, and there were a couple new guys I hadn’t seen before and a couple of the old guys, too — the regulars.”

Georgia’s division was scored during a one-and-a-half minute match, with judges keeping track of throws.

“If you had a good throw they stood you up and you’d keep going,” he says.

Jeff’s division consisted of five-minute matches. “When it’s over, it’s over,” he says. “When you get thrown, it’s the end. Or, you can win on the ground with hold-downs and chokes.”

Jeff is also inviting newcomers to try out the sport. The Williams Lake Judo Club, located at 360 B Mackenzie Ave., holds classes Mondays and Wednesdays.