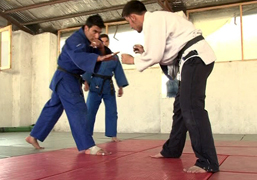 It has been two months since the National Judo team is preparing for the championships.

The 16th round of Asia championships that will be kicked off in 12 November in Gwangju will last for 15 days.

The Afghan Judo team consists of four athletes including a woman.

The overall number of athletes from Afghanistan that will participate in the championships in 12 different sports reach 103.

After Olympic Games, Asian championships are one of the important events in the sports world in particular in Asia and a number of countries take preparations some two years prior to the championships.

"Asian Olympic Games are the strongest ones. We have participated in an International Judo championships in Japan in which Japanese athletes won 8 gold medals, 4 silver medals and 8 bronze medals," said head of Afghan Judo Federation, Zekreya Asadi. " Japan, Korea and most of the other Asian countries are participating in the championships and we wish to have achievements in the games."

An athlete who is going to participate in the championships said: "we try hard and work out a lot and we hope that we would be able to have some achievements for our country."

Some two months ago, three Afghan Judo athletes participated in the international Judo championships held in Japan, but returned to Afghanistan without any achievements.