The World Judo Championships 2014 opened on Monday with two world champions being crowned in Chelyabinsk, Russia after a scintillating first day of action.

Russia’s insatiable passion for judo and their standing in the sport is known throughout the world but will reach even greater heights by successfully hosting the first World Championships to carry Rio 2016 Olympic qualification points in this cycle.

Two world titles were awarded on the opening day as the women’s -48kg and men’s –60kg judoka were the first judoka to grace the tatami at the Traktor Arena and win the respect of the teeming crowd along with new fans around the world.

Before the final block, the organising committee staged a spectacular opening ceremony which had it all. The high-octane show featured dancing, singing, acrobatics, cheerleaders, break-dancers and a Siberian tiger which left a lasting impression for the audience watching in the venue and around the world.

Mr. Pavel KOLOBKOV, Deputy Minister of Sports of the Russian Federation and Sydney 2000 Olympic fencing champion, said: “This competition will foster the promotion of martial arts, it will be a great physical show showcasing technical skills, tactical excellence and strengths of spirit. I wish everyone success during the competition over the course of the week.”

Mr. Boris DUBROVSKY, Acting Governor of the Chelyabinsk region, said: “Good evening everyone, it was Jigoro Kano who developed judo, we value the traditions and friendship of the sport he created. We’re happy to welcome judoka from all over the world. These World Championships take place in the Urals, the World’s oldest mountains which are also a belt, Russia’s stone belt. I am proud that my country and native region is hosting the World Championships 2014.”

Mr. Vasily ANISIMOV, Russian Judo Federation President, said: “I am glad to see Russia hosting the main tournament of the IJF World Judo Tour. The World Championships were held in the USSR in Moscow in 1983 and the World Open Championships were staged in Tyumen in 2011. I have no doubt that the competition will make history and encourage a new generation to take up judo. Chelyabinsk is one of Russia’s most athletic regions and hosted the European Championships in 2012. The level of event was highly praised and was followed by the triumph of Russian judoka at London 2012. Since then we’ve see a nationwide rise of judo. I express my gratitude to Mr. Boris DUBROVSKY for support and assistance to help develop judo in the region. I am sure that the World Championships will be an outstanding tournament.”

“All day long, we have seen world class fights with total engagement of the athletes. Because we have an important number of competitors, some of the first fights show a difference in the level of the two competitors, but round after round, we have seen incredible judo and a lot of ippons. It’s also important to underline the fair play of the public. The Russian audience understand judo and that is really positive.”

Japan lead the medal table after day one with one gold medal and one bronze medal ahead of Mongolia and hosts Russia.

The action continues on Tuesday as day two will crown world champions in the men’s -66kg and women’s -52kg categories.

Tokyo Grand Slam winner KONDO Ami (JPN) produced the finest performance of her fledgling career on the biggest stage of the IJF World Judo Tour to win -48kg gold. KONDO, 19 had made significant inroads on the circuit over the last year but stepped up another level with victory of the Beijing 2008 Olympic bronze medallist Paula PARETO (ARG). The veteran PARETO is a class operator and has long ruled her continent but was still regarded as fringe hope for world title honours. The rivals could only by separated by shido penalties as PARETO, who was unable to match the industry of KONDO, was penalised twice for passivity while the Japanese fighter had an unblemished record. As she stepped off the tatami, KONDO put her head in her hands as she felt the greatest emotion of her career and had a beaming smile as she jumped into the arms of her coach. KONDO said:” I am very glad with the result and my performance.”

In the first semi-final PARETO defeated Amandine BUCHARD (FRA) by a waza-ari as the Argentine fighter had too much experience for the French prodigy. In the second semi-final KONDO dismissed Maria Celia LABORDE (CUB) with a barnstorming display which suggested it was going to be her day. KONDO won in 56 seconds as she added to a waza-ari by holding down her opponent in a kesa-gatame for 15 seconds to advance to the final.

The first medal of the World Championships 2014 was won by teenage star Amandine BUCHARD (FRA) who broke down in tears as the magnitude of her accomplishment hit home. BUCHARD, 19, tapped her chest and the French logo on her judogi in a show of pride after defeating ne-waza specialist Alesya KUZNETSOVA (RUS). BUCHARD scored a yuko from an uchi-mata as Qingdao Grand Prix winner KUZNETSOVA, 22, fought to take the contest to the ground at every opportunity but the Frenchwoman stood firm to win bronze.

BUCHARD, who stunned Olympic champion Sarah MENEZES (BRA) in her first contest, said: “I am a little disappointed because I really came for the gold, but at the same time I am happy to have that medal today around my neck. Those were my first Senior World Championships and it’s been many years now that France didn’t win a medal in this category. I am the youngest of the French Delegation and I am sure that it will boost my teammate in the upcoming days. Today once again I defeated the Olympic Champion, Sarah Menezes (BRA). It shows that the young generation is pushing hard towards the next Olympic Games."

The second bronze medal was won by Havana Grand Prix winner Maria Celia LABORDE (CUB) who defeated teammate Dayaris MESTRE ALVAREZ (CUB) by osaekomi-waza only moments after teasing a drop-seoi nage which caught MESTRE ALVAREZ off guard and had scored a yuko.

Paris Grand Slam winner GANBAT Boldbaatar (MGL) made history for his country as he won Mongolia’s first men’s -60kg world crown against European champion Beslan MUDRANOV (RUS). GANBAT, who finished fifth a year ago, was a different fighter today as he found his rhythm and his judo flowed. Both judoka were tentative as they were contesting the first World Championships final of their careers and it was the Mongolian who topped the medal podium on shido penalties with three against MUDRANOV and two against GANBAT.

In the first semi-final MUDRANOV ended the reign of TAKATO Naohisa (JPN) whose international unbeaten run, which stood since 2012, was ended in Chelyabinsk.

The home fighter scored a yuko with ashi-waza before TAKATO, whose face is on billboards promoting the event throughout the city, levelled with the same score. TAKATO was penalised with a shido for stepping out of the area and that proved the deciding act of the contest as the home fans raised the volume for the result.

In the second semi-final GANBAT beat Amiran PAPINASHVILI (GEO) on shido penalties. GANBAT, who was one of Mongolia’s leading hopes in Chelyabinsk, was penalised twice while his Georgian opponent and Havana Grand Prix winner PAPINASHVILI infringed on three occasions.

The first bronze medal was won by PAPINASHVILI who defeated former European Championships bronze medallist Artiom ARSHANSKI (ISR). PAPINASHVILI trailed by a yuko as ARSHANSKI pivoted on the spot to score an ouchi-gari but delivered a sublime piece of judo befitting of the stage as he attacked with a drop seoi-nage and showed stunning footwork to add a leg attack in a secondary motion in the form of an ouchi-gari.

The second bronze medal was won by TAKATO who bested surprise contender Aibek IMASHEV (KAZ) who until today was best known for winning the Prague European Open. IMASHEV showed his worth by countering a TAKATO attack by sweeping him for a waza-ari before the class of the Japanese star told as a ura-nage sent the spirited Kazakh to the tatami for ippon.

Plus a look back at last years World Championships: Women -48kg & Men -60kg 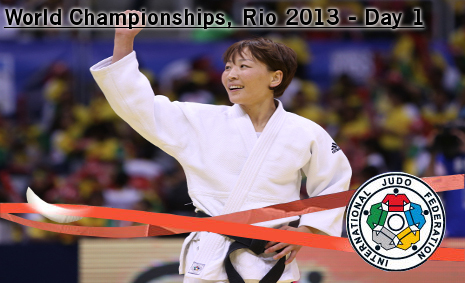